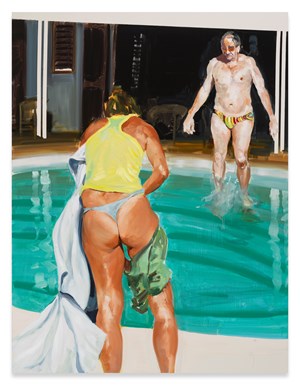 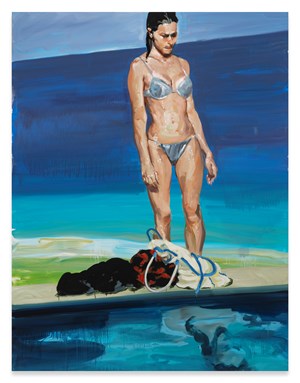 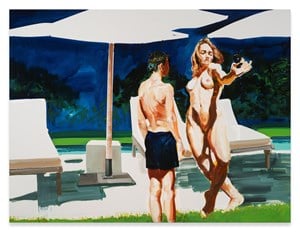 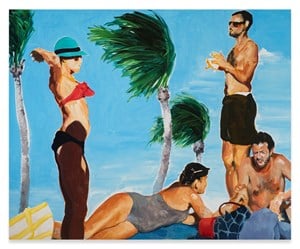 For over four decades, Eric Fischl has produced uncompromising images of American society, as seen through the lens of middle and upper class malaise. Figures routinely share space on his canvases, yet their gazes rarely meet; even when they do, through composition, pose and gesture, they are trapped in the midst of strained exchanges that in turn impel the viewer to examine his or her own relationships and sense of self. Monika Sprüth and Philomene Magers are pleased to present Complications From an Already Unfulfilled Life, the first solo exhibition of Fischl's paintings in Los Angeles in twenty-five years, and his first with the gallery. The exhibition includes a series of recent works centred on bodies of water: pools, oceans and lakeside views provide the settings for images of aspiration, desire, frivolity and ennui.

Fischl's virtuosic technique is as apparent as ever in these new works. Using a combination of densely layered washes, quick improvisational strokes, subtle lines of dripping paint, and areas of canvas left untouched, the artist displays his impressive ability to render flesh, light, reflection and liquid in a style that remains entirely his own. He attended the California Institute of the Arts in the 1970s at a moment when painting was considered a medium in crisis, and immersed in the school's conceptually oriented milieu—generated by professors such as Allan Kaprow and John Baldessari—he never received formal training as a painter. He therefore developed his own painterly vocabulary, devising an idiosyncratic approach to building compositions progressively and intuitively using a range of marks, skewed perspectives, and charged emotional and psychological content.

It is this incessant tension, which Fischl builds into each canvas through the interrelations between his characters and the spaces they occupy, that forms the core of his oeuvre and has continually set his work apart amid an ever-shifting field of contemporary art. In The Exchange (2019), two standing figures frame the work vertically, staring off in separate directions, absorbed in their own thoughts and dialogues. Creating a horizontal axis below them are another couple, their hands overlapping but their lines of vision interrupted by the man's uncomfortable grimace. Complicating the composition yet further is the expansive sky that plunges to the bottom of the canvas, with no horizon line in sight. Palm trees whip in an intense wind that doesn't seem to affect the figures, as if this were a movie-studio backdrop. As with so many of Fischl's paintings, he offers only hints at a narrative, and our natural instinct as viewers is to flesh one out despite knowing there may in fact be none to discover.

Though pools and beaches suggest a certain level of financial achievement and freedom, they are no longer signs of upper class belonging, so much as the desire and scramble for upward mobility that affects many Americans. This commonplace quality extends to the bodies of Fischl's characters. Some do have idealised figures, including the voluptuous woman snapping a suggestive selfie in The Artist's Assistant (2018), or the limber couple and baby in Unwinding (2018), who adopt the postures of a modern day Grecian Laocoön. Yet most have the same sagging areas, ageing features and asymmetry that characterise the majority of men and women, adding another level of self-recognition and approachability to Fischl's nonetheless enigmatic scenes. The partly deflated turtle pool float in Something Lost (2018) might be seen as an allegory for the capitalist human condition in the early twenty-first century, and for the exhibition's message overall: things feel half empty, out of breath and darkly comical, but a still-attractive synthetic sheen.

To form his alluring compositions, Fischl regularly works from a compendium of imagery compiled over time, both from photographic sources and memories, many of which have included water. Figures that he encountered in the past may work their way into canvases years later, or elements might repeat across different works, such as the red dock in both Complications From an Already Unfulfilled Life (2019) and A Surprising Sense of Urgency (2019), which applies compositional, and by extension psychological, pressure onto the tremulous waters and figures below them. In the context of Los Angeles, the notion of water takes on new layers of meaning, not only due to the city's proximity to the Pacific and its ongoing history of drought, but also in the omnipresence of pools, from commonplace apartment-complex watering holes to the luxurious water features in the homes of the rich and famous. Yet, far from suggesting a clichéd relationship to the city—despite a few glimpses of palm trees and bikinis—Fischl's new paintings continue his forthright examination of missed human connections, nostalgia, ego and the struggle to 'make it' in America.

Complications From An Already Unfulfilled Life 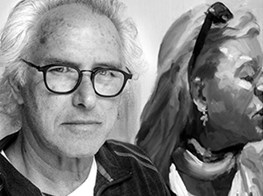 Bodil Blain: How do you take your coffee? Eric Fischl: I love my coffee. I have a bean-to-cup machine and I use roseline. BB: How has the new US political landscape affected your work? EF: Over the last few years, since the election cycle that brought Trump into power, there has been an apotheosis of something that had been building...

Sign up to be among the first to know when new exhibitions by Eric Fischl or at Sprüth Magers open.