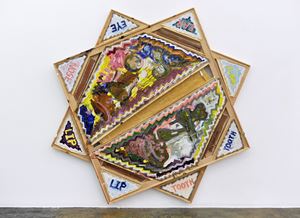 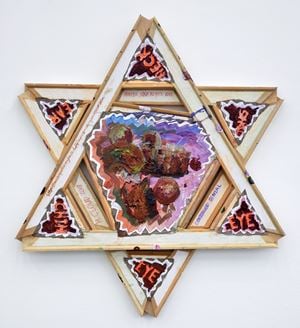 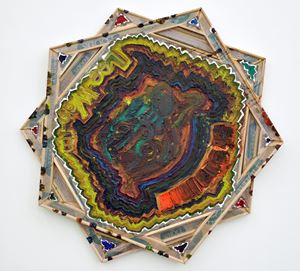 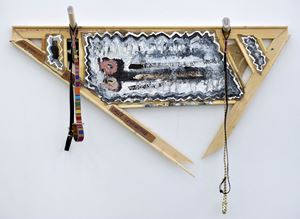 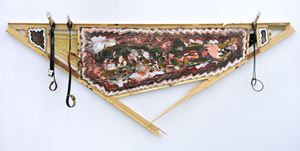 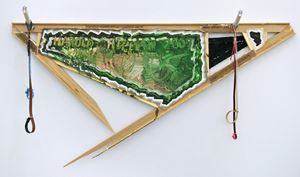 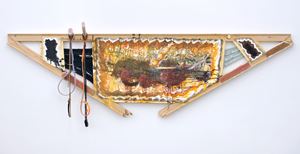 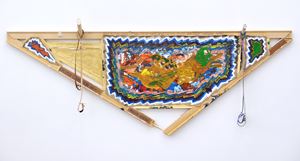 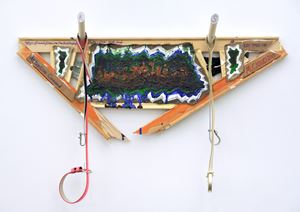 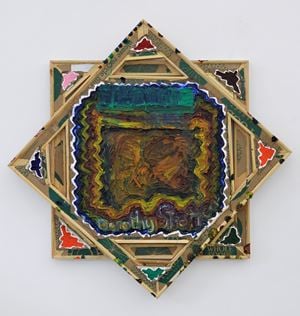 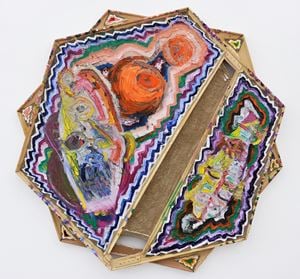 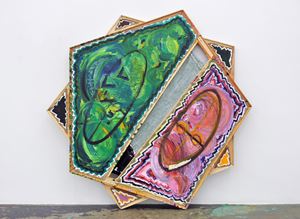 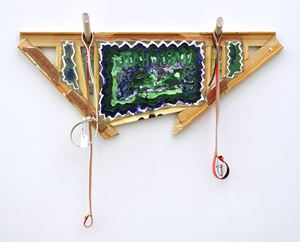 Thomas Erben is very excited to present artist Mike Cloud's fourth exhibition with the gallery, Tears in abstraction. In these works, Cloud speaks to the suffering of a series of named individuals, addressing their trauma within the language of abstraction. Collecting his new Hanging and Beheading Paintings, the show further elaborates the artist's continuing exploration into painting's intrinsic relationship to death. Cloud uses abstraction to offer the viewer an aesthetic account of individuality, death and the empathic space of communion in absence of the political mechanisms of personal, racial, cultural and gendered identification.

Tears in abstraction finds the artist, for the first time, embracing the individual subjectivities of notable and mundane contemporaries, connected only by the physical circumstances of their deaths. The key question Cloud asks is what type of knowledge does a viewer need in order to connect with a particular individual's worth, suffering and reality.

As in his previous work, Cloud builds irregularly shaped canvases that wed the frame and painted surface into an entangled whole through sculptural strategies. By combining his conceptual approach with a material richness and a sensual handling of wet-into-wet technique, Cloud continues to reveal the range of significations connected to shapes, surfaces and symbols in an infinitely malleable, direct and forcefully abstract mode.

In one Beheading Painting, Dorothy Stratton, Cloud stacks two square frames one atop the other to create an eight-sided star. The subject of the painting is a Playboy Playmate infamously murdered in 1980. The star shape lends the canvas a twinkling, spinning appearance, which is intensified by an undulating rainbow of colour that encloses the chaotic void of thickly painted texture at the work's centre. Strips from Whole Foods grocery bags collaged upon the stretcher bars and hand painted text spelling out the subject's name are the painting's only legible features. Here destruction allows the artist to create, in his words, an avantgarde portraiture not bound by the rules of anatomy, but instead by purely expressive compositional and aesthetic goals.

In comparison, Cloud's Hanging Paintings are more fragmented and broken than his Beheading Paintings. On one level they are small shrines—triangles made from pairs of parallel stretcher bars, the lowest of which is broken in half and opened downward to create a triangular framework for a small, rectangular abstraction. Adorning the upper bar are several pegs on which the artist has hung individual, looped belts. The resulting tableau unmistakably evokes the works' titular act of hanging and of suicide, but these rows of pegs also bring to mind hat-racks and gathering places. Displayed as a group as they are in Tears in abstraction, these Hanging Paintings lose their feeling of isolation. The names of the deceased are inscribed on cardboard plaques glued onto the stretcher bars along with additional titles (e.g. 'good-natured certainty'), connecting them to an even wider set of references.

Cloud sees the age we live in as an age of destruction and contempt for compromise: 'We hurt the Other, the Opposite Number, the Opposition. Before we attend to our own happiness, we need to find destruction for the other. From a metaphysical perspective, all human beings are created equal and it is possible to identify with all of our suffering. That possibility is called Religious Love. Without that religious love we cannot hope to identify with the non-identical suffering of the world. In my paintings I make space to contemplate the other, their suffering and their reconciliation to their world.'

Mike Cloud is a Chicago-based artist whose work examines the conditions of painting in its contemporary life among countless reproductions, symbols and descriptions. After studying at the University of Illinois at Chicago, Cloud earned his MFA from Yale in 2003. His work has been extensively shown, at venues such as MoMA P.S.1, Marianne Boesky Gallery, White Columns, Max Protetch, Apexart, and has been included in group exhibitions, such as Frequency at the Studio Museum in Harlem and Honor Fraser Gallery. In addition to numerous reviews, his work was part of Painting Abstraction by Bob Nickas, Phaidon Press (2009). He has been awarded the inaugural Chiaro Award from the Headlands Center for the Arts, CA; a New York Foundation for the Arts Fellowship and residencies at the Meulensteen Art Centre in the Netherlands as well as the Sharpe-Walentas Studio Program in New York. Cloud is currently an Associate Professor at the School of the Art Institute of Chicago. This is the artist's fourth exhibition with the gallery, including a solo presentation of his work at Art Basel Miami Beach, 2016. 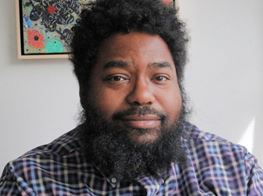 As is usual for Cloud, his new works-arrangements of exposed stretcher bars and paint-slathered canvas—are as much relief sculptures as paintings. 'I've always felt that there was a really strong formal noise created by the format of painting,' Cloud told me as we walked through the exhibition. 'If you have a big, rectangular, unbroken... 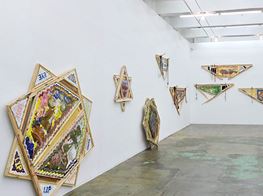 When I learned to paint fifteen or twenty years ago, the dominant ideology was late modernism. In that ideology, painting was a territory where each painter staked a small aesthetic claim. There was room for all the painters because we dug downward in search of formal riches rather than moving outward into one another’s territories. So one painter... 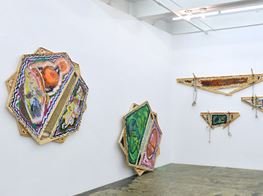 Paintings are social structures, which is why their inherited authority needs to be short-circuited as part of the artistic process. That is our job as cultural producers. Remarkably, most paintings that appear on the walls of the best galleries (and also the striving ones) aren't interested in doing that. Instead, we are awash in whole-hearted...

Sign up to be among the first to know when new exhibitions by Mike Cloud or at Thomas Erben Gallery open.
Sign UpLogin