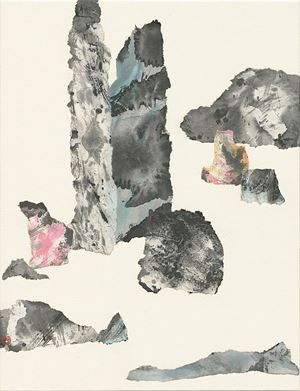 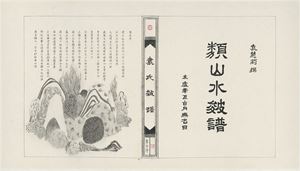 To welcome spring 2021, the Tina Keng Gallery is pleased to present Hidden Emotion in Texture, Yuan Hui-Li's latest solo exhibition — a culmination of her painstaking efforts of the past four years — in the exhibition hall on the underground floor.

Cun (皴), or texturising, is one of the essential techniques in traditional shanshui painting, as well as the primary subject in the revolution of contemporary ink painting. Evolving from an ancient, fundamental ink technique to a contemporary emphasis on physical texture, how can texturizing further transform itself?

Guided by female consciousness, the artist came to the realisation that shanshui painting chronicles a history shaped by the male perspective. Female painters are often considered an auxiliary of the male-dominated ink discourse, where a vocabulary of form and meaning developed by the female consciousness is absent. How should the female consciousness be embedded in the texturising method, and change the way this technique has been applied to simply refer to nature? This question has galvanised Yuan's 'Ambiguous World' and 'THEY Shanshui' series, and led at last to 'Manual of Yuan's Texturizing Strokes,' where she has found answers.

Intriguingly, this artistic pursuit parallels Yuan's personal journey, as she combines her emotional vicissitudes with her interrogation of history. The inception of 'THEY Shanshui' (previously titled 'Ambiguous World') arose from the artist's emotional setbacks in 2007, prompting a self-healing process through shanshui painting. When she realised the great gap between how cun creates point, line, and form in rendering nature, and how she expresses personal emotions, the frustration of portraying her interiority was magnified. She began to contemplate how to interpret those surging feelings. The forms in the 'THEY Shanshui' series that mimic peaks and valleys are in fact a metaphor for physical and emotional reactions. The cun technique of 'THEY Shanshui' turns out to be a method of texturising and manifesting the psychological state of being.

In the decade-plus-long self-healing process, the artist transmutes emotions into various cun techniques in the 'Ambiguous World' and 'THEY Shanshui' series. Thirty-two styles have been selected and compiled into the Manual of Yuan's Texturizing Strokes. Emulating the style of Qing-dynasty Manual of the Mustard Seed Garden (1679), this work recasts the traditional school of cun through a female lens, transfiguring shanshui painting in contemporary terms.

As early as 1992, the artist has begun her investigation of the materiality of ink, leading to a mélange of color blocks in her 'Discrete Islands' series. For this exhibition, she presents the 'Intrinsic Potential Landscape' series, which parallels 'Discrete Islands,' as her latest attempt to incorporate canvas with collage as a stylistic contrast to 'THEY Shanshui.' The 'Intrinsic Potential Landscape' comprises freehand brushwork that highlights the synergy between ink and rice paper, which is then torn into pieces reassembled to form shapes that evoke landscapes. Creating a collage of blocks helps the artist in identifying the antagonistic relationship between freedom and control.

This antagonistic relationship becomes the artist's preferred tool to create elusive structures of continuity and discontinuity. Different from the freestanding ink blocks of the 'Discrete Islands' series, 'THEY Shanshui' is largely characterised by multihued textured blocks organised in unbroken arrangements. It is the artist's belief that while traditional shanshui painting in the age of feudal empires is dictated by a single cun method to create an ideal of harmony, the intermingling of dissimilar blocks in 'THEY Shanshui' mirrors the multifarious voices of the world today. Such belief is also encapsulated in her video work Displacement Plan: Displacing Guo Xi's Early Spring in THEY Shanshui.

Her aesthetic concept of juxtaposed differences is reaffirmed in the titling of her 'THEY Shanshui' series. 'THEY' is inspired by the creature Lei (類) from the Classic of Mountains and Seas. Part human, part cat, Lei was a hermaphroditic creature that eludes gender boundaries. The Merriam-Webster Dictionary announced in 2019 that 'they' can be used as a singular or plural pronoun that refers to someone whose gender identity is neither entirely male nor entirely female. To the artist, this idea echoes the decentralisation, nonbinariness, and ambiguity in her work. Both Lei and They are distinguished by their inherent juxtaposed differences and evasive state of being.

Through her investigation of cun, the artist subverts the ages-long tradition of ink by reconstructing form and meaning in the Manual of Yuan's Texturizing Strokes and 'THEY Shanshui' series, where juxtaposed differences emerge as her aesthetic concept, collages of blocks as her painting style. Unhindered, she moves between emotion and materiality, tradition and contemporaneity. While the exhibition delves into hidden emotion in texture, it reveals in the form and meaning of cun blocks the artist's subjectivity, not in physical manifestation, but in spirit and interiority hidden in plain sight.

Born in 1963 in Taipei, Taiwan, Yuan Hui-Li is also known as Yuan Shu. She received a bachelor's degree from the first Chinese ink painting program of the National Institute of the Arts (now TNUA) in

Sign up to be among the first to know when new exhibitions by Yuan Hui-Li or at Tina Keng Gallery open.
Sign UpLogin