Tina Kim Gallery is delighted to present a solo exhibition of paintings and sculptures by New York-based artist Davide Balliano.

Grounded in a philosophical discourse surrounding nature versus technology and time versus space, Balliano’s work reflects on the interdependence of these forces relative to the human condition. In his newest compositions, the artist has begun to articulate a clearer background and foreground with even greater contrasting black and white compositions. By offering a greater sense of depth to his complex geometrical forms, the artist frames a visual dialectic suffused with the human experience.

The paintings in the exhibition continue Balliano’s exploration of patterns reduced to their most basic contours; for the artist, this interest is exemplified in this use of different wave patterns. In these new works, he has successfully layered the dimensions of these forms setting them into motion. This understanding of how a symbol can be activated optically underlies Balliano’s interest in consciousness and the way the mind uses logic to interpret visual phenomenon.

In addition to his paintings, Balliano continues to use sculpture to investigate the intersection of material, form and symbols in contemporary culture. His appropriation of the arch poetically merges this interest in 2 and 3D, using ceramic and stainless steel. Historically, the arch was used in architecture as a necessary element for structural stability and egress. Balliano plays on this expectation of stasis and movement, eliminating the arch’s functionality in his sculptures and instead focusing on its central role as a threshold. The resulting work leaves viewers with an implicit invitation to look through and beyond the work to confront themselves.

Davide Balliano (Turin, IT 1983) is an artist whose research and material investigation skillfully merges painting and sculpture. Utilising an austere, minimal language of abstract geometries in strong dialogue with architecture, his work investigates existential themes including the nature of humanity in the age of technology and man’s relationship to the sublime.

Through a practice that is self-described as monastic, austere and concrete, Balliano’s meticulous paintings appear, upon first glance, clean and precise. However, closer inspection reveals scrapes and scratches that uncover the organic wooden surface underneath the layers of paint and hint at the decaying façade of abandoned modernistic intentions. This interest in the resonance of materials underlies his sculpture as well.

He lives and works in New York City. 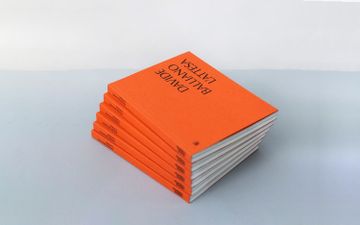