An increasingly prominent voice among a new generation of figurative painters, Doron Langberg has gained a reputation for works that, luminous in colour and often large in scale, hinge on a sense of intimacy. Depicting himself, his family, friends, and lovers, Langberg's paintings celebrate the physicality of touch—in subject matter and process—a closeness that engages with new dialogues around queer sensuality and sexuality. Speaking about his work the artist says, 'Queerness for me is not just a sexual experience, but a way of being in the world which affects every aspect of my life. Using intense colours and different paint textures and marks to create these everyday scenes, I want to connect with a viewer by speaking to our most basic commonalities—our bodies, our relationships, our interiority—rather than the social categories that may separate us. In creating this connection, I want to make queer pleasure, friendship and intimacy feel expansive and generative, embodying the full range of human experiences.'

Often orchestrating multiple figures, as well as details of textiles, clothing and interior patterns, the artist works initially directly from life, making small-scale works that generate ideas about mood and colour palette in addition to likeness—or, more importantly, as Langberg puts it, the sense of a 'living person'. From these improvisational sessions he builds compositions in which figures often appear to move in or out of focus, emerging from or receding into their surroundings. This dynamic interplay between people and the places they inhabit, in which areas might appear boldly declarative or remain consciously indeterminate, leaving areas of abstraction, gaps, questions—or breathing spaces—lends the work its distinctive psychological register. The dissolving of boundaries, meanwhile, speaks of inner and outer worlds, not only those occupied by the subject of each painting but by the artist and viewer as well. As complex as they are seductive, Langberg's paintings invite an encounter between subject and viewer. A slow unfolding of colour, form and materiality creates, in the words of the artist, 'a different relationship between the viewer and the figure, perhaps a more empathic relationship.'

Born in 1985 in Yokneam Moshava, Israel, Doron Langberg currently lives and works in New York City. He received his MFA from Yale University School of Art, holds a BFA from the University of Pennsylvania, a Certificate from PAFA, and attended the Yale Summer School of Music and Art, Norfolk. Langberg has attended the EFA Studio Program, Sharpe Walentas Studio Program, Yaddo artist residency, and the Queer Art Mentorship Program. He is the recipient of the American Academy of Arts and Letters John Koch award for painting, the Elizabeth Greenshields Foundation Grant, and the Yale Schoelkopf Travel Prize.

Langberg's first solo exhibition at Yossi Milo Gallery, New York, was held in 2019. Works by the artist will feature in the forthcoming exhibitions: Intimacy: New Queer Art from Berlin and Beyond, at the Schwules Museum, Berlin (27 November 2020–25 February 2021); and Breakfast Under the Tree, curated by Russell Tovey and Robert Diament, at Carl Freedman Gallery, Margate, Kent (8 November 2020–17 January 2021). Langberg's work will be included in a major group exhibition at the Institute of Contemporary Art/Boston in 2022. Previously, his work has been shown at institutional venues including the LSU Museum, American Academy of Arts and Letters, Leslie-Lohman Museum and The PAFA Museum. His work is in the collections of The PAFA Museum and RISD Museum.

In the public realm, a reproduction of Langberg's Joe and Edgar (2020), can currently be seen in New York as part of Public Art Fund's Art on the Grid, a city-wide initiative featuring 50 emerging artists. 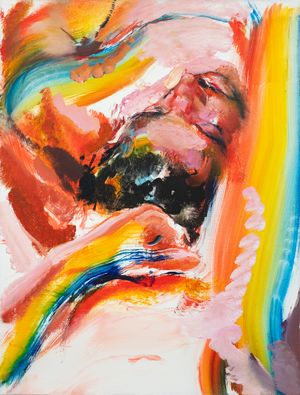