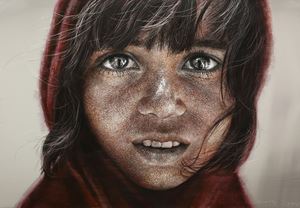 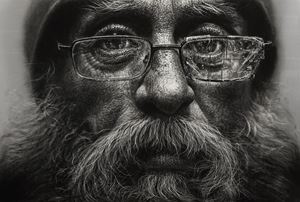 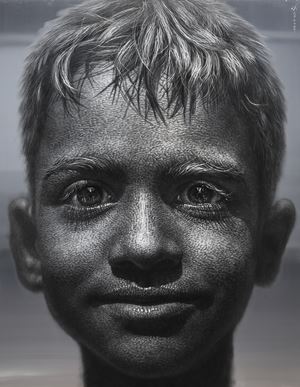 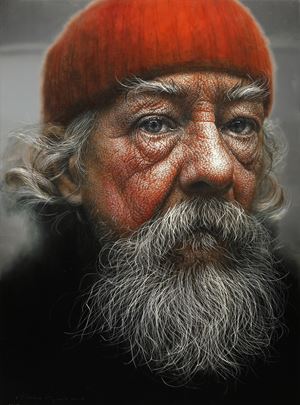 Whitestone Gallery is proud to present FACE, an exhibition of scratches and oil on aluminum artworks by the Korean artist Han Youngwook at the gallery's Hong Kong space, H Queen's. On view will be a series of imaginative faces revealed in their most vivid form. The exhibition marks the artist's first solo exhibition in Hong Kong and with the gallery.

Known for his poignant and detailed depictions of human figures that are full of flaws and emotions, Han's choices of subject reflect his personal values and beliefs. For Han, young children represent innocence and a free soul, whereas young women captured at the brightest time of their lives imply ephemerality, and old women embrace reality and bear life experiences. Han's practice is extremely intuitive as he often browses the web or searches in real life for inspiration. Once he has decided and collected a person's image, he tends to explore the person's qualities, and combine his own perception and creativity to convey the person's emotions in his paintings. Sometimes, the same face reappears in a slightly different expression, size, or colour as the result of the artist's attempts to understand the nature of humans and interpret and reinterpret the different layers of it.

Han's works are monumental in size as well as materiality and methods. 13 years ago, the artist started using needles on an aluminum foil, but soon found the limitations of foil and replaced it with aluminum plate. Through a labourious process of repetitively scratching, and colouring and decolouring by rubbing or pressing oil on the surface, the human figures are elaborated and their true character is revealed. Han's works are not complete without lighting, in fact, lighting is intrinsic to Han's works. Different lighting enables different dimensions, depending on the lighting and the angle of the viewer, different energies will come to light. In the end, Han's work is all about synthesizing human energy with materiality.

Named FACE, the exhibition was originally titled 'Übermensch' as a personal ode to Nietzsche's life and philosophy. Though feeling inadequate to live up to Nietzsche's influences, Han eventually changed the exhibition title to FACE, his works are still embedded with Nietzsche's idea of the 'Übermensch'. Meaning self-overcoming, 'Übermensch' is an attitude towards life that helps one justify the existence of the human race and use will-to-power to influence and dominate. The concept is also an approach to deal with the 'truth' in an individual and sensitive manner, rather than rationalism. In a similar fashion, Han's works focus on expressing human emotions, rather than portraying an object in an extremely realistic way. Often miscategorised as hyperrealism, Han explains that the essence of his paintings lies in the human spirit, therefore, he is an expressionist painter.

In the exhibition FACE, red and black are ruling the aluminum plates. These two colours hold special meanings in the artist's paintings. While red and black both symbolise human desire, red is the desire that erupts, and black is the conflict. Han believes that 'the core of painting is to bring out the essence of existence through facing the existence, and the role of painting is to act as a pathway to connect the material to the mind'. Han is particularly excited to be showing his works in Hong Kong - one of his favorite cities. He hopes that the viewers will be able to scratch the surface and explore the deeper layers of his paintings.

Sign up to be among the first to know when new exhibitions by Han Young Wook or at Whitestone Gallery open.