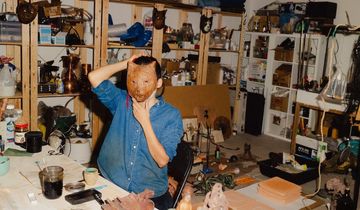 Utilising unconventional materials, such as tobacco, tea, urine, and living insects, Candice Lin creates immersive and sculptural installations that explore the narratives embedded within objects. Recurring themes in her work include the interrelationships between colonialism, commercial trade, labour, and the history of racialisation.

Candice Lin's concern with the legacies of colonial trade is evident in her early works. It Makes the Patient See Pictures, her 2012 solo exhibition at François Ghebaly in Los Angeles, for example, included figurines with phallic-shaped heads that reference the 19th-century Yoruba carvings of Queen Victoria.

In A Body Reduced to a Brilliant Colour, a 2016 solo exhibition at London's Gaswork, Lin explored the relationship between bodies and commodities. System for a Stain (2016) is an apparatus installed to distill sugar, tea, and cochineal—some of the key commodities brought to Europe from its colonies—into a red fluid that was released onto the floor. In another installation, A Warner for Survivalists: White Gold (2016), live Madagascan cockroaches were placed into a glass container and made to feed on candied orange, another commodity resulting from European colonisation and an allusion to the extractive labour used to procure such goods.

Candice Lin has also investigated the lesser-known aspects of Chinese migration, not only to the Americas and Britain but also to their colonies. La Charada China, an installation conceived for MADE IN L.A. 2018 at the Hammer Museum, Los Angeles, consisted of an earthen platform surrounded by seeds and guano in a reference to 19th-century indentured labourers.

Candice Lin: Pigs and Poison (2020), the artist's major solo exhibition at the Govett-Brewster Art Gallery in New Plymouth, New Zealand, explored the relationship between history and the movement of people, plants, and commodities through existing and commissioned works. Central to the exhibition was Lin's research into 19th-century indentured labour, also known as coolie labour, in which Chinese and Indian labourers working in the Americas and Britain were pejoratively referred to as pigs.

The entrance to the exhibition was a sculptural installation, titled A Robot Wrote What My Father Spoke (2019), in the shape of a metal gate. Chinese and English characters were cut into its walls, including the phrase 'meaningless squiggles', a term used by American philosopher John Searle to describe what he perceived to be the cryptic nature of the Chinese language. As a gate, A Robot was dysfunctional: Lin lined the walls with barbed wire and placed a pair of vigilant eyes on doors that never opened. The actual entrance, in fact, was through a hole on the side of a wall.

Pigs and Poison also saw the artist work with VR for the first time. Placed throughout the exhibition were lumps of wax, pigment, and lard made to resemble flesh. Upon wearing the VR headsets, which were fashioned like plague doctor's masks, viewers could see virtual lumps of flesh tumbling into view. In a virtual walkthrough, Lin explained that she had been inspired by the racialisation of viruses and contamination throughout history: during the Black Plague, a rumour attributed its spread to Mongols using carcasses as weapons; in 19th-century Europe, racist depictions of Asians as being unsanitary prevailed in cartoons.

Pigs and Poison travelled to Spike Island, Bristol, in 2020 and Guangdong Times Museum in China in 2021.

Candice Lin holds an MFA from the San Francisco Art Institute (2004) and a BA from Brown University, Rhode Island (2001). The artist has been living in Los Angeles since 2005.

View All (8)
Ocula News Christina Yuna Lee, Art Worker Murdered in New York, Remembered at Eli Klein Gallery New York, 11 April 2022 Half of sales from the gallery's memorial exhibition will go towards a fund that has already raised over $400,000 for causes Lee loved.

Read More Ocula News Venice Biennale 2022 to Reframe Art History as a Story of ‘Symbiosis, Solidarity, and Sisterhood’ Venice, 4 February 2022 The event's main exhibition will explore the representation of bodies and their connections with technologies and the Earth.

Read More Ocula News Prospect New Orleans Begins Staged Opening Amid Infections, Storms New Orleans, 27 October 2021 The fifth edition of the triennial was delayed first by the pandemic and then Hurricane Ida. Artistic Directors Naima J. Keith and Diana Nawi were undeterred, emphasising that the event was 'born out of a time of hardship'.