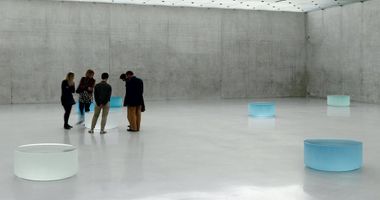 From glass sculptures to photographic installations to works on paper and books, Roni Horn's practice has long explored a plethora of concerns, from the shifting nature of identity and its meaning, to the concept of doubling and the changeability of the weather.

A native of New York, Horn graduated from the Rhode Island School of Design in 1975 and travelled to Iceland. There, she was struck by the country's unpredictable weather and began photographing the landscapes. She returned to the United States and earned her MFA in sculpture from Yale University in 1978, but has been inspired by Iceland ever since.

'To Place', an ongoing book series that begun in the 1990s, thus far consists of ten volumes that examine Iceland's geography, geology, and culture. Folds (1991), for example, focuses on the sheepfolds scattered throughout Iceland. Haraldsdóttir contains images lifted from Horn's photographic series 'You are the Weather' (1994–5), which is comprised of 100 close-ups of a model's face as she stands in water. Her facial expression is slightly different in each picture—a metaphor for Iceland's varieties of weather, light and water.

Similarly based on Iceland is Vatnasafn/Library of Water (2007), an installation of 24 glass columns inside a former library in Stykkishólmur. Horn started working with cast glass sculptures in the mid-1990s, creating often large and coloured cylinders.

For Library of Water, she filled the pillars with melted ice gathered from 24 glaciers as a reminder of the human impact on the environment. The clear glass columns distort the view of the seascape outside while shedding light on the rubber floor, which is incised with words—in both Icelandic and English—related to the weather such as 'foul' and 'moist'. Intended as a site of private meditation as well as community gatherings, the building also holds collections revolving around language, water and weather reports, including recordings of Stykkishólmur and nearby residents discussing the weather.

Horn's fascination with the dynamic nature of weather is parallel to her interest in the multiplicity and mutability of identity, explored through her self-portraits in various media. In a 2009 article in W Magazine, for example, she described the stainless steel and copper balls in her 'Asphere' (1988) series as a form of self-portrait. Despite their initially spherical appearances, the balls have inexact dimensions that compel the viewer to look at them twice.

Horn's representation of herself similarly attempts to resist straightforward identification. This was directly addressed in the photographic series 'aka' (2008–9), for which Horn arranged pictures of herself to convey her ever-changing identities, from a frizzy-haired youth to an androgynous and middle-aged individual. The transformations in some images were extreme to the point that it becomes difficult to recognise the subject as Horn.

Inanimate objects stood in for the artist in the 'self-portraits' that comprised 'The Selected Gifts, 1974–2015' (2015–16)—a photographic series that portrayed Horn through the gifts that she had received over the course of four decades, from letters and books to a stuffed swan and Flintstone figurines.

Drawing is also an indispensable aspect of Horn's practice. Her drawings often resemble elements of nature, such as clouds dropping rain in Yet 3 (2013–17), or organs, such as the kidney-like form in Or 1 (2014), or the brain in Such 6 (2014). In addition to graphite, Horn employs materials as diverse as powdered pigment, ink, charcoal and watercolour.

Horn's 'Hack Wit' (2013–15) series works began as watercolour drawings of idiomatic expressions that she cut apart—paper included—and reassembled to create one nonsensical sentence. In Hack Wit—rainbow oblivion (2014), for example, the phrases 'consign to oblivion' and 'chasing rainbows' become 'consign the rainbow to chasing oblivion' while Hack Wit—aching cheap (2014) reads, 'A cheap suit all over me like an aching void'.

In 2009, the Whitney Museum of American Art and Tate Modern organised a retrospective of her work titled Roni Horn aka Roni Horn that travelled to Collection Lambert, Avignon, and The Institute of Contemporary Art, Boston.

View All (5)
Ocula Feature Venice Post-Mortem: Reflections on The Milk of Dreams* By Stephanie Bailey

The nomadic European biennial has the near unparsable title it matters what worlds world worlds: how to tell stories otherwise.

The artist has garnered a distinguished international reputation for her extensive practice, which explores the dynamism of the natural world.

To get to Roni Horn's home and studio in upstate New York, you drive through farm villages, past horses grazing on meadows, and after a few turns, reach a gate leading to a rugged dirt road. Even on a

'You got some good questions for me?' Hard to say if Roni Horn was being friendly, impatient or intimidating. She exudes classic New York directness, which some might see as abrupt. She had a head co

There is something about the gauzy lighting at the Menil Drawing Institute that makes me mistrust my eye. A scrim seems to hang in the air, making the walk toward Roni Horn's drawings especially dream

American artist Roni Horn has something akin to an illusionist's ability to make you do a double take, stand still and figure out what it is you are actually seeing, which is quite a feat in an age of

Sign up to be notified when new artworks and exhibitions by Roni Horn are added to Ocula.
Sign Up Login