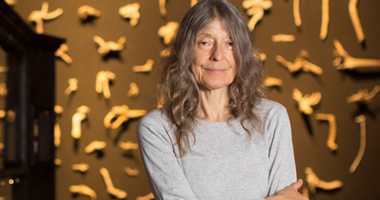 Fiona Hall is a leading contemporary Australian artist. Working across painting, collage, printmaking, photography, sculpture, video, and installation, Hall has exemplified her skill in a diverse range of media in a career spanning over four decades. After initially enrolling for a Diploma of Painting at East Sydney Technical College, Hall became more preoccupied with photography. She exhibited her works for the first time in Thoughts and Images: An Exploratory Exhibition of Australian Student Photography at the Ewing and George Paton Galleries, University of Melbourne, in 1974.

Hall’s choice of material is central to her artistic practice as she attempts to address the relationship between nature and contemporary issues such as globalisation and consumerism. Hall’s fascination with the natural world is an ongoing theme throughout her oeuvre and was explored in Fall Prey, her project for dOCUMENTA (13), in which she constructed the bodies of various threatened species (picked from the International Union for Conservation of Nature and Natural Resources’ Red List) out of the military uniforms of their native countries.

View All (6)
Ocula Feature The National 2021 Finds Ways to Care in Australia By Susan Acret, Sydney

When Silence Falls  Art Gallery of New South Wales, Sydney  19 December 2015 - 1 May 2016 Currently showing in the contemporary galleries of the Art Gallery

Read More
Ocula Feature A report on Australian representation at the 56th Venice Biennale: 'All The World’s Futures' curated by Okwui Enwezor By Tess Maunder, Venice

On the 120th anniversary of its inaugural exhibition in 1895, Nigerian-born curator, Okwui Enwezor, has this year directed the 56th iteration of the Venice Biennale. Titled  All The Worl

Read More
Related Press You'd Have To Be Bonkers: Australians In HK 31 March 2017, The Art Life

Is it only a week since Hong Kong? After a blur of skyscraper light shows, bamboo scaffolding, detour signs, cranes and ferries, it’s hard to believe it all happened. For an international art fair roo

Canberra public and private commercial art galleries continue to hold brilliant exhibitions that challenge conventions and inspire the public. So much so that selecting the top five shows for this yea

When Silence Falls is the second of the Art Gallery of New South Wales’ (AGNSW) Contemporary Collection Projects, a series aimed at highlighting the institution’s own holdings and revealing new connections—or, in their words, “sightlines”—between the artworks. The series launched in 2015 with the exhibition...

Be among the first to know when new artworks and exhibitions by Fiona Hall are added to Ocula.
Sign Up Login