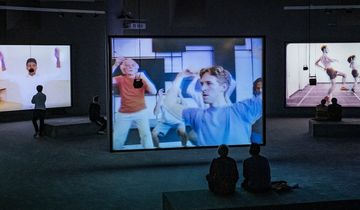 Shaw holds a BFA (1999) from the Emily Carr Institute of Art and Design, Vancouver.

Jeremy Shaw's work draws from a range of sources, from found footage to subcultures of the 1960s and 1970s, and combines elements from belief systems, science fiction, science, and dance to create quasi-documentary-style works.

The artist's ongoing interest in altered states of consciousness and subcultures are visible in his early works. In the documentary-style film DMT (2004), for example, eight individuals—including Shaw—try to explain their experiences with tryptamine psychedelics, while the three-channel video Best Minds Part One (2008) shows footage of people dancing at a hardcore punk concert in Vancouver in slow motion.

Shaw began to garner international attention with his 'Quantification Trilogy' (2014–2018), which comprises quasi-documentary films revolving around 'quantification,' a fictional event that renders fate a predictable phenomenon and eradicates the possibility and purpose of spiritual quests. Though set in a future world, the works evoke the documentary and news report styles from the latter half of the 20th century.

Quickeners (2014), the first in the trilogy, is accompanied by subtitles and a voiceover reminiscent of a 1950s style broadcast. It also features footage from Holy Ghost People, Peter Adair's 1967 documentary about a Pentecostal community in West Virginia, with its audio altered to the point of incomprehensibility.

Dance, an element that recurs throughout Shaw's work, also features in the second and third films of the trilogy. It is present in Liminals (2017), first presented at the 57th Venice Biennale, as well as I Can See Forever (2018), which employs a series of bodily movements in an exploration of dance's potential to transcend corporeal reality.

Transcendence and dance are closely linked in Shaw's works as in the seven-screen video installation Phase Shifting Index (2020). Each featuring dancers, the seven spaces in the videos are located in the 22nd century, although the costumes and grainy video quality recall the 1980s. As Stephanie Bailey notes for Ocula Magazine, 'Together they 'create a dissonant, multi-part symphony composed not only of speech, music, movement, and light, but of temporalities,' which eventually converge into the same rhythm before the screens appear to freeze and melt.

First presented at the Centre Pompidou, Paris in 2020, Phase Shifting Index travelled to the Swiss Institute, New York; the Museum of Old and New Art, Hobart; the Frankfurter Kunstverein; and the Musée d'art contemporain de Montréal in 2020, and then to Kumu Art Museum, Tallinn, in 2021.

In sculptural works and prints based on photographic images, Shaw often explores the manifestations of states that could be interpreted as ecstatic, cathartic, or hallucinatory.

At Selected Facets and Translation, his solo exhibition at KÖNIG London in 2020, the artist presented multi-faceted acrylic frames encasing photographs—many depicting people with their hands raised or brought together in prayer—that appear fractured due to the refractions of the acrylic casing.

CATHARTIC ILLUSTRATION, another solo show at the gallery's Berlin location in 2021, included silkscreen prints based on archival newspaper images, which Shaw reshot and printed to render the figures into uncanny multiples.

Jeremy Shaw has exhibited globally in solo and group exhibitions.

Visual artists, musical acts, a masquerade, and a nude swim are among the rites at this year's winter solstice festival in Hobart, Australia.