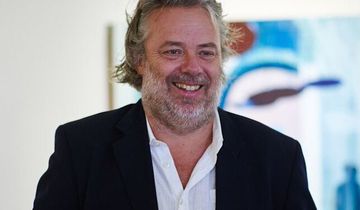 Kenneth Blom is famous for his painting which depicts solitary figures in industrial and empty landscapes. Rendered in broad brushstrokes, these landscapes have a tendency to express moods and states of mind. This is reminiscent of the work of the famous Norwegian expressionist Edvard Munch.

Blom also draws inspiration from the great Norwegian playwright Henrik Ibsen by painting complexities of the human psyche conveyed by human relationships. The figures in his paintings are caught mid-movement, but their faces are blurred. “Their absence becomes more intrusive than their presence,” as Blom put it.

Born in 1967 in Roskilde, Denmark, Blom moved to Norway as a child. He studied at the Statens Kunstakademi in Oslo (1990-1994), as well as at the Düsseldorf Academy of Fine Arts (1994-1995). He has shown extensively in Europe, including as a featured artist at Sotheby’s New Bond Street in London, at the Henie Onstad Kunstsenter in Norway, and regularly at Galeri Haaken in Oslo. Today, Blom lives and works in Oslo.

Ocula Insight Kenneth Blom at Pékin Fine Arts, Hong Kong By Katie Fallen In a way it’s a real life story I’ve tried to talk about, but it’s not from [the] real. Mostly I don’t use models; I just use the idea.