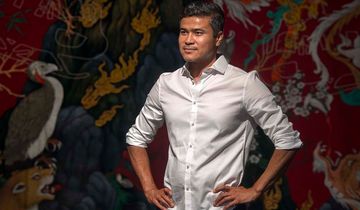 Khadim Ali was born in 1978 in Quetta, Pakistan, as an Afghan refugee. His family, belonging to the Hazara minority, fled Afghanistan to escape Taliban persecution. From 1998–99, he studied mural painting and calligraphy in Tehran, Iran. He earned a BFA at the National College of Arts, Lahore, Pakistan (2003), where he studied traditional miniature painting. He completed artist residencies in Japan through the Fukuoka Asian Art Museum (2006) and Arts Initiative Tokyo (2007). Ali moved to Sydney in 2010 and earned an MFA at the College of Fine Arts, University of New South Wales (2012).

Haunted by the March 2001 Taliban destruction of two monumental 6th-century Buddhas in Bamiyan, Afghanistan (the Ali family’s ancestral home, located 150 miles northwest of Kabul), the artist returned to the town in 2006 and conducted The Bamiyan drawing project as part of his participation in the 5th Asia Pacific Triennial, Brisbane, Australia (2006), for which he invited area children to depict local stories. Then, during his residency in Fukuoka later that year, he asked Japanese children to respond to the Afghan children’s images. The drawings became the basis of the series Absent Kitchen (2006– ). Ali returned to Bamiyan again in April 2008 and embarked on a collaboration with Lebanese-Canadian artist Jayce Salloum titled the heart that has no love/pain/generosity is not a heart (2008–11). This poetic documentary account of the ruins of the Bamiyan Buddhas and the valley’s current conditions takes the form of a layered installation of photographs, videos, documents, objects, and paintings.

In 2012, Ali presented five paintings at Documenta 13, including one at the quinquennial’s first presentation in Kabul. In addition, he conducted the seminar “Rereading Shahnameh” for children in Bamiyan. Shahnameh, or the Persian Book of kings, is an epic poem composed between 977 and 1010 by the court poet Firdausi. It records the mythical history of Persia preceding the 7th-century Islamic conquest. Ali continues to be inspired by childhood memories of his grandfather reciting from the Shahnameh, and acknowledges its miniature illustrations as his first exposure to art. He often chooses his subject matter from its secular pantheon of heroes and legends.

Ali has had solo exhibitions at Chawkandi Art Gallery, Karachi (2004 and 2005); Green Cardamom, London (2007); Rohtas 2, Lahore (2009); and Cross Art Projects, Sydney (2012). His works were featured along with Imran Qureshi’s in the Iran, Afghanistan, and Pakistan Pavilion at the 2009 Venice Biennale. Ali organized and participated in The Haunted Lotus: Contemporary Art from Kabul, Cross Art Projects (2010), and The Force of Forgetting, Lismore Regional Gallery, Australia (2011). His work was included in Future: Afghanistan, Gemak, The Hague, Netherlands (2008); Living Traditions, Queen’s Palace, Kabul (2008), and National Art Gallery, Islamabad, Pakistan (2009); Safavids Revisited, British Museum, London (2009); Only from the Heart Can You Touch the Sky, RMIT Gallery, Melbourne (2012); and Home Again—10 Artists Who Have Experienced Japan, Hara Museum of Contemporary Art, Tokyo (2012). Ali lives and works in Sydney, Quetta, and Kabu.

Khadim Ali discusses his latest body of work on view at Brisbane's Institute of Modern Arts, encompassing large-scale tapestries that reflect on the impacts of war and the normalisation of violence.

From her post as artistic director of The Factory Contemporary Arts Centre, Vietnam's first purpose-built space for contemporary art, to her co-curation of Sharjah Biennial 14 (7 March–10 June 2019), Zoe Butt discusses the challenges and rewards of her curatorial trajectory so far.

Art and culture are susceptible to the rampant global homogenisation that is occurring today, and we felt that there were ideas, philosophies, voices and opinions that needed to be discovered and explored.

Ali’s practice is largely influenced by his ancestry; rich in traditional and modern motifs—from both Eastern and Western art history.

Guerilla Kunsthalle & Saigon Surfer: An interview with Zoe Butt, director of Sán Art For most, Vietnam is an idea formed, since the beginning of the twentieth century, by a foreigner’s idea of the foreign, rather more than by its residents. Whether as French chattels, Russian foil or American paranoia, whether as stoic or inscrutable...

Artist Khadim Ali's powerful artworks are rooted in the many turbulent journeys he has negotiated. The 37-year-old artist belongs to Afghanistan's Hazara tribe, holds a Pakistan passport and now calls Australia home. His family was forced to flee from their home in Bamiyan during the civil war, which saw the Taleban take over...