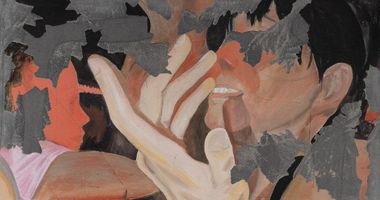 Latifa Echakhch was born in 1974 in El Khnansa, Morocco, and emigrated to France with her family when she was three years old. She attended the École supérieure d'Art de Grenoble, before graduating from the National School of Art Cergy-Pontoise and the Lyon National School of Fine Arts in 1999 and 2002 respectively.

Latifa Echakhch's first major installation was À chaque stencil une révolution (For Each Stencil a Revolution) (2007). It was featured as part of her first solo museum exhibition at Le Magasin, Grenoble, before travelling to the Hammer Museum, Los Angeles; Pinault Collection, Venice; and the Tate Modern, London. Referencing the 1960s cultural uprisings in Europe and America, the work takes its title from a quote by Palestinian leader Yasser Arafat regarding the French strikes of May 1968 and the anti-Vietnam protests in the United States.

The work itself alludes to the carbon paper and stencil machines used to reproduce leaflets distributed by protest groups, now rendered obsolete by photocopiers and other digital technologies. Echakhch lined the walls of the exhibition space with blue carbon paper, which she treated with a chemical solvent to make them bleed blue ink onto the floor. The installation simultaneously referenced the colour and gesture associated with leading post-war French artist Yves Klein, while acting as a monument to historical revolutions and a critique of contemporary revolutionary movements.

Much of Latifa Echakhch's practice examines issues of identity and history on a personal and collective level. After being awarded the Marcel Duchamp Prize in 2013, Echakhch presented the installation L'air du temps (2014) at the Centre Pompidou's Espace 315. The work uses her experience of her family's emigration to explore broader themes of migration, memory, and history. It presents a scene of low-hanging, cut-outs cloud forms, suspended from the ceiling and various objects immersed in black ink, including a suitcase, boxes of records left by her father in Morocco, and a perfume bottle filled with ink.

Visitors move around the set discovering the objects, which are embedded with both personal and historical associations. Enabling free movement between its components, the installation resembles a dreamscape, allowing viewers to traverse between the past, present, and future.

Echakhch continued to use ink to explore histories of migration and collective memory in the 2015 exhibition Screen Shot at Museum Haus Konstruktiv in Zurich. The main installation consisted of a labyrinth of canvas screens, on top of which the artist draped clothes soaked in India ink. At the entrance of the exhibition stood Les Géants (2015), several giant nude busts that reference the figures carried through town in parades or carnivals in Romantic folk traditions. Also included in the installation was La dépossession (2014), a fallen stage-set backdrop of a blue sky with clouds. Incorporating various states of abandonment, passage, and undress, Screen Shot alludes to the refugee crisis, and the high numbers of migrants who died while crossing the Mediterranean Sea.

Screen Shot was conceived as part of the Zurich Art Prize, which Echakhch was awarded in 2015.

Latifa Echakhch's works have been exhibited in major solo and group shows across the globe. In 2021, Echakhch accepted representation with Pace Gallery, and will present her first solo exhibition with the gallery at their London space in 2022. Echakhch will also represent Switzerland at the 59th Venice Biennale in 2022.

Echakhch's work is held in the collections of the Museum of Contemporary Art Chicago; Museu d'Art Contemporain, Barcelona; the Kunstmuseum Liechtenstein; and the Los Angeles County Museum of Art.

Her group exhibitions include The Location of Lines, Museum of Contemporary Art Chicago (2020); 'Your Footsteps are the Road, for There is No Road'—a tour amid the artists of the Marcel Duchamp Prize, Red Brick Art Museum, Beijing (2019); Practising Habits of the Day, Institute of Contemporary Arts Singapore (2016); Decorum, Musée d'Art modern de la Ville de Paris (2013–14); Expo1, MoMA PS1, New York (2013); It is What it is. Or is it?, Contemporary Arts Museum Houston (2012); Strange Comfort (Afforded by the Profession), Kunsthalle Basel (2010); and Studio Museum, Harlem, New York (2007).

Latifa Echakhch is based in the Swiss cities of Martigny and Vevey.

5 new artworks by Latifa Echakhch have recently been added to Ocula. Sign up to be among the first to know when new works become available.
Sign Up Login