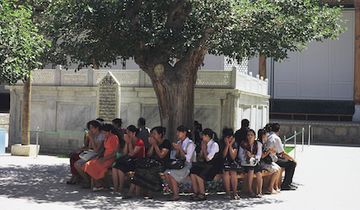 Slavs and Tatars is a collective of artists who identify “the area east of the former Berlin Wall and west of the Great Wall of China”—a vast landmass where Europe and Asia merge—as the focus of their work. First organized as a reading group in 2006, the group has lived and traveled in the region, which has been realigning itself since the collapse of Soviet Communism and has experienced escalating tensions between Eastern and Western identities—here, populations, allegiances, and languages are all in transition. In exploring the area’s expansive historical narratives and transnational relationships, Slavs and Tatars forgoes a strictly analytical stance for something more associative, intimate, and playful. Their projects stage unlikely combinations of mediums, cultural references, and modes of address; books and printed matter figure prominently in their work, as do contemplative, librarylike installations where visitors may consider their publications.

Slavs and Tatars In Ocula Magazine

The Lahore Biennale took place in sites built and used by the Mughals, the British, and the postcolonial Pakistan state.

Having held the dual role of co-directors of Brisbane’s Institute of Modern Art (IMA) for almost two years, Aileen Burns and Johan Lundh have shaken up the city’s contemporary art land

Slavs and Tatars In Related Press

A survey of more than 50 respondents from over 30 countries.

Slavs and Tatar’s mid-career survey subverts the idea of a speech act to its logical extremes through a studied visual lexicon.

From the 7th edition of Korea’s Busan Biennale to Japan’s new Triennial the Okayama Art Summit, these five international events will provide thoughtful reflection on new and refreshing curatorial practices in the context of the Biennale infrastructure.

Madam Liu, Director of Museum of Contemporary Art Yinchuan (MOCA Yinchuan), announced today that the museum will hold its first biennale. To be curated by internationally acclaimed artist, curator and co-founder of Kochi-Muziris Biennale, Bose Krishnamachari, the exhibition will be held from September 9 to December 18, 2016 on the premises of MOCA...