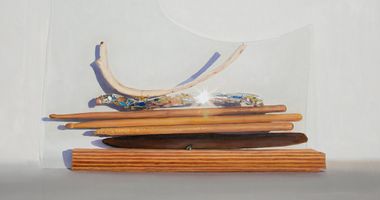 American artist Van Hanos' oil paintings are defined by their stylistic range. From Impressionism and photorealism to abstraction, with references to art historical and contemporary subjects, Hanos examines the possibilities of human experience.

Receiving a BFA from Maryland Institute College of Art, Baltimore (2001), and an MFA from the Columbia University School of the Arts in New York (2010), Van Hanos garnered critical attention for his participation at Art Basel in Miami Beach in 2014. In a 2014 interview with GQ, the artist explained that although the diverse styles of his practice might appear inconsistent, they match his interests: 'all I'm thinking about is my ideas, how to stay engaged, and how to keep things really fresh.'

Van Hanos' references to art historical canons demonstrate his extensive knowledge of the field. The Good Samaritan (2015)—painted after French painter Aimé Morot's 1880 work of the same title—shows a man supporting a limp body that sits on a donkey. The seemingly unconscious man is left partially unfinished, the artist's preparatory lines visible through paint, although his weight appears to be just as tangible as in the original painting.

The vast range of Van Hanos' techniques can be seen in Late American Paintings: his solo exhibition at Château Shatto, Los Angeles (2017). Popular Western cartoon characters, each rendered in their original styles, entirely cover the canvas of Prototypes for White Children (2017), while figures including Godzilla in a Trump mask and former president of the United States Barack Obama surround a poker table in A Recent History of the United States of America (2017).

Ranges of purple and blue, among other colours, dominated the paintings exhibited in Interiors, another solo exhibition at Château Shatto (2020), which explored the perception of interior psychological space. The painting Interior (2020) depicts a windowed room where a sharp stripe of light emerges from the wall; in the abstract Pregnant Painting (2020), oil paint has spread across the white canvas, drying with effects reminiscent of watercolour.

Van Hanos lives and works in New York and Marfa.

Be among the first to know when new artworks and exhibitions by Van Hanos are added to Ocula.
Sign UpLogin