Recognised as a pioneer of conceptual painting in China, Wang Guangle interrogates the luminosity of light and layers of time in his contemplative oil paintings.

Born in 1976 in Fujian, Chinese artist Wang Guangle studied painting at Beijing's Central Academy of Fine Arts (CAFA). 3pm to 5pm, his graduating exhibition in 2000, featured five paintings in which beams of sunlight fall across the artist's studio floor. Because of their apparent simplicity in composition, Wang's works were initially dismissed as being too abstract. However, he was awarded the Director's Prize upon graduation.

In the early 2000s, Wang's paintings started to shift from depictions of sunlight to a more focused consideration of the terrazzo floor pattern popular in China, which he first incorporated into his '3pm to 5pm' paintings. The 'Terrazzo' series, begun in 2002, marks his turn to conceptual painting, emphasising both time and process by meticulously portraying the tiny stones that comprise terrazzo.

Wang also contributed to the emergence of conceptual painting in China by co-founding the artist group N12 with fellow graduates of CAFA, among them Ma Yanhong, Qiu Xiaofei, and Shen Liang, in 2003. Rejecting the Social Realist aesthetic encouraged by the Academy, the young Chinese artists aspired to diversify approaches to painting.

For his ongoing 'Coffin Paint' series, initiated in 2004, Wang Guangle horizontally paints layers of differently coloured paint to suggest the passage of time. The paintings are inspired by a tradition in his home province of Fujian, where elderly people repaint their coffins every year—a ritual that has come to be associated with longevity. Wang's canvases range from distinctive layers of saturated colour (9 Tins of Acrylic Paints, 2004) to pastels (Coffin Paint 111027) to monochromatic shades of grey (Coffin Paint 110706) (both 2011).

Building on the sunlight of his earlier paintings, Wang Guangle has also depicted light in his often vertically oriented, monochromatic paintings. In works such as acrylic on canvas 150527 (2015), yellow starts out the darkest in the centre and slowly fades away, becoming white around the edges. Painted with careful brushstrokes, the paintings appear to radiate light while creating a palpable sense of depth. The works presented in Duo Color, Wang's solo exhibition at Pace Gallery, New York in 2019, employ two colours that gradually merge into another in the centre of each painting. 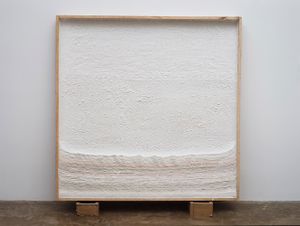 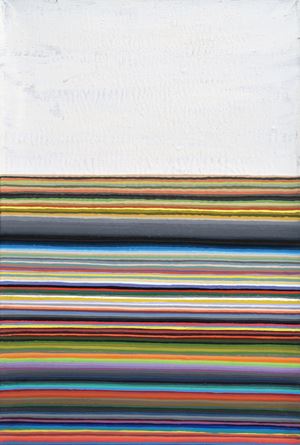 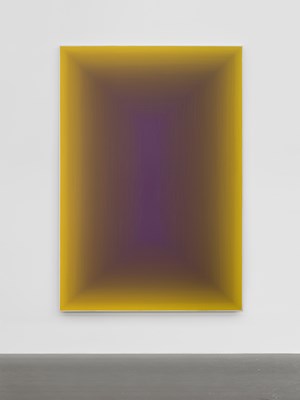 Be among the first to know when new artworks and exhibitions by Wang Guangle are added to Ocula.
Sign UpLogin