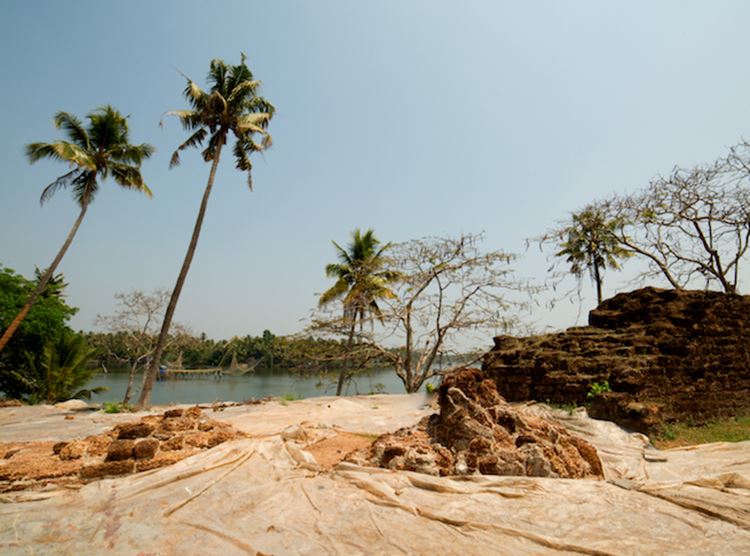 Kochi, also known as Cochin, has a complex history due to its position as an important trading port for spices in India, with historical documentation suggesting trade between Arab, Asian and European territories since ancient times, and colonisation by the Portuguese, Dutch and British from the 15th century. This historical context has had an ongoing influence on Kochi's multicultural population, not to mention the Kochi-Muziris Biennale, launched in 2012 to reflect a core aim of the Kochi Biennale Foundation, which is to 'explore several centuries of cosmopolitanism associated with the port city of Kochi'. 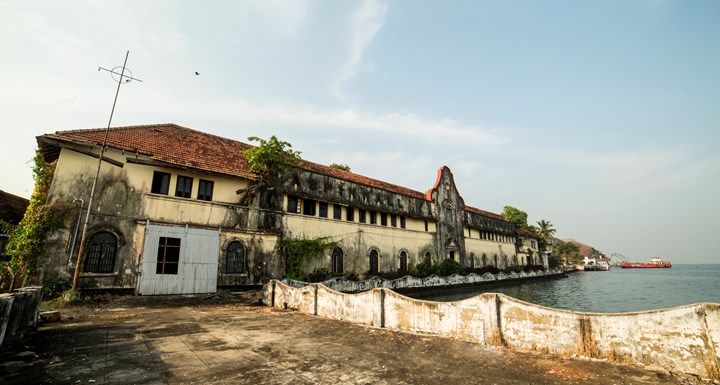 Architecture is a vivid indicator of Kochi's diverse history, and for the 3rd Kochi-Muziris Biennale (KMB), Forming in the Pupil of an Eye (12 December 2016—29 March 2017), the appointed curator, Mumbai-based artist Sudarshan Shetty gave particular consideration to the Biennale's chosen venues and their historical lineages. Ninety-seven artists from 31 countries are presented across KMB sites, including familiar venues such as the waterfront Aspinwall House estate and the former colonial trading warehouse Pepper House, alongside other more far-flung venues such as the historical Portuguese-built Kottapuram Fort, which has been used as a KMB exhibition site for the first time. 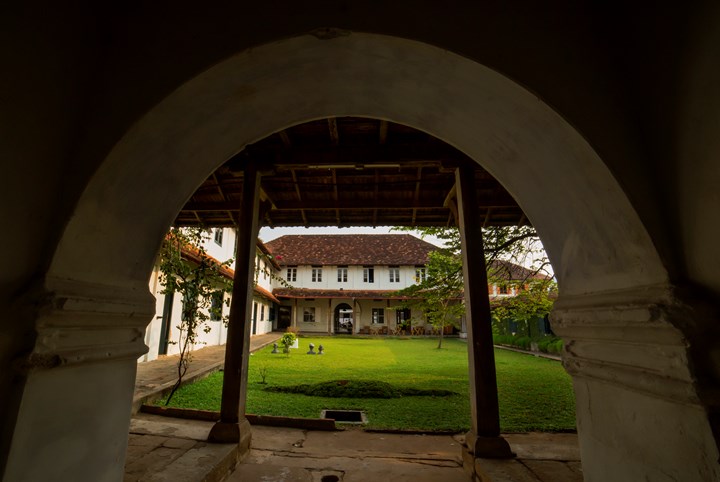 In his curatorial text, Shetty evokes a story that is loosely derived from the Rigveda, an ancient collection of Vedic Sanskrit hymns. The Rigveda is one of the four canonical sacred texts of Hinduism known as the Vedas, and dates back to roughly between 1500 and 1200 BC. In Shetty's interpretation of this text, he focuses on a travelling boy who visits a sage. In this story, the boy is drawn to the sage through the power of her eyes and her ability to see multiple perspectives. Indeed, through their interaction, the boy is enlightened and can now see the world around him differently. Critically, rather than focus on the differences between the boy and the sage, Shetty draws our attention to the potentiality of their exchange, emphasising the role of the eyes in relation to the story, and their anatomical ability to both see and reflect an image simultaneously, thus referencing this Biennale's title.

Utilising this classical Hindu text as a starting point, Shetty poetically conveys his curatorial position on the Biennale theme: tradition. Taking this theme into account, the story Shetty uses to elaborate on the Biennale's conceptual framework offers an analogy to assist audience members in engaging with a process of enlightenment through the act of exchange within the Biennale space. In other words, Shetty wants us to shed our skin and to see the world a-new by opening ourselves up to notions that may differ from our own, and engaging with multiple perspectives. Shetty's invocation of traditions is to speak of the multiplicities that the field of contemporary art generates rather than to mimic the traditional in the field of art itself. Water plays an important role within Shetty's theme, given its two-fold relationship with tradition, firstly through its connection to Kochi, a port city whose history is dependent on—and characterised by—its position on the Arabian sea, and its proximity to the Indian Ocean. At the same time, the notion of water and its reflection draws us back to the title of the exhibition Forming into the Pupil of an Eye, where one's own eye becomes the key to self-enlightenment and the opening of barriers. Thus, the exhibition comes across as a process of collective reflection, with references to oceans, seas, lakes, and large bodies of water standing out as reoccurring motifs. In Aspinwall House, for instance, New Delhi-based artist and environmentalist Ravi Agarwal presents Sangam Dialogue (2016), a work that continues the artist's ongoing interest in environmental concerns, and the space between art and activism. The work is comprised of a large video installation on one side of the space, in which we see a fish trawler at sea, and a small wooden hut on the other, from which a small viewfinder hole offers a view of the coast directly outside the Aspinwall building. These references to the sea are fitting, given Kochi's location on the coast. Oslo-based Camille Norment plays on this position through her work Prime (2016), which builds on the artist's interest in psychoacoustics and the way sound can become a reflection of an environment. Viewers sit in a room looking out to the sea; the space is empty save for five benches. Accompanying this view of the water is a sound landscape created by the interweaving of chanting vocals produced by the artist. Chilean poet Raúl Zurita uses water in a more dramatic fashion, by drawing reference to the Syrian refugee plight through The Sea of Pain (2016), in which audiences wade through a knee-deep shallow pool of water stretching approximately 20 metres in a warehouse space in Aspinwall House. Excerpts from the artist's poetry are displayed at various intervals on the wall, including the line 'Don't you feel me?', which makes reference to Alan Kurdi, the three-year-old Syrian boy whose posthumous photograph circled the world after his body washed up on the Turkish shore. Inviting empathy with regards to some of the world's worst crises, the installation attempts to break down the divide between those who have access to basic privileges and those who do not, using the language of emotion rather logic. 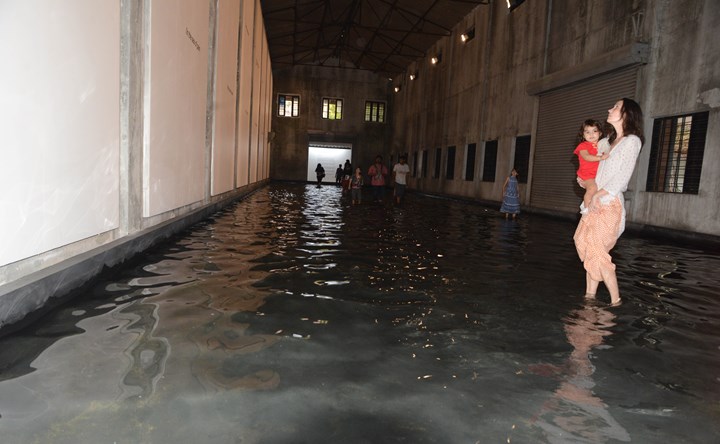 Accessibility has always been a key focus for the Kochi-Muziris Biennale, and this year, various collateral projects and events have been staged beyond the main thematic exhibition. These include: the Students' Biennale, History Now Conversations, ABC Art By Children, Artists' Cinema, Music of Muziris, among others. These programmes take the form of targeted parallel events, each fostering a specific audience, and assisting in KMB's community affiliation and founding principle as 'A biennale for the people by the people'. This is achieved by the Foundation's significant investment into publicity via social media platforms and video-based PR, in addition to free attendance to the Biennale offered every Monday.

Enabling another level of accessibility is a mobile-lecture performance by Bangalore-based artist Abhishek Hazra, who offers a guided tour of the Biennale as part of its official programme. Though not always truthful, Hazra plays on his position as an artist, providing so called 'behind the scenes' tongue-in-cheek insights into the Biennale. Creating a sense of movement and activation within the exhibition, his white lies include telling audiences that a work is missing from the Biennale, even if it is not the case. Such insights add a self-reflexive layer to the exhibition while alluding to the role of hearsay in the contemporary art world. The performance adds a subversive tone to the staging of the Biennale in that the structure is undermined by the artist's own narrative. 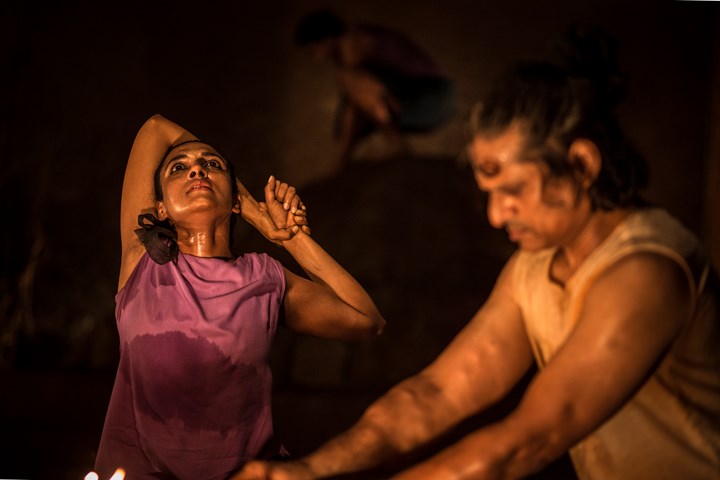 Likewise, New Delhi and Mumbai-based theatre-maker Anamika Haksar engages with the history of water in Kochi and the terms of its accessibility in a work that considers the theme of the Biennale indirectly. Her large installation, Composition on Water (2016), features a theatre set comprised of a large dirt-covered ground, Buddha sculptures, tombs and running water. Made to look like a play on a mythical or ancient site in India, six actors in basic clothing slowly move around the space during performances, engaging with different elements as spectators watch on from the sidelines. The work draws reference to Indian poet and writer Namdeo Dhasal: a co-founder of the Dalit Panthers, a 1970s and 1980s anti-caste organisation inspired by the Black Panther movement in America. As a writer and activist, he was known to challenge dominant elitist discourses promoted by religion, tradition and philosophy, focusing often on caste-based struggles. Haksar's installation, an homage to Dhasal, presents an activated, lively and nuanced platform to encourage further inquiry into his writings, while at the same time highlighting the ongoing conversation of caste in India and questioning which voices are privileged in religious ideologies. 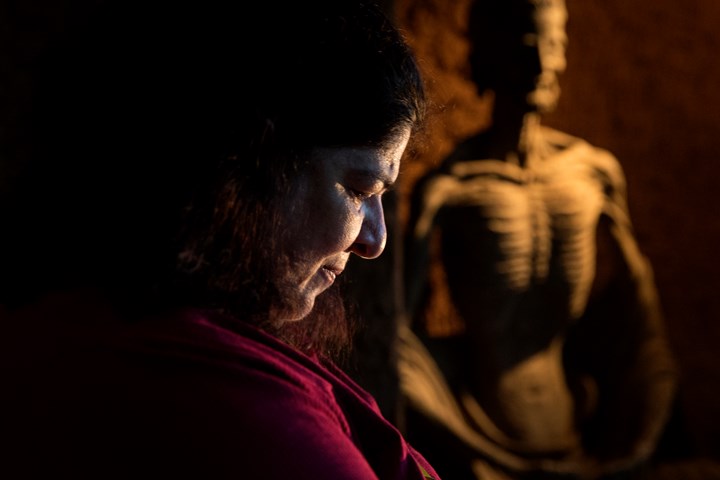 This conversation applies directly to the theme of this Biennale, for which Shetty speaks repeatedly about the importance of a multiplicity of voices in relation to the theme of tradition and Kochi as a contextual space. However, the lack of curatorial articulation and focus made this a difficult exhibition to read; and viewers were left to draw disparate connections between works. Curatorially, it would have been more engaging to break down various notions of traditions into sub-sections, in this way we could have collectively dug deeper into the role of tradition within contemporary societies. It could also be argued that in order to truly engage with multiple perspectives, the curator's own position on the topic should be made clear so that it could be understood.

This level of understanding is further made a necessity in this exhibition due to the sheer political nature of tradition—a thorny topic because 'tradition' comes with historical baggage that doesn't always reflect multiple perspectives. Oppressive forms of tradition have systematically created forms of discrimination in which some are privileged over others, including women, people from lower castes, and minority groups. In many ways, the state of Kerala (although maintaining and being proud of many strong forms of cultural traditions) has also challenged many traditional or politically conservative values. Kerala now boasts the highest literacy rates in India, large labour union groups, and strong female participation in the workforce, all of which have contributed to its status as the most progressive Indian state. 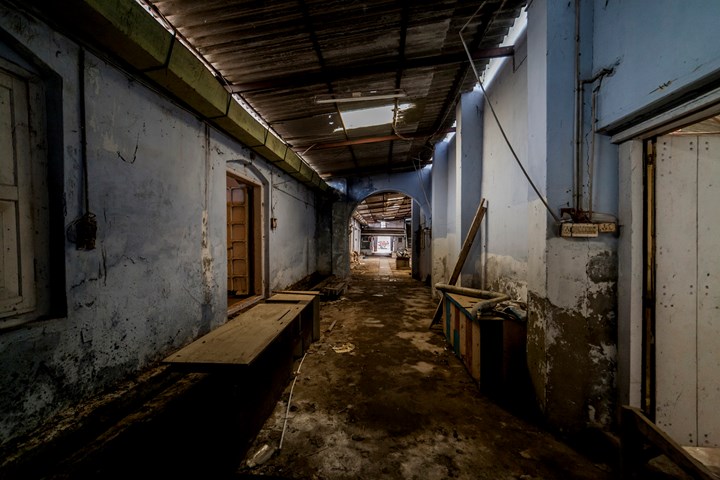 Thus, using tradition as a methodology to examine an international biennale on contemporary art is problematic. First due do the inability to use the lineage of one tradition to speak for peoples from many traditions, and secondly due to the progressive local context of Kochi. A case in point is the Hindu text on which this curatorial is based, whose history points to issues of caste-based division and also singles out one of many religions that exist within Kochi itself. 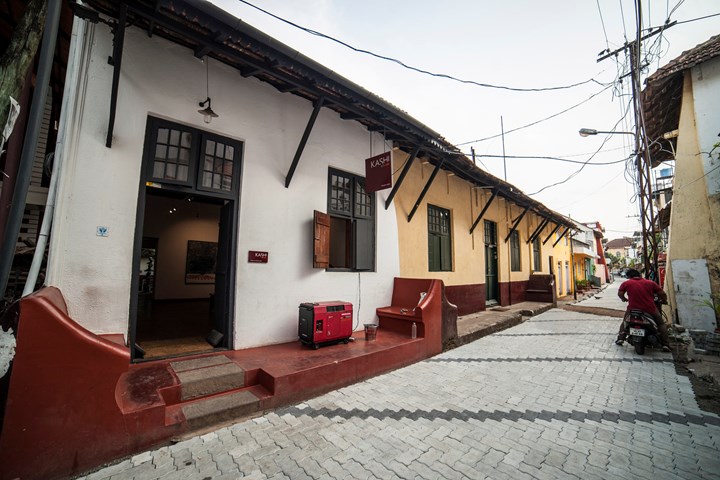 Finally, as a post-note, the KMB Biennale Foundation itself does not go without its criticisms. For future iterations, it would be beneficial to see the foundation draw reference to Shetty's hopes of multiple voices within the Foundation itself. There has been rising pressure on the Foundation's organisers to diversify their appointment of future curators, since, as of now, all appointed curators have been men who have emerged from the Mumbai scene. Two things would be refreshing: to see women artist-curators appointed, and to see artist-curators hailing from other Indian locations. India is a large and diverse country; it would be worthwhile for the Kochi-Muziris Biennale to open up to these perspectives through future curatorial appointments, and in this way, truly diversify and offer a multiplicity of voices for future audiences. —[O]