In Meiro Koizumi's three-channel video installation, The Angels of Testimony (2019), the central frame features an interview with Hajime Kondo about his time as a solider of the Imperial Japanese Army during the Second Sino-Japanese War. The conversation centres on war crimes perpetrated in China, including the beheading of Chinese prisoners for training purposes. Nearly a century old, Kondo can barely speak; indeed, he can hardly remember the atrocities he committed. But as his memories return, remorseful tears replace stuttering speech. Bordering these scenes, a chorus of Japanese youths repeat Kondo's testimonies, both in a studio space and on the indifferent streets of Tokyo.

The Angels of Testimony is a work of harrowing complexity and clarity; it offers space for both sides of a horrific history—and the generations that have inherited its memory and erasure—to mourn a past that can never be taken back, fully forgiven, nor truly remembered. It is one of the standout contributions to Sharjah Biennial 14 (SB14) (7 March–10 June 2019), whose title, Leaving the Echo Chamber, reflects this exhibition's intentions to render 'History' as we know it—and thus, the world that has been constructed from its sanctioned narratives—as the chamber from which to depart.

With over 80 artists and some 60 new commissions, SB14 consists of three exhibitions each curated by a single curator—Zoe Butt, Omar Kholeif, and Claire Tancons—mainly presented across the galleries comprising Sharjah Art Foundation's central complex in the heart of Sharjah: a mix of new galleries and restored heritage spaces. Koizumi's film is shown in a dark gallery at Dar Al Nadwa in Calligraphy Square. The work forms part of Butt's presentation, Journey Beyond the Arrow, which makes history's record multifaceted, be it through Qiu Zhijie's display of map paintings that draw historical and cultural links between places and peoples, or Anawana Haloba's mixed-media rumination on Chinese neocolonialism in Zambia, A Dragon King in Sleepy Pride Rock (2019), which draws on the Cold War relations between Africa and China as a historical backdrop.

In Tuan Andrew Nguyen's four-channel video installation The Specter of Ancestors Becoming (2019), shown in the open stone shell of Bait Gholoum Ibrahim, dramatised encounters play out on screen. These have been imagined by the descendants of Senegalese soldiers who fought with the French army during the Anti-French Resistance War in Vietnam, and brought wives and bi-racial children home with them. In one dialogue, a son confronts his father about a mother who was left in Vietnam and was never spoken of. War leads to difficult choices, the father explains. His son responds by describing forgetting as a choice—one that was made without his knowledge or consent.

A sense of intimate betrayal runs through Journey Beyond the Arrow, which complicates narratives that have been presented as complete and formal facts, but are actually a set of incomplete testaments. At the Sharjah Art Museum, Khadim Ali's I for Infidel, J for Jihad (2019), produced in collaboration with Mohammed Hadi Rahnaward and Aziz Hazara, explores the Islamic propaganda that continues to shape educational curricula in Afghanistan. The wall text for one schoolbook on display for Pashto language and maths speculates that it was printed in Nebraska, U.S.A. It includes sentences like 'Holy War is mandatory' and 'Muslim people of Afghanistan are holy warriors'.

Similarly, Enrique de Malacca Memorial Project (2016–ongoing), Ahmad Fuad Osman's museological display of historical artefacts and paintings in one gallery at the Sharjah Calligraphy Museum, explores the story of a slave of Portuguese explorer Ferdinand Magellan, and the possibility that it was Enrique, not Magellan, who was the first person to circumnavigate the globe. While this fact might never be confirmed, its illumination raises the spectres of other omissions that exist in official accounts of the past and present.

At the Bait Al Serkal building, once the 19th century home of the commissioner of the Arabian Gulf, Kemang Wa Lehulere's video, The Bird Lady in Nine Layers of Time (2015), documents the excavation of murals that once covered the home of Gladys Mgudlandlu, the first black woman artist to regularly exhibit her work under apartheid, under layers of paint and plaster. The film is shown alongside Mgudlandlu's bright landscape paintings, which are hung next to chalk-on-blackboard recollections of Mgudlandlu's work created by Lehulere's aunt.

Also installed in Bait Al Serkal as part of Making New Time is Lawrence Abu Hamdan's head-spinning series of slideshow image projections and single-channel video installation, Once Removed (2019). Memories of the Lebanese Civil War come alive through photographs and artefacts compiled by young Druze historian, Bassel Abi Chahine, who believes he was a soldier during the war in a past life. Reincarnation is a core Druze belief, and this enabled Chahine to engage with veterans of the conflict because they see him as a fallen comrade. In the film, Abu Hamdan interviews Chahine; they stand in what looks like a dark video installation, with multiple projections of Chahine's images blanketing their silhouettes.

Once Removed is emblematic of Leaving the Echo Chamber's overall premise: to challenge the construction of collective memory by opening up its production to less conventional—but equally viable—forms, forces, and beliefs. This fluid approach to time and its recollection is also encapsulated in Phan Thao Nguyen's stunning mixed-media installation, Mute Grain (2019), commissioned as part of Journey Beyond the Arrow, which includes a three-channel black-and-white video with a painful lullaby of a piano score shown in its own room. Myth, reality, and personal recollection come together in a devastating account of the 1945 famine in the north of Vietnam, in which the two 'poorest months of the lunar calendar'—March and August—are embodied by adolescents separated by death.

Similarly, Wu Tsang's magic realist video installation of two overlapping projections, One emerging from a point of view (2019), portrays the Mediterranean migrant crisis from the vantage point of Skala Sikaminias, a village on the island of Lesvos whose inhabitants are mostly descended from Greek refugees displaced from Asia Minor as a result of the great population exchange between Greece and Turkey in 1923. The narrative is a layering of accounts: villagers' descriptions, a semi-mythological story of a Berber witch (Yassmine, a refugee who has landed in a camp on Lesvos), and excerpts from a 1955 book by Lesvos-born writer Stratis Myrivilis, The Mermaid Madonna, about an Anatolian orphan (as narrated by photojournalist Eirini Vourloumis).

Across all three shows, the sea reappears as a site that harbours so many of the memories and myths that each work in this biennial records. Tsang's film forms part of Tancons' exhibition, Look for Me All Around You, as does Land of Zanj (2019), a powerful performance that was staged at and around the site of the Kalba Ice Factory by Mohau Modisakeng during the opening week. Roughly 20 performers dressed in black costume dramatised migration between the Arabian Gulf and the Swahili Coast, engaging directly with the context of this particular venue, poised on the edge of the Gulf of Oman, which leads to the Arabian Sea and the Indian Ocean. The objects that were used for the performance remain in situ at the Ice Factory, and aspects of it will be reactivated throughout the biennial's run.

Look for Me All Around You is named after the words of pan-African leader and activist Marcus Mosiah Garvey Jr, and paints broad relational strokes between geographies and temporalities. Caline Aoun's Time Travel (2019) shows blurry live-stream images of Lebanon created from four projectors spinning at 375 frames a minute in Gallery 1 in Al Mureijah Square. Mohamed Bourouissa's installation Blida-Joinville (2018–2019) renders the floor plan of Frantz Fanon Psychiatric Hospital in Blida, Algeria, where Fanon practiced, into three-dimensional white frames on the grounds of a former kindergarten in Kalba.

The walls of the abandoned space are covered in paintings of plants, created during workshops the artist conducted with students at the site. The project is an extension of the community garden Bourouissa created for the recent Liverpool Biennial, the production of which is documented in the film, The Whispering of Ghosts (2018), screened in one space, with the sound projected into other parts of the kindergarten complex.

Blida-Joinville is one of the many works in Tancons' show that upholds the Sharjah Biennial's tradition of anchoring each edition to its context. The staging of the Filipino Superwoman Band by Eisa Jocson during the opening week, by far a highlight, is another example: a trio of performers who brought to life the lyrics of Karyn White's 1989 R&B power ballad 'Superwoman', about the frustration of an unappreciated housewife, which was apparently popular in 1990s Manila. Three versions of the lyrics are stencilled onto a window of Gallery 2 along with headsets to listen to performances of each, and a microphone connected with speakers positioned around the courtyard outside. Words have been redacted to encapsulate the title of each song: 'Lover', 'Libertine', and 'Labourer (O[verseas] F[oreign] W[orker])'. The opening lines for the latter read: 'early ... morning ... breakfast ... table /... make ... coffee ... sugar ... cream /... eggs ... easy .... toast done.'

Such redactions reflect the curatorial premise of Tancons' show, which, as she writes, 'revels in displaced artefacts, coded languages, sonic disturbances, transient presences, light flashes and shadow imprints'. The opening week programme of performances and activations, for example, was filled with stops, starts, and things best left unsaid.

Formally, Tancons' appreciation for unpredictability and opacity comes through in Caecilia Tripp's Even the Stars Look Lonesome (2019), a five-screen film installation arranged in the shape of a pentagon, shown in one room at the Kalba Ice Factory. Tripp's script is a cosmology of the world narrated by single voice and its whispering chorus, while screens show the cosmos, the elegant movements of the suited choreographer David Hamilton Thomson, and former World Boxing Organisation champion Michael Olajide Jr dressed in Hermes-inflected gold and silver kit. 'Nothing is true; everything is alive; everything is in relation', is one of the lines that are read out; after each statement, the sound of a rattle shaking in space punctuates the words being spoken.

At the centre of the installation is ASTEROID (2019), a copper seat marked by smooth black 'cracks' that move outwards from a central point to divide the object into three, like a diagram of SB14's three exhibitions meeting in their division. Tripp likens the installation to an asteroid that crashed into the site to crystalise fluidity into fixed form, which is one way of describing Leaving the Echo Chamber as a whole: an invitation to readjust and expand ways of looking at, and negotiating, world time and space. —[O] 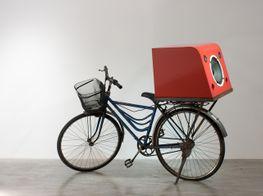 Tuan Andrew Nguyen was born in 1976 in Saigon, Vietnam. In 1979, he and his family emigrated as refugees to the United States, and he grew up in California. Nguyen earned a BFA from the University of California, Irvine (1999) and an MFA from the 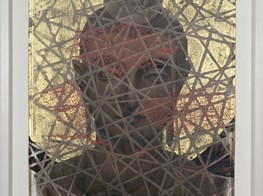 Khadim Ali was born in 1978 in Quetta, Pakistan, as an Afghan refugee. His family, belonging to the Hazara minority, fled Afghanistan to escape Taliban persecution. From 1998–99, he studied mural painting and calligraphy in Tehran, Iran. He 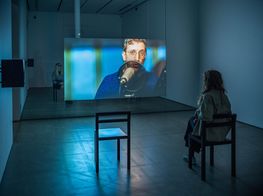 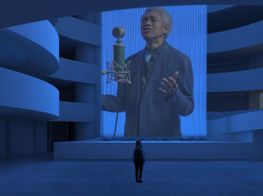 Wu Tsang is an artist, performer and filmmaker. Her films, performances, and installations have been presented at museums and film festivals internationally. Tsang's first feature  WILDNESS  (2012) premiered at MoMA's Documentary Fortnight 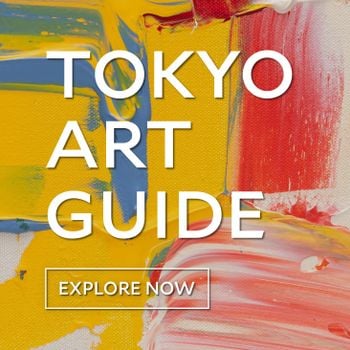