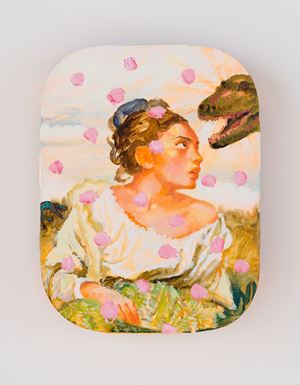 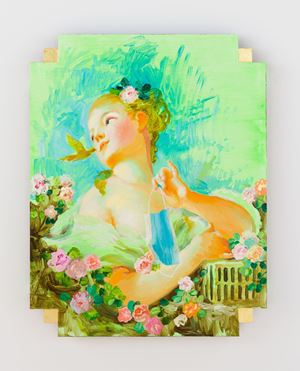 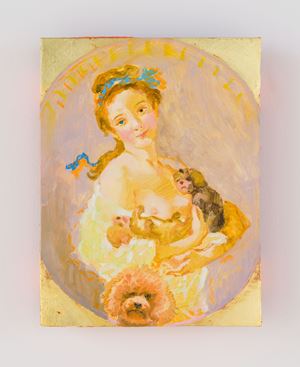 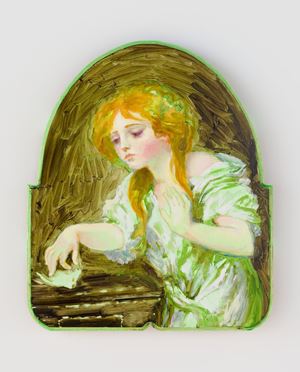 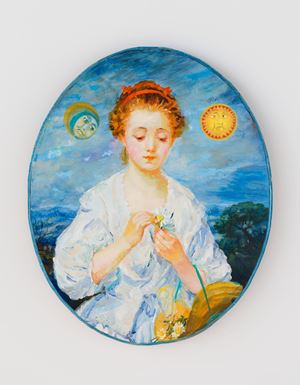 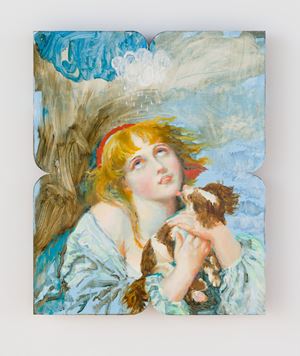 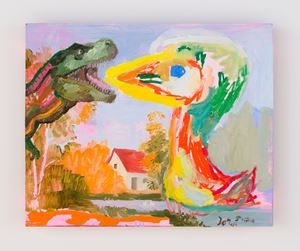 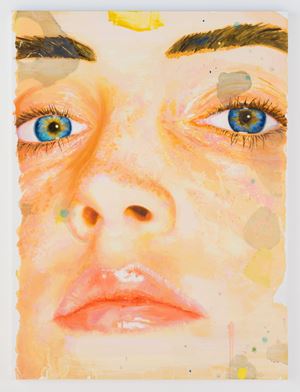 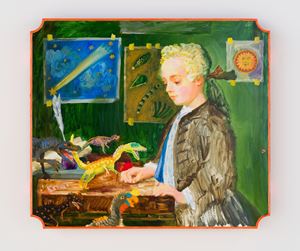 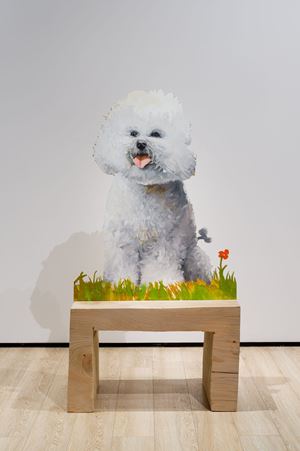 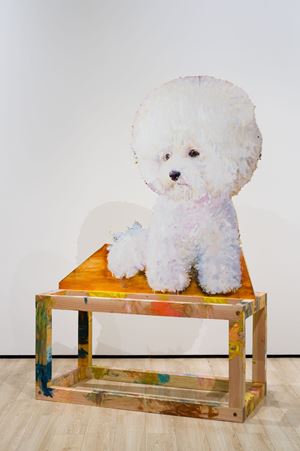 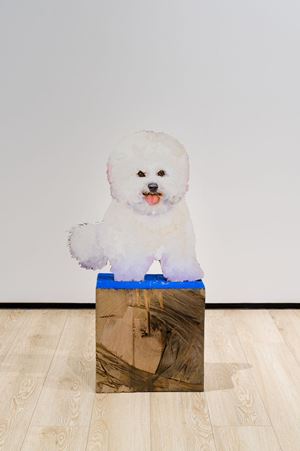 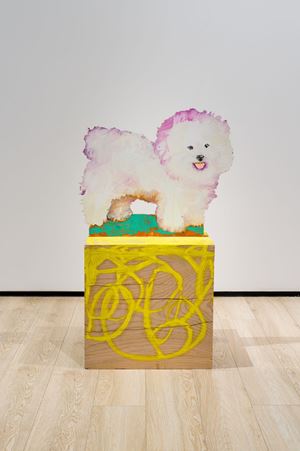 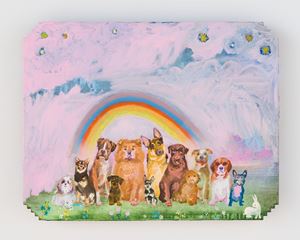 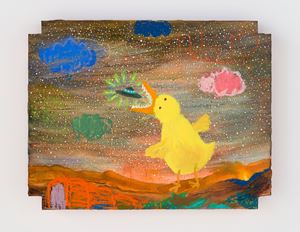 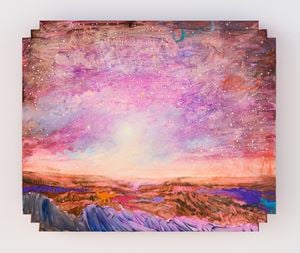 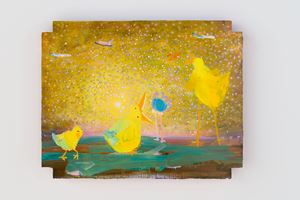 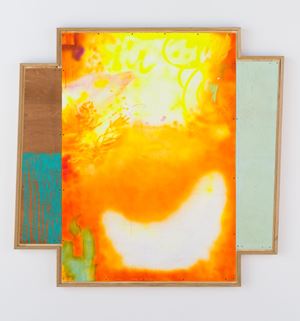 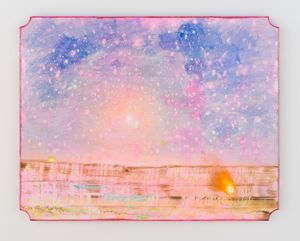 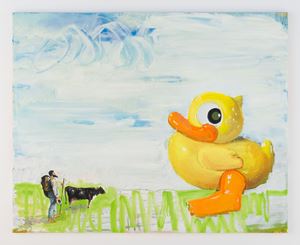 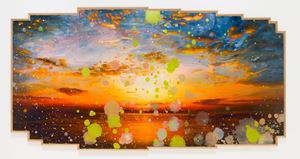 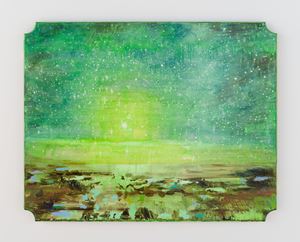 Almine Rech Shanghai is pleased to present the fifth solo exhibition of Tursic & Mille with the gallery. The exhibition will be on view from January 15 to March 06, 2021.

Experiencing Tursic & Mille's art is like swimming in a swamp of images. There is no hierarchy between the two; both of them call the shots, and the various elements in the pictures are results of conversations and mutual resistance. But there are more voices and exchanges than just their own. They also incorporate others' visual languages: many of the paintings and sculptural works appropriate existing images (it was reported in Artforum that the duo has a collection of more than 140,000 images); besides using images found online, they also cut out pages from magazines, and allow these to collect paint and dust in the studio, effectively producing new traces and destroying the images. In turn and before long, the images cease to exist as fast moving consumer goods, and just as quickly become objects as such, living an afterlife, going in parallel with Tursic & Mille's artistic practice that, based upon existing images, marks, unmarks and remarks traces in a language that is similar to Polke's, Richter's and Ruscha's. As images come and go, consumed by viewers' attention, capital and (religious, art history, scientific and cinematic) sign systems, whether the indigestible, the non consumable remains? Bruno Latour talks about the act of and motivation for Iconoclasm as destruction itself, but it is not as certain whether, on the other hand, Iconoclash is constructive or destructive. Just as uncertain and suspended is the creation of image. Defilement of sacred icons is a human act that sabotages the sacredness of icons, but in Iconoclash, defacing a face entails the birth of a new one.

In a conversation with critic Bernard Marcadé, Tursic & Mille talk about the painter's belatedness. They often appropriate existing images, hence the artwork titles of 'After...' Anachronism is also a prominent feature: 18th century paintings, Hollywood celebrities, anonymous scenes could be present at the same time—their Google-like, hyperlinked constellations of images are Pantheons, or mass graves. Remarkable figures, works and scenes from art, film, pop music and other cultural realms make frequent appearances here: classic Picasso in stripes, Oscar Wilde supporting his face with one hand, William Burroughs from the Beat Generation with a gun, Courbet with a brush, Benjamin looking confused, Nietzsche disrobed... Deemed worthy are not only high culture figures: also appearing are deceased Kurt Cobain with his wife Courtney Love by the sea with flowers, homey Lindsay Lohan making pasta, and Bettie Page in her classic pin-up pose... animals, rubber ducks, masks and other nameless trivial objects are also present.

Tursic & Mille are not interested in faithfully reproducing the existing images, but to treat them as blank pages, tabulae rasae, just like canvases. They appropriate iconic historical pieces by Jean-Baptiste Greuze, Jean Honoré Fragonard and Eugène Delacroix among others. The figure in Jeune Orpheline au T-Rex (d'après Eugène Delacroix, ca 1824, 2020) is evidently inspired by Delacroix's Orphan Girl at the Cemetery (the title says it all: apparently the artists are not interested in rendering it an art world insiders' intellectual puzzle): the Californian sunset lights up the whole picture, which is in turn contaminated by clustered pink dots, effectively interfering with the perspective of the original artwork, photobombed by a T-Rex. Encounter (after Asger Jorn, 1959, 2020) incorporates CoBrA artist Asger Jorn's Disquieting Duck. The original painting is torn between the idyllic and the semi-abstract, iridescent duck, radically intensified on both visual and spatial dimensions. Tursic & Mille's bright palette and scientific-illustration-style T-Rex only furthers the sensational effect. Chardin's Boy with a Spinning-Top (ca. 1735), on the other hand, becomes after Tursic & Mille's treatment boy with dinosaurs. The dark, earthy background of the original artwork is in sharp contrast with the gentle light that crystallises the boy's focused expression, portraying the society's emphasis on children's well-being and joy after the Enlightenment. Tursic & Mille keep the 18th Century attire, and simply replace the spinning-top with small dinosaur figures. The renaissance of the dinosaur subject in the science world in the 1960s (debating, among other issues, whether dinosaurs are slothful and cold-blooded or active and warm-blooded animals) brought the ancient creatures back to the realm of popular culture, and largely improved the visual representation of the dinosaurs, further solidifying the fascinating creature's popular symbol status. The history of visual representation of dogs, on the other hand, is even more profound than that of the dinosaurs; Tursic & Mille incorporate a number of dogs in their artworks too, especially the breed of Bichon. Canine has been domesticated for some ten thousand years and is an animal and a pet that serves in huntings, symbolises power and functions as a being that projects human emotions. Tursic & Mille works upon Fragonard's A Woman with a Dog (1770): the puppy lying on the woman's naked bosom narrates the intimate relationship between human beings and dogs in culture.

For Tursic & Mille's oeuvre, landscape is also an imported theme. A number of their landscape works refer to real, historical places, such as the Mont Sainte-Victoire, as framed by Cézanne's studio window. Whatever their landscape subject may be, however, the final artworks are too good and delicate to be true. Silk print realistic silver landscapes are covered with abstract colour patches of varied sizes; or, abstractly constructed fantastic geographies, found in which are eerie hues, aurora, stars and constellations, pink mountain rocks, tender clouds, UFOs and cartoon ducks. Tursic & Mille's series of paintings thatdepict fire and flames as its central motif was started in 2010, first exhibited at The Centre Pompidou. Painting with a Smile (2020) is an example par excellence of the duo's two-and-a-half dimension artworks, half-painting and half-sculpture: a number of overlapping, crisscrossing paintings, the top of which is filled fully with flame-like yellow and orange. One also finds there a lighter colour patch resembling a grinning emoji. This work is inspired by Tarkovsky's last film The Sacrifice. Fire symbolises not only destruction, but also a spectacle, and is capable of forming new spatialities. The enlarged, outreaching visage in The Face (2014–2020/ ongoing) seems familiar, but the scale of the artwork makes the face with long eyebrows and a luscious mouth unrecognisable.

What is the Hayflick limit of image? Benjamin speaks of photography's mechanical reproduction's consumption of the aura; today, the original and the copy, the virtual and the reality are merely two sides of a coin. The image itself is reality and is proliferating in a cancerous fashion. And yet, they remain as powerful as they once were. People consume images (including those of our owns) on a daily basis; in the implosion of images, if eating is indeed, as Derrida puts it, a process of assimilation, then whither the inconsumable, the indigestible, when they could not be simply incorporated into existing sign and perception systems? Tursic & Mille do not mean to give an answer here, but they have demonstrated ways in which the remains could be ruminated and have emphasised the indissoluble materiality of image objects.

Sign up to be among the first to know when new exhibitions by Tursic & Mille or at Almine Rech open.
Sign Up