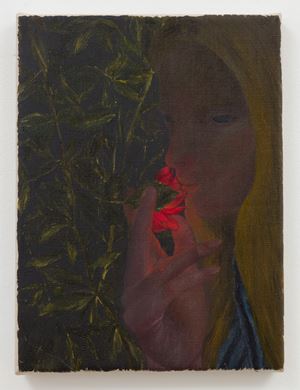 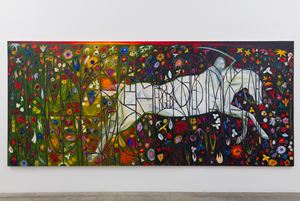 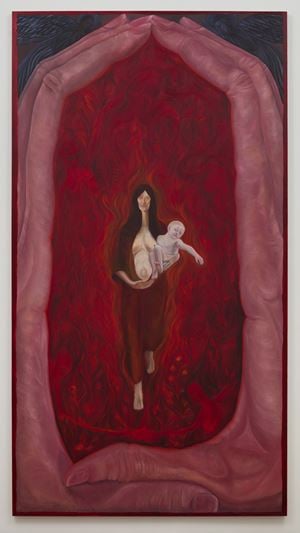 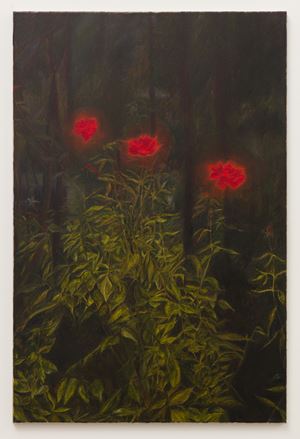 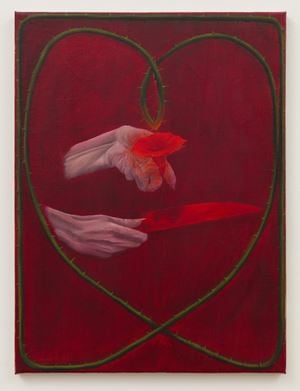 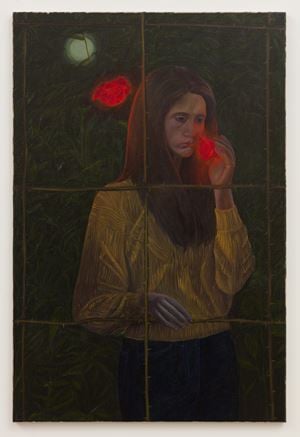 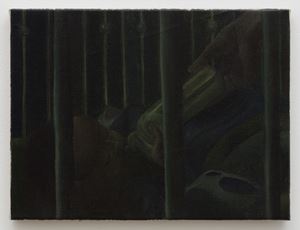 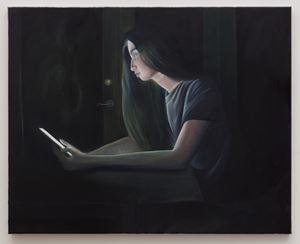 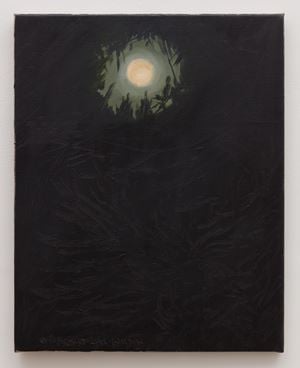 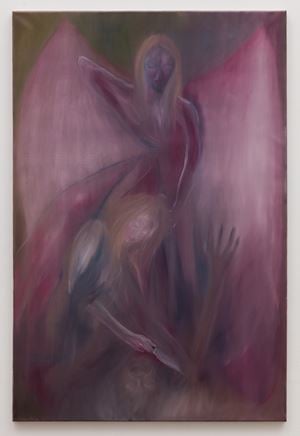 Anat Ebgi is proud to announce A Divine Dance, a solo exhibition by Srijon Chowdhury.


Srijon Chowdhury's paintings are characterised by moody symbolist compositions of richly coloured floral and domestic settings. He conjures poetic and allegorical narratives through the use of myth, memory, and repetition.

The works in A Divine Dance are charged with the emotions of new fatherhood, anxiety of looming apocalypse, and a romantic appreciation for life. Inspiration is drawn from a variety of sources such as daydreams, personal photos, sketches, and art history. The titular painting depicts a woman in a crimson robe holding a young child in one arm, while her other arm cradles her pregnant belly. They are engulfed in flames, encircled by fiery dancing figures, and framed by two hands forming an arch, a recurring device Chowdhury uses.

Pale Rider, the largest painting in the exhibition, depicts an angelic woman with flowing hair riding horseback; its monumental scale envelopes viewers in a mystical narrative. The rider appears translucent and wields a scythe as she moves across a meadow of blooming flowers—an allusion to death and birth. In the foreground, there is a fence composed from a poem by William Blake titled A Divine Image that Chowdhury has turned into a sigil—an ancient practice of transforming pictorial text into a symbol that is considered to have magical powers. The poem speaks about destructive abstracts of human nature: cruelty, jealousy, terror, and secrecy.

Chowdhury's work confronts universal physical and emotional themes. Soft aura of moonlight, glow of flowers, and dancing flames invite quiet contemplation. He sensitively vacillates between despair and hopelessness at the human condition, while brightening at joy, beauty, and hope that like flowers, life will go on.

Srijon Chowdhury (b. 1987, Dhaka, Bangladesh) completed his MFA at Otis College of Art and Design and his BFA from the University of Minnesota Twin Cities. He has exhibited his work widely in solo exhibitions and group exhibitions most recently at Foxy Production, New York, NY (2019); Antoine Levi, Paris (2018); Et Al, San Francisco, CA (2018); Upfor, Portland, OR (2018); Klowden Mann, Los Angeles (2016); and the Torrance Art Museum, Torrance, CA (2015). Chowdhury currently lives and works in Los Angeles, CA and Portland, OR.

Sign up to be among the first to know when new exhibitions by Srijon Chowdhury or at Anat Ebgi open.