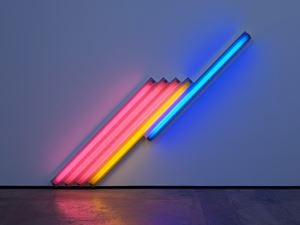 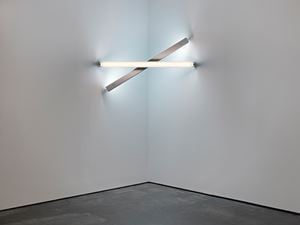 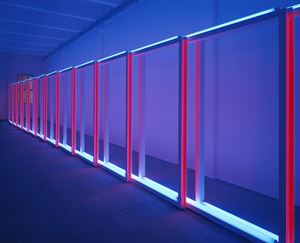 David Zwirner is pleased to announce an exhibition of work by American artist Dan Flavin at its recently opened Paris location. Spanning three decades of his career, this will be the first major presentation devoted to Flavin in the French capital since his 2006 retrospective at the Musée d'Art Moderne de la Ville de Paris.

From 1963, when he conceived the diagonal of May 25, 1963 (to Constantin Brancusi), a gold fluorescent lamp installed diagonally on the wall, until his death, in 1996, Flavin produced a singularly consistent and prodigious body of work that utilised commercially available fluorescent lamps to create installations, or 'situations,' as he preferred to call them, of light and colour. The exhibition will include key works from the artist's career from the 1960s to the 1980s, exploring the breadth of formal and conceptual variation Flavin was able to achieve with fluorescent light.

On view in Paris for the first time will be a large-scale, untitled 'barrier' that was first installed by the artist in Donald Judd's (1928-1994) loft building on Spring Street in New York in 1970. The work cuts across the expanse of the gallery and dramatically bathes the space in blue and red fluorescent light, altering the viewer's access to and perception of the surrounding architecture. Flavin's barriers, the first of which was executed in 1966, radically establish and redefine space and are among the artist's most significant works. As modular and serial structures, the barriers demonstrate Flavin's centrality to minimal and conceptual art movements of the 1960s and 1970s and count among the earliest examples of what is now commonly referred to as 'installation art.'

Also on view will be key works that explore the subtle chromatic and perceptual possibilities afforded by the commercially available variations of 'white' fluorescent light (cool white, daylight, warm white, and soft white). These include 'a leaning diagonal' of March 27, 1964 (to David Smith) (1964), a single-unit, cool-white lamp that leans against the wall and which is dedicated to the American abstract expressionist sculptor and painter David Smith (1906-1965), and untitled (to Cy Twombly) 2 (1972), an evocative corner construction of crossing cool-white and daylight lamps dedicated to American artist Cy Twombly (1928-2011). Also featured in the exhibition is an example of the artist's lesser-known use of circular light fixtures, which are horizontally arranged in untitled (1973) in an alternating sequence of cool and warm white light.

Flavin's interest in the play of sequences and variations is further evidenced in untitled (for Frederika and Ian) 1-4 (1987), a series of four individual works that each employ the same composition of five diagonally oriented lamps but whose colours vary according to a dynamic, permutational arrangement of red, pink, yellow, blue, and green light.

Seen together, the works in the exhibition embody what Flavin described as his goal of producing 'a sequence of implicit decisions to combine traditions of painting and sculpture in architecture with acts of electric light defining space.'1

Dan Flavin's (American, 1933-1996) first solo exhibitions were held at the Judson Gallery in 1961 and the Green Gallery in 1964, both in New York. His first show in Europe was in 1966 at Galerie Rudolf Zwirner in Cologne, Germany. In 1969 the National Gallery of Canada, Ottawa, organised his first major museum retrospective. His work was included in a number of key early exhibitions of minimal art in the 1960s, among them Black, White, and Gray (Wadsworth Atheneum Museum of Art, Hartford, Connecticut, 1964); Primary Structures (The Jewish Museum, New York, 1966); and Minimal Art (Gemeentemuseum, The Hague, 1968).

A major museum retrospective devoted to Flavin's work was organised, in cooperation with the Estate of Dan Flavin, by the Dia Art Foundation in association with the National Gallery of Art, Washington, DC, where it was first on view in 2004. The exhibition travelled from 2005 to 2007 to numerous venues, including the Hayward Gallery, London; Musée d'Art Moderne de la Ville de Paris (where it was co-organised by Suzanne Pagé); and Bayerische Staatsgemäldesammlungen, Pinakothek der Moderne, Munich, among others. From 2012 to 2013, a retrospective of the artist's work travelled from the Museum moderner Kunst Stiftung Ludwig, Vienna, to the Kunstmuseum St. Gallen, Switzerland. From 2013 to 2014, Artist Rooms: Dan Flavin travelled from the Tate Modern, London, to Gracefield Arts Centre, Dumfries, Scotland.

David Zwirner has represented the Estate of Dan Flavin since 2009.

Sign up to be among the first to know when new exhibitions by Dan Flavin or at David Zwirner open.