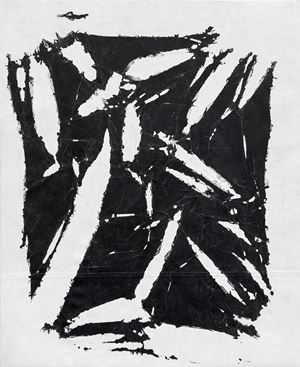 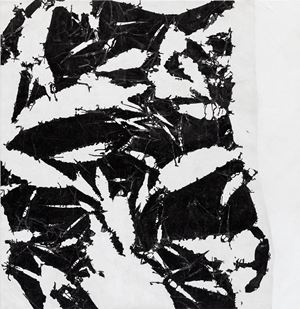 Gagosian is pleased to announce the representation of the Estate of Simon Hantaï (1922-2008). To inaugurate Hantaï's representation, LES NOIRS DU BLANC, LES BLANCS DU NOIR, an exhibition of black-and-white paintings and prints dating between 1951 and 1997, will be presented at Gagosian, Le Bourget.

Hantaï is best known for originating the technique of pliage (folding), in which a canvas is crumpled and knotted, uniformly painted over, and then spread out to reveal a matrix of abstract alternations between pigment and ground.

Born in Bia, Hungary, Hantaï studied at the Budapest School of Fine Arts from 1941 to 1946 before moving to Paris in 1948 to study and then-in the wake of the escalating Sovietisation of his homeland-deciding to stay. In Paris, he joined André Breton's circle of Surrealists, completing several fantastical biomorphic paintings before encountering the work of Jackson Pollock and breaking with Surrealist ideologies in 1955. Pollock's action paintings directly inspired Hantaï's own turn toward monumentally scaled abstraction. Hantaï began creating pliage paintings in 1960, conceiving of the process as a marriage between Surrealist automatism and the allover gestures of Abstract Expressionism. The technique dominated the work he made during the rest of his career, reemerging in diverse forms.

Although many of Hantaï's works of pliage feature jewel-like hues, he also created a number of these works featuring only black paint on bare canvas. LES NOIRS DU BLANC, LES BLANCS DU NOIR explores this subset of the artist's oeuvre: unmediated by colour, the monochromatic paintings and prints celebrate the aesthetic form of the crease and document Hantaï's evolving relationship with the act of painting.

On view are four large-scale oil and acrylic paintings from Hantaï's series of 'Études'. Produced in the late 1960s at the height of his experimentation with the pliage method, the series illustrates his efforts to eliminate the artist's hand from the painting process. Featuring a network of crisp creases of unpainted canvas spanning the composition, the Études conjure familiar images from nature-an undergrowth of leaves, perhaps, or a flock of birds in flight-but ultimately dissolve into pure abstraction.

Hantaï became a French citizen in 1966 and gained increasing recognition over the next two decades, culminating in an invitation to represent France at the 1982 Venice Biennale. Months later, however, he withdrew from the public eye, refusing to exhibit new works until 1998. Following this period of seclusion, Hantaï began altering his existing pieces-namely, one set of enormous pliage paintings exhibited in 1981 at CAPC Musée d'Art Contemporain, Bordeaux. He photographed these 50-foot-long paintings from an angle and created black-and-white silkscreen prints from the distorted photographic images, which he cropped vertically and printed amid stripes of white canvas. To Hantaï, silkscreen printing and pliage were inherently linked; both involved repeating an established technique to produce subtle variations.

For his 'Laissées (Leftovers)', Hantaï sliced the Bordeaux paintings into smaller sections and displayed each one as a new work in itself. Paradoxically, by taking a craft knife to the large compositions, he simultaneously inflicted an irreversible act of violence upon his own art and preserved the most fundamental visual components of his pliage paintings. Hantaï continued to work largely in isolation until his death in 2008, leaving behind a corpus of fractal-like compositions whose surfaces dramatise the intersection of intentional and incidental mark making.

Sign up to be among the first to know when new exhibitions by Simon Hantaï or at Gagosian open.