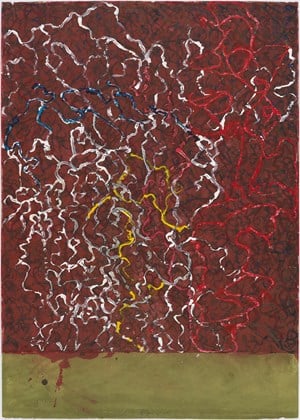 Gagosian is pleased to present Morocco, an exhibition by Brice Marden, traveling from the Musée Yves Saint Laurent in Marrakech, Morocco.

Nearly forty years ago, Marden visited Morocco for the first time, setting into motion a new line of artistic inquiry inspired by the intricate architecture and late afternoon light of the Rose City. This exhibition includes more than sixty works on paper, forty-eight of which were once contained in a workbook that accompanied the artist over the past decade. In the majority of the works, a square or rectangle is set within the white of the page, with winding lines and loose blots rendered in coloured ink or gouache forming tangled grids of varying densities. Infinitely fluid, Marden's gestures in yellow, red, and blue oscillate between foreground and background, light and darkness.

The cornerstone of the exhibition is Helen's Moroccan Painting (1980), a large-scale canvas titled for Marden's wife, also a painter. The canvas is divided horizontally into two rectangles—green on top (evoking Morocco's valleys) and burnt sienna below (recalling the red earth)—both applied in thick encaustic and inspired by Marden's memory of the landscape during a drive from Ouarzazate in 1978. An untitled work from 2018 swaps these colours, so that a narrower band of green appears at the bottom of the composition and the rest is deep red. What sets the two works apart most, however, is the vibrating veil of multicoloured lines that seems to float at the surface of the picture plane in the latter painting.

This gallery is temporarily closed and will reopen on May 4, 2021.

Sign up to be among the first to know when new exhibitions by Brice Marden or at Gagosian open.