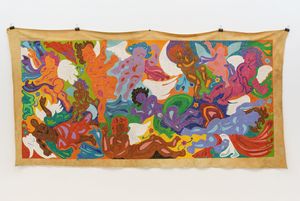 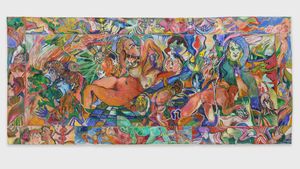 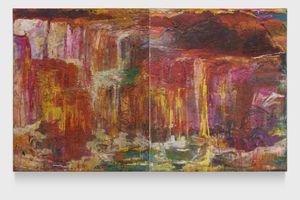 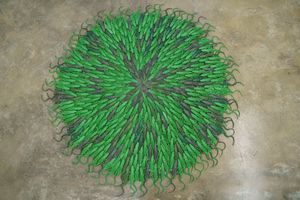 Nara Roesler Rio de Janeiro is proud to announce the opening of the exhibition Electric Dreams, curated by Raphael Fonseca, on May 29 2021. The presentation includes works by ten artists of different generations and from different regions of Brazil, whose works converge in their engagement with sensorial stimulation, physicality and the human body, while also evoking the oneiric realm.

The title of the exhibition, Electric Dreams, is derived from two intricately related sources. On one hand, it refers to a fiction film of the same title directed by Steve Barron and released in 1984 that narrates the rivalry between an architect and his computer, both passionately taken by the upstairs neighbour. Electric Dreams also refers to the music created specifically for the film titled Together in Electric Dreams, composed by Giorgio Moroder and Philip Oakey, best known for being the lead singer of the band The Human League.

How can a machine experience love, pleasure and sex, without a human body? According to Fonseca, the music complements the dilemma embedded in the cinematographic plot of the film, which he says 'invites us to dance and remember the gift that is life and our capacity to dream.' The dream is thus a space of seemingly impossible encounters, a place where we undergo sensorial experiences shaped by desire, and free of the limitations imposed by matter.

The exhibition engages with this idea in showcasing an array of different artistic practices, all of which are able to evoke different sensations. Each artist has developed their own strategies in the strive to achieve such effects, notably including the use of vibrant colours, as is the case in the work of J.Cunha, Thiago Barbalho and Victor Arruda; or the dissolution of forms, as can be seen in the work of Ana Almeida and Cristina Canale, where the expressivity of the strokes and gestures seem to escape figurative intentions; or even techniques of image repetition, of seriality, in the work of Lia Menna Barreto, and of incessant variations within a same theme, in that of Renato Pera and Virgílio Neto; or finally, in engaging with the body as a theme, transforming it through oneiric figures as did Kauam Pereira, or through the grotesque as did Maya Weishof.

Fonseca notes that the body not only emerges as a theme in the drawings, paintings and installations exhibited in the gallery, but also as evidence of the creative gesture, of the handmade, which requires a negotiation between two bodies, that of the artist and of the medium. In this sense, the works presented take on the potential of embodying the artists' dreams, carrying traces of individuality that simultaneously invite the public to join in, to dream together.

Electric Dreams encourages us to reflect on the importance of imagination and reverie, in times where the uncertainty of isolation seems to forbid us from projecting the future, while also reducing our physical stimuli to the repetition of an everyday routine, transforming the body into somewhat of a machine. In this sense, dreaming becomes an escape from reality, a form of resisting the cruelty of the quotidian, and of generating new encounters.

Electric Dreams is part of the Roesler Curatorial Project, directed by Luis Pérez-Oramas, which asserts the gallery's commitment to supporting innovative and experimental projects, stimulating the dialogue between different agents of the artistic circuit. The exhibition is curator Raphael Fonseca's second presentation at Nara Roesler, following On the shoulders of giants, which kicked off the gallery's 2021 exhibition program in São Paulo and will continue on to Nara Roesler New York in June 2021.

3 new artworks and 1 new exhibition have recently been added by Galeria Nara Roesler.
Sign up now to be among the first to know when new content is added.
Sign Up