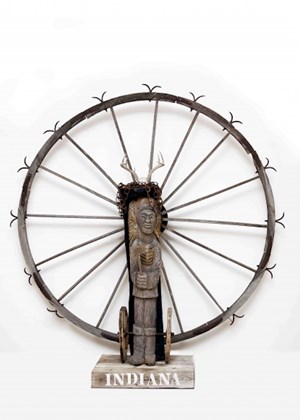 Galerie Gmurzynska is pleased to return to Art Basel (BOOTH G3) for the 49th consecutive year. Building upon its reputation for staging special exhibitions at the fair, the gallery will present two exclusively curated Cabinet Exhibitions (Robert Indiana and Matta/Duchamp) alongside a selection of Classic Modern as well as Post-War works, including three major paintings by Pablo Picasso and a large scale canvas by Wifredo Lam, whose retrospective runs parallel at Galerie Gmurzynska's Zurich premises. To round out the selection is an outstanding Ed Ruscha painting, which in turn alludes to the influence of Robert Indiana on artists working with words.

Robert Indiana was a fixture on the New York art scene from the late 1950s and an instigator of the Pop and Conceptual Art movements. Widely known today for his now famous LOVE paintings and sculptures, he was however much more versatile and subtle as an artist: he pioneered the use of numbers and letters in art and his paintings and sculptures frequently contain coded personal, historical, social or political messages. To honour him and commemorate his death in May 2018, at age 89, Galerie Gmurzynska has assembled a rare selection of his works, including paintings and monumental sculptures from the 1960's to the 1990's. Galerie Gmurzynska worked closely with Robert Indiana over the last 15 years and is proud to celebrate this association with a dedicated tribute exhibition.

This specially curated exhibition with its accompanying publication brings together the work of two giants of 20th century art, Marcel Duchamp and Roberto Matta. The show seeks to illustrate how they influenced and inspired one another in the key decades during and after the Second World War when both of them migrated to New York. The accompanying book, published by Galerie Gmurzynska, includes texts by Professor Dawn Adès and Norman Rosenthal. It coincides with a broader re-evaluation of the importance of Matta internationally as well as of the influence of Duchamp on the work of 20th century artists, notably in the exhibition Duchamp Dali, which was staged at the Royal Academy in London in 2017-2018, curated by Dawn Adès along with art historian William Jeffett. Duchamp wrote admiringly of Matta, most famously in 1944, 'Still a young man, Matta is the most profound painter of his generation.' Another admirer was William Rubin, from 1968 to 1988 director of painting and sculpture at MoMA, who stated in 1985: 'Matta became the only painter after Duchamp, to explore wholly new possibilities in illusionistic space.'