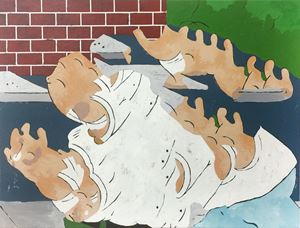 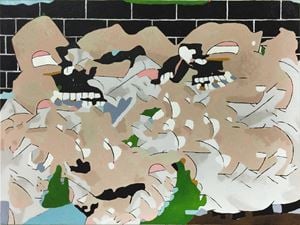 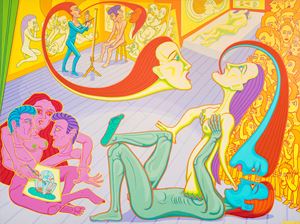 Multiverse is Gazelli Art House's first group show entirely devoted to painting, with artists exhibiting at the gallery for the very first time. Christopher Battye, Francesca Blomfield and Dustin Pevey represent three generations of painters who regardless of age are reckoning with kindred ideas while interrogating the limits and potential of their medium, one which anchors us to traditional form in an otherwise hyperactively evolving visual realm.

Christopher Battye's paintings are full of the lively Soho and Chelsea community of The Colony Room infamy, often featuring scenes from nights out and alcohol inspired histrionics. The paintings are at once fun and furious, conveying a mayhem that relates to a real dynamic sense of living in the centre of the capital in its most pulsing moment. His two-headed, multiply-limbed and intriguing amorphous caricatures are witty and ironic, powerful and playful whilst often frightening. We see a riot of colour and charge in images of spinning heads, psychosexual drama and theatrical violence; the mood is hectic and alive, grounded in archetype, symbolism and rampant use of colour. The artist casually deals in psychoanalytic concepts of splitting, schizoid fantasy, false selves, and narrative therapy with the symbolic potency and awareness of the Marseilles tarot deck and Jungian allegory. This relationship with the transformational process of committing psychic charge to paint-a medium which is deliberately concerned with slowness-allows for a space in which to meditate, consider and recreate a subject position threatened by overwhelm.

The work of Francesca Blomfield is sympathetic to the notion of deconstructing / unrepressing in the act of artistic expression, and her method of painting contains a similar energy of conflict. The artist conceives painting as methodological self-surgery in which she relates interiority via alternative histories of art making. The works are small but highly concentrated and textured with a baroque excessiveness that fizzes over into the inclusion of text. The meanings of the words are folded into the wrought surface of the paint, creating a unified atmosphere of confusion and tension. The words are both enigmatic and activated by the energised application of paint and colour, containing an unknowable force at work on the subconscious mind. Blomfield introduces several unexplained motifs (a key symbol for example) left hanging for a sense of poetic intrigue. The use of words and symbols seem to work in resistance to the surface of the paintings, like glitches or accidents fighting for prominence in a turbulent visual field.

Dustin Pevey's paintings operate similarly in terms of using a layering form, drawing on digital compositions and found images from within our contemporary visual hyperstimulation. His works are manic compositions of symbolic scraps from the everyday; advertisements, logos, graffiti, cartoon, details of paintings and photos of digital prints of paintings. The works offer a kind of formalised screenshot of our digitised psychic life, the cyber environment into which we have all uploaded our thought processing. The paintings produce a uniquely desolate dimension, at once vacant and busy, which corresponds to much of our experience of internet / consumer-driven culture. The symbolism seems to offer a kind of frazzled world-view committed to representation and form for the sake of emulating the obsessive, distracted, micro-interactions to which we are increasingly accustomed.

Christopher Battye (b.1942) studied print-making at Liverpool College of Art, before leaving to live and work in London. Throughout the 80's his work was exhibited in gallery spaces, and simultaneously in the restaurants and drinking holes of Soho and Chelsea which sustained the culture from which he drew inspiration. He's contributed to a number of gallery group exhibitions throughout the 80s and 90s including having had works on display in the Royal Academy Summer Exhibition. Multiverse represents the artist's first show in fifteen years.

Francesca Blomfield (b. 1990) is a contemporary visual artist based in London. A former student at Chelsea College of Art and Design and the Royal College of Art, she mainly works with painting often involving text in overlay. Blomfield received the Jerwood Painting Fellowship in 2015, which allowed her to have touring shows in the UK between 2016-2017. She has had two solo shows in London with Barbican Arts Trust and the Horse Hospital, as well as group shows in London, Canada and Mexico.

Dustin Pevey (b.1980) is an American contemporary artist concerned with how space (internal vs. external as well as physical vs. digital) affects the self. Pevey's work has been presented internationally in multiple solo exhibitions and group exhibitions; at Galleria Annarumma in Naples, Italy, Galerie Gabriel Rolt in Amsterdam, Netherlands, Bill Brady in Miami. He was also featured in international art fairs including Dallas Art Fair and Art Basel Hong Kong. Pevey currently lives and works in Brooklyn, New York. 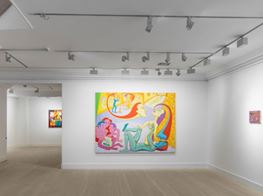 The most attractive show I’ve seen recently at one of these is at the Gazelli Art House in Dover Street, (Top Photo) which is a handsome gallery on two floors, with its ownership rooted (of all places) in Baku. The exhibition is called Multiverse and runs till 11th January, so there is time to see it.