Paterson's artistic practice is cross-medium, multi-disciplinary and conceptually driven, with emphasis on nature, ecology, geology and cosmology. As Erica Burton, curator at Modern Art Oxford has said 'Katie Paterson's work engages with the landscape, as a physical entity and as an idea. Drawing on our experience of the natural world, she creates an expanded sense of reality beyond the purely visible'.

Recent projects include her one hundred year artwork Future Library, Fossil Necklace, Timepieces (Solar System) and a series of Campo del Cielo meteorites in which ancient meteorites have been cast, melted and re-cast in their original form. In 2014, Paterson became the first artist to send an art work to the International Space Station when the smallest of these meteorites was launched into space and docked with the ISS. A major new public artwork, Hollow, was unveiled for the Department of Life Sciences, University of Bristol, in May 2016. Totality (2016)—a commission with Arts Council Collection and Somerset House—is a mirror ball comprising over 10,000 images of solar eclipses, nearly every one that has been documented by humankind either by illustration or photography.

Paterson's work has been exhibited as part major group exhibitions such as Tate Triennale (2009), the landmark touring exhibition Light Show first presented by the Hayward Gallery (2013) and Storylines at the Guggenheim Museum, New York (2015). Recent solo exhibition include Kettle's Yard, Cambridge (2013); FRAC Franche-Comté, Besançon (2015) and in the summer of 2014, Ingleby Gallery presented Katie Paterson: Ideas as part of the GENERATION nationwide programme of exhibitions. Paterson's largest solo exhibition so date, Syzygy, was presented at The Lowry, Manchester in the summer of 2016.

In January 2014, Paterson was announced as the recipient of the 2014 South Bank Sky Arts Award for Visual Art. In 2015 Paterson was shortlisted for the 46th PIAC (Prix International d'Art Contemporain / International Prize for Contemporary Art) for her artwork Campo del Cielo, Field of the Sky (2014). Paterson's work is held in public collections internationally including the Guggenheim Museum, New York, USA; Art Gallery of New South Wales, Sydney, Australia and Frac Franche-Comté, France.

In the spring of 2019, Katie Paterson's work will be paired with a selection of paintings and drawings by JMW Turner at Turner Contemporary Margate.

I remember exactly where and when I decided to write a book about the moon: lying on my back in a dentist's chair, waiting for the anaesthetic to take effect. To distract his patients, the dentist had

Read More
Related Press The Meaning of the Moon, From the Incas to the Space Race 12 September 2018, The New York Times

COPENHAGEN — Outside Denmark's Louisiana Museum of Modern Art on a recent late-summer morning, a few sunstruck visitors were sprawling on the turf of the sculpture garden, between monumental outdoor

The Turkish novelist Elif Shafak is to follow Margaret Atwood, David Mitchell and Sjón as one of the 100 contributors to the Future Library, an art project that will only be seen by readers in 2114, w

The prizewinning author, poet, essayist and literary critic Margaret Atwood has been named as the first writer to contribute to Future Library, Katie Paterson’s 100 year artwork in Oslo, Norway. A t

‘Fossil Necklace is a string of worlds, with each bead modestly representing a major event in the evolution of life through a vast expanse of geological time. From the mono-cellular origins of life on

Katie Paterson's work is a map of dead stars, 27,000 of them, or all that have so far been observed and recorded. But, as she tells us in this film, if you were going to make a map of all the dead sta 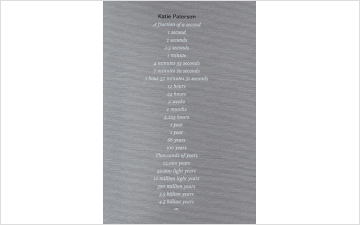