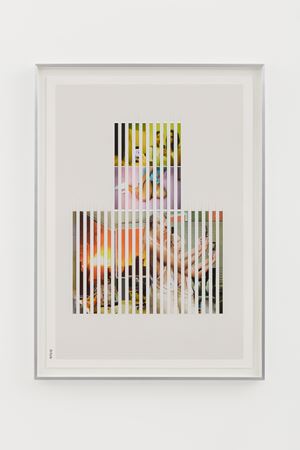 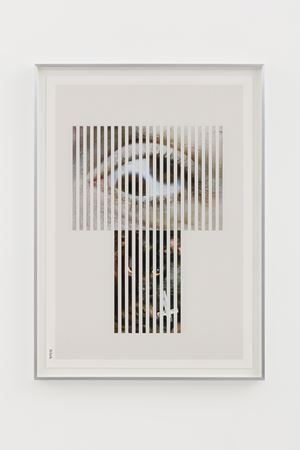 We are delighted to announce Goshka Macuga's third solo exhibition at the gallery. Since her 2016 exhibition To the Son of Man Who Ate the Scroll at Fondazione Prada in Milan, Macuga's practice has focussed on studying the art of rhetoric and artificial memory as intricately linked tools for the organisation and advancement of knowledge. For her exhibition at Kate MacGarry, Macuga presents 18 new collages and a series of small woven tapestries from an ongoing series initiated in 2018.

The collages refer to the history of computer programming which began with British mathematician Ada Lovelace in the first half of 19th Century, and continues with the recently proposed programming system instructions by software scientist Stephen Wolfram. The collages, in which background and foreground subjects are alternated and combined like a textile grid, are specifically designed as patterns for breaking visual information. The information–printed material selected from resources such as National Geographic–is woven into the graph paper in a repetitive way.

This series attempts to systematise Macuga's interest in different fields of knowledge, and create a method similar to computer programming that allows the artist to restructure groups of visual references. The weaving element and inclusion of photographic images mirror Macuga's tapestry works which are woven by a machine programmed to perform a previously labour intensive, human task. The same looms used for weaving Jacquard fabrics were used by Lovelace and Charles Babbage in the development of the analytical engine that would be able to store data and perform sequences of instructions defined on punch cards. Lovelace noticed that the instructions and data could represent letters, images and music as well as numbers; an early vision of modern computers. Macuga's collages observe the history of humanity, the development of technology and a post-human future. Numerous images used in the new collages are representative of the ecological crisis we are facing today.

Goshka Macuga was born in 1967 in Warsaw, Poland and lives and works in London. Earlier this year, she conceived What Was I? a post-apocalyptic exhibition at Prada Rong Zhai, Shanghai. She has had solo exhibitions at New Museum, NY; Fondazione Prada, Milan; Schinkel Pavilion, Berlin; MCA Chicago; Whitechapel Gallery, London; Tate Britain; Kunsthalle Basel; and the Walker Arts Centre, Minneapolis. She was included in Documenta 2012 and nominated for the Turner Prize in 2008. Her work is included in numerous public collections including the Tate, MoMA, Government Art Collection, Arts Council Collection, MCA Chicago and Castello Di Rivoli.

Sign up to be among the first to know when new exhibitions by Goshka Macuga or at Kate MacGarry open.