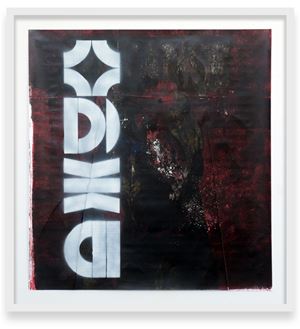 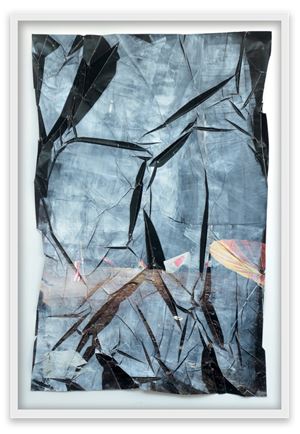 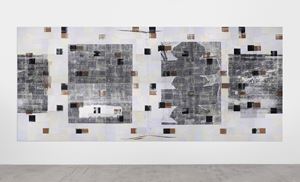 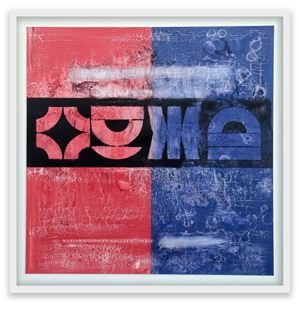 Galerie Marian Goodman is pleased to announce its first major exhibition by Adrián Villar Rojas. It is perhaps one of the most comprehensive interventions in the history of the gallery in Paris, encompassing and connecting each of its rooms, and invoking the past essence of the building as a former domestic environment.

The artist’s speculative inquiry on the nature of the human imagination emerged from time spent during the lockdown watching and recording thousands of hours of publicly available CCTV streams online, from caged orangutans in quarantined zoos to underwater algae and feeds from NASA satellites. In La fin de l’imagination, Villar Rojas asks how COVID-19 is affecting time—our human time, our language, our systems of representation. For example, if meaning is created by our imagination, a clock or a calendar is no less fantasious than a Jackson Pollock painting. Clocks and Pollocks are equally subjective. But, all fabulations are supported by a decisive element: power. The power of revolutionary France in 1793 was not enough to implement Napoléon’s newly invented decimal calendar worldwide, it survived a mere 12 years in France, but the wealth and influence of the United States after World War II was certainly enough to position Abstract Expressionism in the contemporary art canon. Through Villar Rojas’ world-building, echoes of these constructs, the clock and the calendar, return to Paris like ghosts in a haunted house.

At the end of the 1990s and early 2000s, with the Internet yet to come and books impossible to borrow or too expensive to buy, Villar Rojas’ generation of arts students in Rosario, Argentina, depended on booklets (cuadernillos) comprised of photocopies usually taken not from the original source (i.e., books), but other copies, always losing more information from one to the next series of copies. The distorted grainy, black and white reproductions of such artists as Rothko and Pollock were an unpredictable subversion of the 'subject matter' and a silent revolution in those students’ subjectivity.

Thus, the teaching of 'Art History' in the School of Fine Arts at the National University of Rosario, which in fact is Western Art History that rarely includes Latin American narratives, is turned into the barely decipherable remains of a lost visual heritage where the imagination of those young students found a fertile ground to breed their own mutants, made more of fantasy than of information: 'It was almost like these photocopies were shouting: there are no hard facts, only fabulation and speculation!' says Villar Rojas. 'Art Histories, or rather Art Stories, are for us students to reclaim and hack'.

New disrupting imaginations become evident in the lower gallery, where Villar Rojas introduces a sequence of site-specific murals transposing reproductions of pages from his own preserved booklets of photocopies onto an archive of posters, invitation cards and envelopes that embody a physical history of printed matter produced over Galerie Marian Goodman’s 25-year history. Here, different juxtaposed layers of Capitalocene artistic heritage seem to expose a new visual genetic code resulting from the infinitely singular story of the art education of an individual coming from Rosario, Argentina, a country inscribed in a region that historian Alain Rouquie calls the Far West.

But, is humanity in a terminal crisis or in an era of light-speed revolutions? Perhaps, as in quantum mechanics, humanity now finds itself in both processes at the same time. La fin de l’imagination can thus also be the possibility of new disrupting imaginations with its own revolutionary conventions. In this spirit, Villar Rojas proposes a fabulative mutant panhuman language that may be used in a thousand years' time, or tomorrow. This mark-making system gathers various forms with different levels of association to current and past human writing mechanisms. First appearing for a comic-publication accompanying Villar Rojas’ solo show Poems for Earthlings at the Oude Kerk (Amsterdam, 2019), this former graphic apparatus migrates to Paris and sprouts and mutates into a friendly vandalising force, like Godard’s La Chinoise, to become a central element of La fin de l’imagination ecosystem.

La fin de l’imagination also encompasses an exhibition of works on paper at Librairie Marian Goodman. Created using 12 designs of his own past exhibition posters from 2003 to 2020, the posters have been folded, creased, covered or enhanced with coloured pigments. They are predominantly intervened by panhuman stencils, transforming—in the artist’s own narration—into political propaganda or battle flags recovered from futuristic wars.

Adrián Villar Rojas has built a practice working across media to create immersive environments and experiences that seem to be in a state of perpetual space-time travel. Evolving over years towards the development of topography-based, mutant, organic-inorganic systems, Villar Rojas invites viewers to become explorers of an unpredictable microcosmos of his design, where the future, past, and alternate versions of our own present interact as a constantly changing totality. By way of this world building, Villar Rojas posits the question: what if we could see and think of ourselves—humanity—from an alien perspective; detached, unprejudiced, even amoral? What if we could see and think of ourselves from the border of our own completed path?

Sign up to be among the first to know when new exhibitions by Adrián Villar Rojas or at Galerie Marian Goodman open.