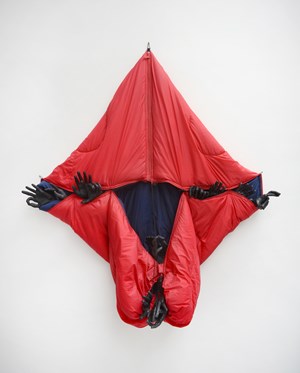 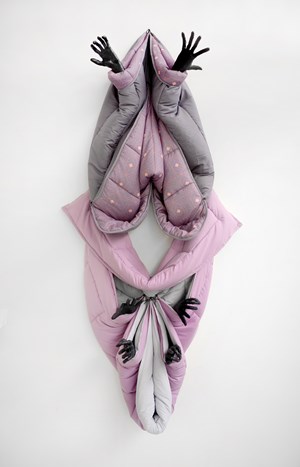 Marian Goodman Gallery in Paris is pleased to present an exhibition by Annette Messager with more than a score of new works and a set of new drawings. A notable feature of this ensemble is her first video installation, Lost in Limbos (2019).

The exhibition opens with a series of mural sculptures titled 'Sleeping Songs' (2018-2019). To create them, Annette Messager worked with coloured sleeping bags, quilts and hooded puffer jackets. Emphasising their tremendous versatility and rich variety of meanings, the artist states: 'The quilts, sleeping bags, puffer jackets and duvets are recent materials-warm, soft, protective cocoons. They take all kinds of forms and are with us day and night, on our clothed or naked bodies. [...] They can suggest sleep, dreams or nightmares, love, sexuality, or isolation.'

The undulating folds arranged to create evocative volumes and forms (a heart, a cross, etc.) clearly mark the absence of bodies. It is therefore a real surprise to discover a multitude of human hands emerging from the folds, gaps and orifices orchestrated by the artist. How many scenarios become possible when two hands reach out to one another but fail to meet, when several hands overlap and lightly touch? It would seem, that arms and hands, as a language, the tools of our body, are the guiding thread in this exhibition. The forms are signs and create meaning. Certain sequences of sculptures seem to relate to stages of a life: Birth, childhood in Jumping, love in Sleeping Purple Passion, and isolation in the solitary form of Lonely, placed on the floor, withdrawn into itself.

In the lower gallery, like a foreword to the video installation, we find Innocents-Help (2017). This work, inspired by The Massacre of the Innocents painted by Nicolas Poussin in about 1629, consists of writing suspended from the wall, nets, bodily fragments and a puppet that is slumped on the floor. Just like the works in the series 'Sleeping Songs', this installation pays homage to the most fragile people, to the rejected, the unhoused, those whose lives are reduced to a sleeping bag and the dignity of a roll of lavatory paper, as suggested by the work 3 Pantins PQ (2015).

Following this antechamber, the presence/absence of ghostly images haunts the video installation Lost in Limbos (2019). Like chameleons, fragments of bodies seem to surge out of the walls. Locks of hair take flight with wandering hands. Without a word of warning, a woman's rounded belly shows its protuberant navel and lets itself be caressed, felt. There is a troubling, tense mix of Eros and Thanatos, the élan of desire and abandon.

In the last room Annette Messager has laid on the floor Petite Babylone (2019), a new installation that she describes as a 'Black Babylon, destroyed, invaded by animals-a duck, a squirrel, a seagull, a hamster. Hands, fingers, come out of certain structures, forming shadows that spin and shift on the walls.' It is a ballet of shadows and light created by the rotating movement of several light sources. Annette Messager leaves us with a sense of the end of a world; for this artist with multiple identities always seeks to make visible plural realities.

A new series of drawings in acrylic will be presented at Librairie Marian Goodman. If some seem to follow on from her recent, playful and fantastical representations of the female anatomy, others reveal the insubstantial presence of ghosts and little spirits thrusting out of lamps and teapots.

Annette Messager was awarded Praemium Imperiale for sculpture in 2016. She won the Golden Lion for best national pavilion at the 51st Venice Biennale in 2005. The Tel Aviv Museum of Art will present a major exhibition of her work in 2020. More recently, she has exhibited at the Institut Giacometti in Paris (2018), the Institut Valencià Art Modern (IVAM) in Spain (2018), and the Villa Medici in Rome (2017). In France, an important exhibition was put in at the Musée des Beaux-Arts and at the Cité de la Dentelle et de la Mode in Calais, in 2015-2016. In 2014 Messager had major exhibitions at the Museum of Contemporary Art MCA, Sydney, and at K21 in Düsseldorf. The venues of her earlier solo shows have included the Museo de Arte Contemporáneo in Monterrey (MARCO), the Hayward Gallery in London, the Espoo Museum of Modern Art (EMMA), Espoo, the National Museum of Contemporary Art, Seoul, and the Mori Art Museum in Tokyo. A major retrospective of her work was organised by the Centre Pompidou in 2007.

Annette Messager was born in Berk-sur-Mer in 1943. She lives and works in Malakoff, just south of Paris. 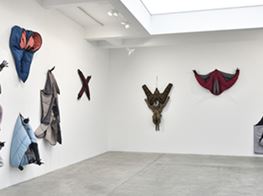 Soft, colorful, and haunting, Annette Messager's latest sculptures are made from sleeping bags, puffer jackets, and quilts. Collectively titled "Sleeping Songs," 2017–19, these mostly wall-mounted works have been folded, pinned, draped, and sewn in ways that suggest various anatomical forms—including many whose central droopy...

Sign up to be among the first to know when new exhibitions by Annette Messager or at Galerie Marian Goodman open.