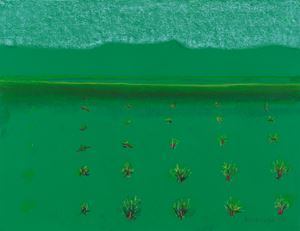 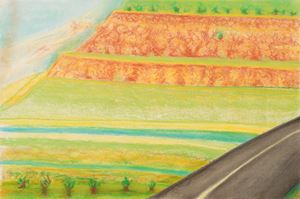 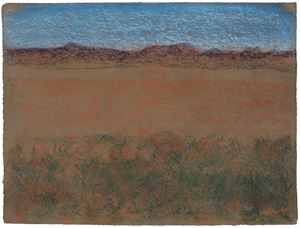 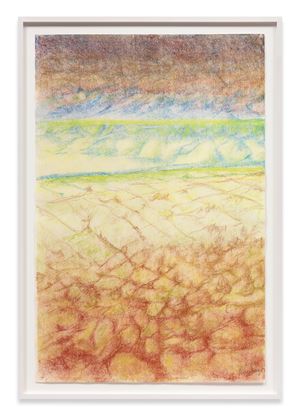 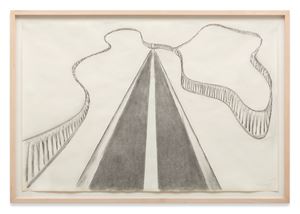 Monika Sprüth and Philomene Magers are pleased to present a new exhibition of works on paper by the late American artist Richard Artschwager. Bringing together coloured pastel drawings, this exhibition will explore the artist's newfound interest in landscapes that arose during the last years before his death in 2013. These works have been rarely exhibited since their creation, and provide a unique insight into the artist's approach to colour and subject matter in his later life.

One of the most important artists to emerge during the twentieth century, Artschwager's playful and diverse oeuvre has influenced generations of younger artists by challenging assumptions about perception, and the aesthetic, material, and spatial experience of art and the everyday. Spanning over forty years, Artschwager's practice explored the mediums of sculpture, painting and drawing in order to understand the relationship between art and objects, and the environment they inhabit.

Landscapes first entered Artschwager's repertoire in 2007, following a visit to his childhood home of New Mexico in 2006. The coloured pastel drawings recall landscapes first introduced to him as an artistic subject by his mother, an artist herself, during trips to the desert surrounding Las Cruces. When the Artschwager family first moved to New Mexico from Washington D.C. in 1937, the young Richard thought of it as a great adventure. Remarkably, it wasn't until his mid-eighties that he began to revisit these early memories within his art. These later works signal a departure from his established themes, exploring the materiality of the natural world. Departing, too, from his favoured grisaille tones in paintings and drawings, Artschwager opts for an unusual choice of palette—muted yet rich. In a very poetic sense, these images engage with artistic concerns and personal memories that endured throughout Artschwager's career—therefore, this series could be seen as taking the artist full circle from childhood to old age.

The drawings in the exhibition can be interpreted as a continuity of Artschwager's belief that art lies as much in seeing as in making. Strong compositional elements are typified by bands of dense, tonal colours of varying textures and widths. Artschwager's inimitable tactility is unreservedly present in these works: favouring substantial textures, he sets the focus on the effects of pastels on different types of paper ranging from standard white paper to coloured, velvet, and sandpaper. The surface of the paper thus becomes an essential attribute of the work itself.

Recalling the imagery of classic American road movies, these drawings invite the viewer to join Artschwager in revisiting the landscape of his early memories. Gazing out of a backseat window into the vast landscape is a universally familiar experience, yet evokes very personal memories; the scenery passing by in the distance allowing for contemplation in the face of nature's duality of liveliness and timelessness.

Richard Artschwager (*1923 in Washington, D.C-†2013), studied chemistry, mathematics, and physics in the 1940s, before studying art and working as a furniture designer and maker throughout the 1950s. He began exhibiting as an artist at the very end of the 1950s. His work has been the subject of two major retrospectives by the Whitney Museum of American Art; in 2012, touring to Hammer Museum, Los Angeles; Haus der Kunst, Munich; and Nouveau musée national de Monaco; and in 1988, touring to San Francisco Museum of Modern Art; Museum of Contemporary Art, Los Angeles; Palacio de Velásquez, Madrid; Centre Georges Pompidou, Paris; and Staedtische Kunsthalle, Dusseldorf. Group exhibitions include Fondazione Prada, Venice (2014, 2013), Coleccion Jumex, Mexico City (2011), PS1 Contemporary Art Center, New York (2009) and the Museum of Modern Art, New York (2005). A new retrospective exhibition curated by Germano Celant opened at MART Rovereto in October 2019 and travelled to the Guggenheim Bilbao in February 2020.

Sign up to be among the first to know when new exhibitions by Richard Artschwager or at Sprüth Magers open.