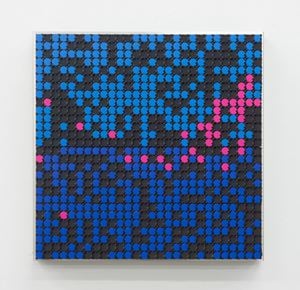 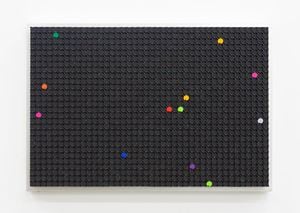 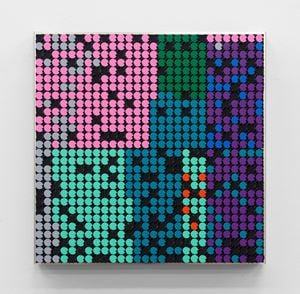 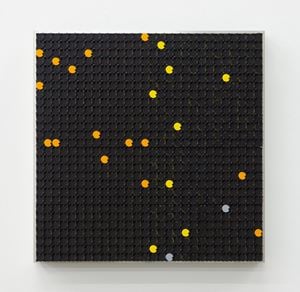 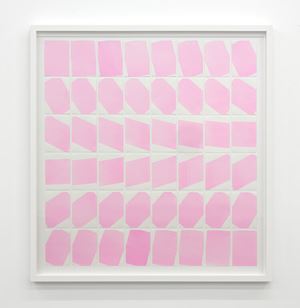 We are pleased to present new works by Australian artist Rebecca Baumann from 27 November—21 December 2019.

Baumann's mesmerising works are shaped by her interest in psychology, sociology, and art history. Using light, colour and random pattern movement, she seeks to evoke a response, activating viewers' emotions in fleeting and unexpected ways. Working across various media including installation, kinetic sculpture, and performance Baumann's practice has produced both room-filling, immersive spaces and wall-based art works that arrest and intrigue. While earlier work has drawn on materials including cascades of golden tinsel, balloons, and smoke to offer a sense of occasion that varies from celebration to danger, it is colour that has remained a psychological constant throughout her practice.

'I think of colour as being emotive in the sense that it has the ability to go beyond conscious thought, to create a heightened sense of feeling in the body' Baumann has commented. Colour is commonly used among many cultures for communicating information and creating emotions. While the influence of some colours seems well known and widespread—red is said to increase the heartbeat and increase hunger—others are less so, and using colour to evoke a particular emotion is not a clear cut science. However, in the same way that many shoppers are driven by emotional rather than rational forces when it comes to making decisions, colour shapes human behaviour and influences perception. The Rose of Temperaments was a colour diagram devised by the German writer and statesman Goethe in the late 18th century. The diagram detailed the affective qualities of colours, matching 12 colours to human occupations or their character traits (tyrants, heroes, adventurers, hedonists, lovers, poets, public speakers, historians, teachers, philosophers, pedants, rulers), grouped in the four bodily humors or temperaments. Our contemporary visual landscape is no less immune, note the propensity of primary colours (especially red, blue, and yellow) most commonly used for superheroes, while a palette of secondary colours is employed for the villains and baddies on our screens. Colour is a language speaking to us in ways we are not always aware of.

The intimate relationship between colour and emotion is joined by movement and time as critical factors in Rebecca Baumann's practice. Her art works are never still, they ripple, flip, or burst in visually demonstrative examples of the passing of time. Often working with simple mechanisms, Baumann attempts to manipulate and programme the action to a certain point, then let the materials take over. Baumann's new kinetic works are created using flip-dot displays, an electro-magnetic signage originally created for the stock market. As the early technology audibly flips and alters, colour constellations and automatic drawings form. Stripping this outdated technology of its function, the artist has reimagined it as a choreography where control gives way to movement and unexpectedly still intervals, the chance configurations of colour and pattern feeding anticipation for what comes next. In action the works feels like a code or pulse is being transmitted, one communicated in colour, sound, and motion.

Joined in the gallery by a work composed of 48 small watercolours, Baumann continues her unconstrained exploration of time and movement across varying forms. Moments in Movement (2019) begins and ends in monochrome, but in-between a pink rectangle rotates through various postures, seeming to pivot and swoop across the series of sheets. Baumann has toyed with the perception of motion before, creating kinetic objects, optical illusions, and displacing the audience while the work remains still. Interested in creating something that offered a sense of movement and time for this new work, Baumann drew on the film industry standard of 24 frames per second, doubling this across 48 sheets to suggest and create visual stimulus in a static object. The exhibition is framed by an intervention on the gallery windows, where strips of transparent coloured film form a frame looking out onto the street. Overlapping in the corners and illuminated by the incoming light, colours mix, blending and bending to form new combinations, relationships and affects.

Sign up to be among the first to know when new exhibitions by Rebecca Baumann or at Starkwhite open.