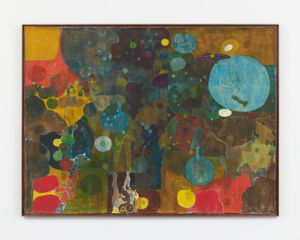 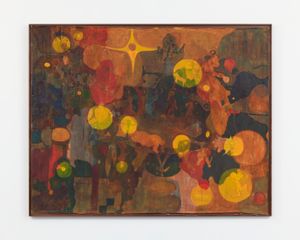 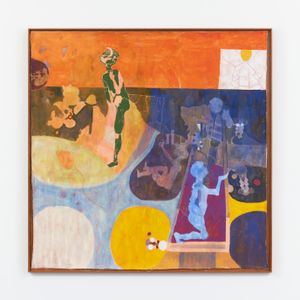 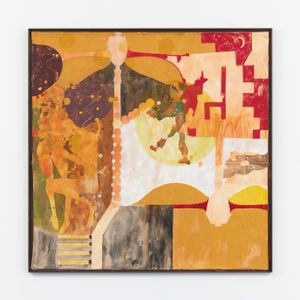 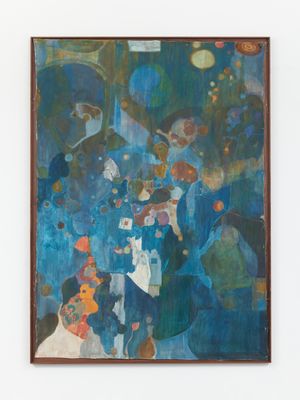 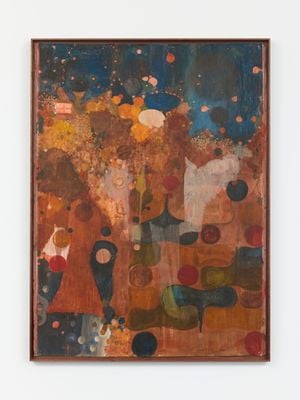 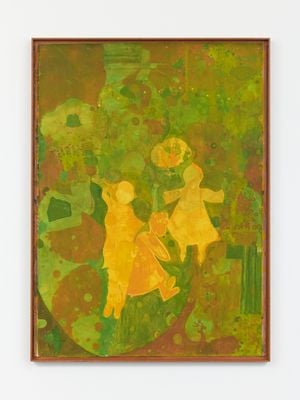 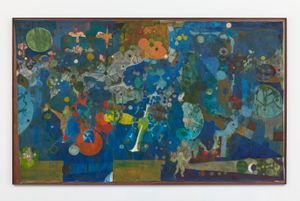 Taka Ishii Gallery is pleased to present a solo exhibition by Justin Caguiat, "Doll" from Saturday, March 27 to Saturday, April 24. This is Caguiat's first solo exhibition with the gallery, and will be composed of new paintings produced in 2020.

'I lived with one of Justin's paintings for a few weeks. We shared a studio. I was breaking up. When I knew he was painting I would idle after work and arrive late. I'd say 'Hello' if he was still there and work for a while myself until he departed. Then I'd wash in the sink and sleep on the floor. He didn't remark on the change in my habits.

One of these mornings, the door between our rooms open, I stared over at his painting with the wide, patient view of a convalescent. It was on unstretched linen and pinned to the wall. The sizing and weeks of accumulated layers had stretched it taut, pulling the edges in, drawing against the pins. I couldn't see any of his chalk or pencil sketches. He'd made so many changes and adaptations the forms and subjects phased in and out of depth. Even in dim light the painting seemed irradiated by a strobe, the picture plane a twinkling low relief. I saw a lot. I saw plant propagation ... cuttings, divisions, budding, grafting. A jumbled, composite form of big studio cel animation ... background painter carefully lighting each high-rise window, compositor swirling cut-up cels, colorist popping everything in reach. Meyer-Amden's "archaic Apollos" ... his own hieratic forms, coronas, motifs. The Nabis. Lily's pregnant swell. O in embryo and fetus and beating the floor with his sunflower on his second birthday, petals everywhere.

Memory is not a linear thing. It's like looking at the stars. Every work of art is a portion of arrested experience. An emanation of past time. I sat up and searched my notes. "A graph of an activity now stilled, but a graph made visible like an astrological body, by a light that originated with that activity"[1]. I think this is the thought I had, laying there. Like all exquisite things it was delicate, utterly transparent, and only partially mine. Then I lay back down and thought about memory loss and decay ... switching the high-rise windows and his petals for spores and hyphae, swapping architecture for base microtopography—just some mold on a thing.'

Caguiat was born in 1989, and currently lives and works in New York and Oakland. Caguiat recently presented solo exhibitions at Modern Art, London (2020) and 15 Orient, Brooklyn (2018), and has participated in group exhibitions at galleries and project spaces in North America, and Europe. Other projects include performances at the Kunsthalle Zürich (2017) and The Sunroom, Richmond (2017). His collection of poems entitled A RAT, A DOG, A BOY was published by Codette in 2017.

Sign up to be among the first to know when new exhibitions by Justin Caguiat or at Taka Ishii Gallery open.
Sign UpLogin