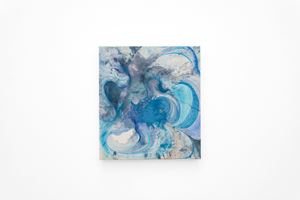 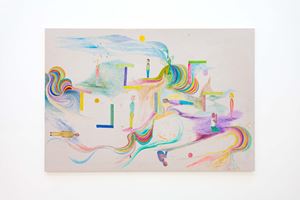 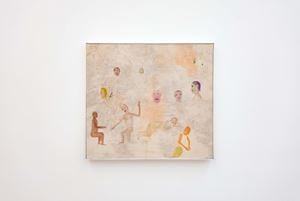 Chris JohansonPortland, San Jose, The Self, and Others, 2020–2021Acrylic on canvas with reclaimed timber frame
63.6 x 70.5 x 3.5 cm The Modern Institute Contact Gallery 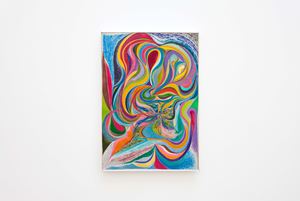 Like many this year, I was in personal confinement on the west coast in Oregon, with some short stints in very isolated California amidst the virus, protests, the creeping bleakness of the White House, and the unhealthy air from the fires navigating the grocery stores—alongside all the cancelled work that comes with the current situation of the world. All the while, my rescheduled show at The Modern Institute was approaching.

My mind, like many reading this, has been affected by the strangeness of these times. The equation of having an art show was glitching my thinking. I have been making these canvases in a deliberately measured and quiet way to slow down my thoughts, to reduce the noise of my life. Using less paint on raw, used canvas that I have found, is a process of making art I've employed for the last three years. This would have been the exhibit I'd likely have presented had the strangeness of now hadn't permeated my Self. These pieces are in a way 'meditation paintings' where I am trying, calmly, to visualise and process the impermanence and fluid weight of being. I don't know if I articulate this, but it is what I am thinking about.

I am glitching and hustling to figure out how to make this year work out better than worse, and that is what these tables are about: this is documentation and diary of some of my personal experiences that kept me busy during this weird ass year. Examples of such are shared through photographs, sketches, watercolours, posters, prints and a piece of multi-coloured cement - the materials speak of projects both personal and others that involve working with various institutions or organisations.

At the entrance, there is a wall one has to walk around to enter the space: the face is covered in tinfoil, and located directly behind that are plastic containers, each of which have different amounts of water; behind that, a bundle of sage that is burnt a little every day. What these have in common are that people create and use these materials ritualistically for wellbeing, in the same way that others pray. Some might call it magic. Towards the back of the space there is a painting on paper placed on the ground, held at each corner by different materials: what could I want to say by doing this?

To accompany the exhibit there is a little booklet with an essay on my work and the show by Corrina Peipon, and a story by Jon Raymond. It also has some of my expanded thoughts on the show. This edition is designed, edited, published by Good Press in association with The Modern Institute. My thanks to the following for allowing the prints, photos and documentation to be included in this exhibit and publication: Martin Luther King Jr. school and KSMOCA; the third grade students for designing sculpture furniture; Harrell Fletcher, Lisa Jarrett, Paige Thomas at School; Du-Good Press; Los Angeles County Metropolitan Transportation Authority; Intisar Abioto for photography, and Ajax Oakford for teaming up with me to fabricate them; and Toby Hardman, Rick Johanson, and Travis Souza for installing these heavy pieces); and Vans for funding the project. Thanks Ajax Oakford and Johanna Jackson for collaboratively building house in Santa Monica mountains.

The Modern Institute presents a new body of acrylic works on paper and canvas by artist and musician Chris Johanson. Comprising of scenes and abstracted forms, Johanson's works addresses thoughts of an existential nature, and reflect the experience of our current times. Incorporating leading and probing texts within the charged imagery, Johanson encourages the viewer to query what is presented, and to consider the parallels in our lives. His treatment of such scenes and the starkness in which the details are presented suggest fragments of recollection, or documentation of activities of the past year.

Phrases like 'Who Knows', 'Occupy Time' and the placement of words seen in And, While all allude to the uncertainty and sense of waiting pervading the global community. In Remember, two figures on scooters in the centre of a hazy blue setting conjure a nostalgia for a care-free normality that now seems alien in contrast to the masked figures in spaced seating depicted in (LA Metro Silver Linings Public Art Project drawing #6) that is now ubiquitous. First And Foremost, This Is A Person features a solitary figure clad in black, kneeling with both arms in the air, indisputably brings to mind recent headlines. In most of the paper works, there is an urgency in its execution, capturing only the key details of the overall scene to convey particular moments and emotions.

Other works depict multi-coloured swirling compositions that push, curl and pool in dynamic movement, enticing viewers to lose themselves in the dense colour and flow—perhaps a reprieve from the reality Johanson reminds us. The approach to colour and pattern we see in the upper half of The Self (With Riddle) is notably different from the vibrancy of the canvas abstractions, featuring repeated stripes of sombre colours floating above a lying figure as thoughts of anxiety derived from the pandemic are expressed. In spite of the apprehensions evinced in this new series, Johanson's technique and comic style paired with his wry observations suggest an optimism and encouragement to find calm and humour within the current chaos and uncertainty.

Johanson has previously presented in the 4th Berlin Biennale (2006); the 2005 Istanbul Biennial; and the 2002 Whitney Biennial, Whitney Museum of American Art, New York.

Subject Matter, Unblivion, Peace Train of Thought, How I Figured Out How To Have A Show In 2021

Sign up to be among the first to know when new exhibitions by Chris Johanson or at The Modern Institute open.