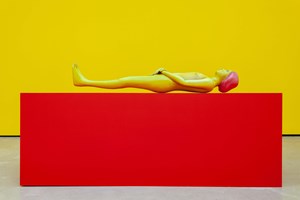 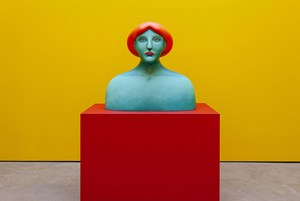 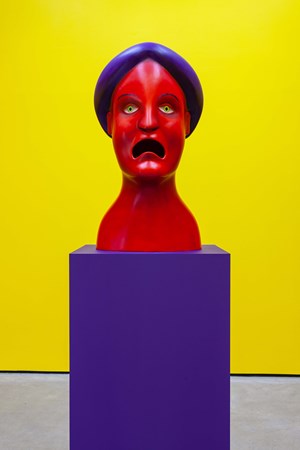 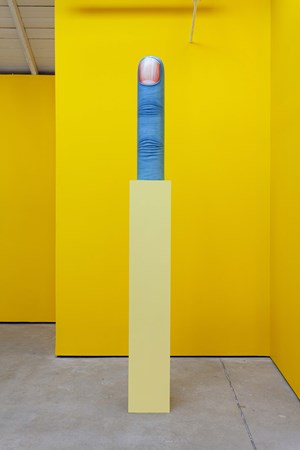 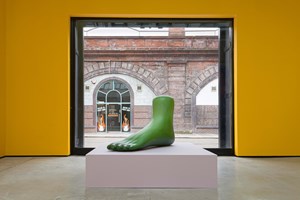 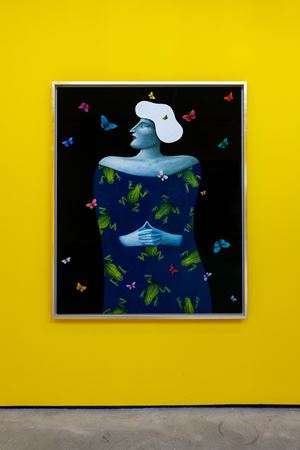 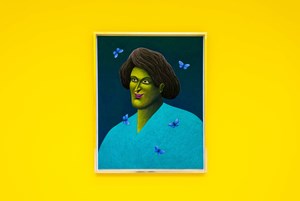 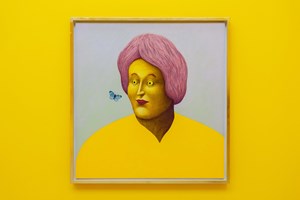 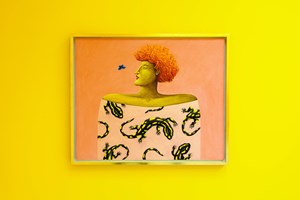 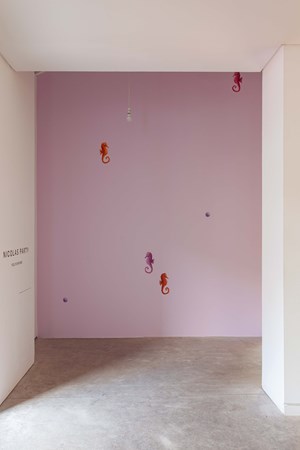 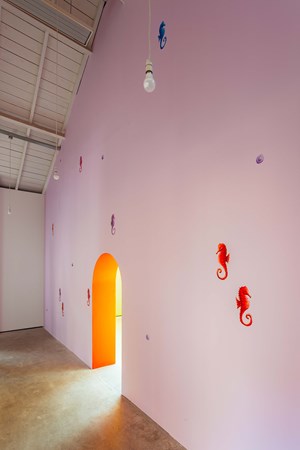 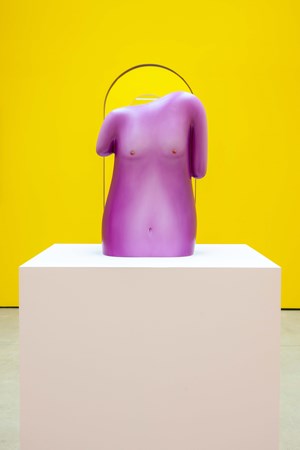 For his fourth solo exhibition at The Modern Institute, New York-based artist Nicolas Party will divide the gallery’s Osborne Street space, into three uniquely crafted interiors. Linked by arched doorways of incremental height, each of the spaces will offer backdrops for a complex and surreal body of new sculptural works and pastels on canvas.

Entering through an initial, unusually low entrance, one encounters four painted portraits hung across the three rooms. Tender and skillfully rendered in soft pastel, Party’s characters are animated as if teased by a butterfly or two invading their frame–this passage of characters culminates in the final room as a grandiose figure stands–its patterned robe of frogs engulfed by a flutter of butterflies. The dust of Party’s pastel line replicates the scaled pigmentation of butterfly wings–their fragile surface similarly vulnerable to the touch. Indeed, the leitmotifs of butterflies, frogs and seahorses, throughout the exhibition, symbolize the creatures’ ability to alter their physical appearance–whether through the protective necessity of camouflage or expressive display of intention and emotion.

Displayed alongside the works on canvas is an entirely new body of sculptures, conceived for the exhibition and mounted on painted plinths. Party’s busts, figures, and other anatomical elements echo classical sculptural tropes, but with the caveat of Party’s disrupting interventions, create a sense of the artist’s own unique world. A slumping purple torso greets the viewer at first entrance; whilst in the middle room, a still, horizontal figure painted an intense amber references gisant, a sepulchral tomb effigy common in the Middle Ages and continuing into the Renaissance, depicting its recumbent subjects in an eternal state of repose.

Continuing this discernible relationship to antiquity, Party’s new sculptures revitalise their classical reference through a truly modern means of production. 3D rendered and CNC milled from wood, Party then hand paints their surface–as if applying a skin or make-up–the traditional application of paint disguising their digital conception. Indeed, through this method of production Party is able to create sleek sculptural forms that share the smooth, tactile surfaces of his pastel portraits.

These new sculptural forms are also in direct reference to Party’s interest in Polychrome–the decorative practice, first found in Ancient Greece, of painting sculptures—most often wooden and marble—in a variety of colours, whilst the busts evoke the aesthetic silhouettes of ancient Egyptian statues. Party’s objects also address the often excluded history of colour in sculpture, such as marble sculptures frequently and misleadingly perceived as white. The way we encounter these artifacts shapes our aesthetic and social impressions of the period, disregarding the importance of polychromy and the vivid colours applied to these forms and thus an accurate portrayal of those times.

Party’s practice is heavily steeped in his fascination with art history and near-constant consumption of it. Classical themes in painting—portraiture, still lives and landscapes amongst others—are translated into Party’s signature aesthetic language onto canvas using his preferred medium of pastel, and most recently, in the new body of sculptural works. This familiarity of subject matter is disturbed by a tangible uncanniness in his work–whilst one may recognise the motif, his forms remain resistant to categorisation–their corporeality existing only in the realm of Party’s vast imagination.

Sign up to be among the first to know when new exhibitions by Nicolas Party or at The Modern Institute open.