'The supreme goodness is like water which favours everything and doesn't compete with anything ...

Because it doesn't compete with anything, it is irreproachable.'

Tina Kim Gallery is pleased to present its first solo exhibition of Kim Tschang-Yeul (b. 1929), on view from October 24, 2019 through Januray 25, 2020. The exhibition focuses on Kim's early bodies of work from the late 1960s to early 1980s, surveying the evolution of the artist's signature painting style when he lived between New York and Paris.

Born in 1929 in Maengsan in North Korea, Kim Tschang-Yeul spent his childhood amid the turmoil of the Korean War and postcolonial liberation. He later fled to South Korea as the North saw a dramatic rise in Communist influence. After studying painting at the Seoul National University, Kim established the Modern Artists' Association—later renamed as Actuel—in 1958. He joined Korea's Art Informel movement that same year along with a group of avant-garde artists including renowned Dansaekhwa masters Park Seo-Bo and Chung Sang-Hwa. As one of the first generations of Korean modernist painters, Kim participated in the Paris Biennale in 1961 and the São Paulo Biennale in 1965. These exhibitions opened the door for the artist to embark on his artistic career abroad that would span more than 40 years.

When Kim Tschang-Yeul moved to New York in 1965, Pop Art prevailed as the artistic lifeblood of the city. Following a recommendation by his teacher, Kim Whanki, Kim received a scholarship from the Rockefeller Foundation to study at the Art Students League of New York. During this time, Kim became acquainted with the artist Nam June Paik who later supported Kim's participation in the Avant-Garde Festival in 1969. It was in New York that Kim began his earliest experiments into painting the bulbous abstract forms that would later lead to his signature style. It was during this time that the artist began experimenting with visceral abstraction, depicting colourful spherical forms which the artist aptly called 'paintings of the intestines.'

In 1968, Kim relocated to Paris and began his artistic career anew traveling between France and South Korea, creating a bridge between Europe and his native land. Hosting Dansaekhwa masters such as Lee Ufan, Park Seo-Bo and Chung Sang-Hwa in his St. Germain studio, Kim became a figure of global success to painters back home.

Drawing from the Pop Art and Minimalism he encountered in New York, Kim continued his study of pure abstraction until 1969, at which point he began producing globular, phlegmatic forms that appear to ooze out through the canvas, as in the painting Untitled (1971). The following year, the artist unveiled a painting of a magnified single drop of water in the first exhibition at Salon de Mai in Paris, France. It was Kim's ability to navigate between diverse modes of abstraction, minimalism, and photorealism that led him to settle into this motif that he would continue to pursue to this day.

Spanning the early 1970s to present day, Kim Tschang-Yeul devoted his career to a single optical device that allowed him to confront the dichotomy between nature and contemporary culture: the drop of water. As Kim explained, 'The act of painting water drops is to dissolve all things within [these], to return to a transparent state of "nothingness." By returning anger, anxiety, fear, and everything else to 'emptiness,' we experience peace and contentment. While some seek the enhancement of "ego," I aim toward the extinction of the ego and look for the method of expressing it.'

The artist paints the drops themselves with an exactness that leads the viewer to question their own vision or the act of seeing. Their hyperrealism at first glance instills a desire to touch the canvas, tricking the eye in the style of Op-Art. One notes though that the beads find their form not in the depiction of the water, but in their implied surroundings and the optical effects they generate. Kim himself, through his continuous return to water, finds his identity as an artist and an expatriate through his circumstances as the drops find theirs through light and shadow. He explores the complex dualities within a single form: water as a gentle, life-giving element but one that has the power to destroy and erode; the liquid drops having condensed from an invisible gaseous state and destined to return to said state once again as part of an endless cycle, as can be witnessed in Untitled (1973). In an essay on the artist's work, Lee Ufan noted 'it is symbolic to say that in painting water drops Kim does not paint them as an existential phenomenon, but treats them as an event of "light." [...] Perhaps being and non-being are but a directional play of light and shadow.'

In displaying several historic works by Kim Tschang-Yeul, this exhibition at Tina Kim Gallery showcases and traces the artist's path to settling on the motif that would occupy his entire four-decade-long career. Additionally, it contextualizes the works as self-portraits in which the artist encapsulates and analyses the psychological and emotional consequences of civil war and displacement. 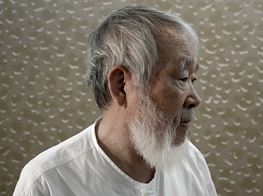 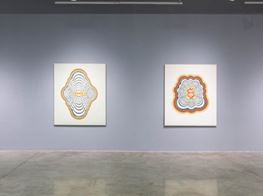 Kim Tschang-Yeul (b. 1929), a towering figure of Korean modern art, is best known for his trompe l'oeil depictions of pristine water drops beaded on either a monochromatic surface or raw linen. As Kim Tschang-Yeul: New York to Paris, at Tina Kim, underscores, it was while living he was living in New York that his work began to change, leading...

Sign up to be among the first to know when new exhibitions by Kim Tschang-Yeul or at Tina Kim Gallery open.
Sign UpLogin