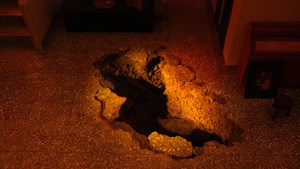 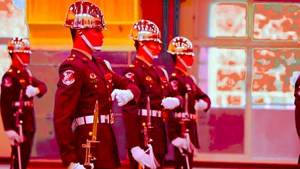 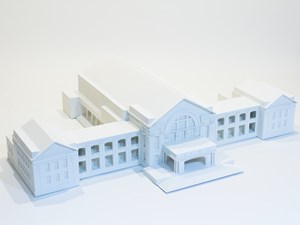 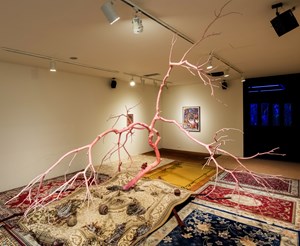 The childhood home of Kuo Yu-Ping's is one that extends endlessly in her consciousness. Scorching heat and unbearably intense melancholy are always present in her representation of memories of home. How Real Is Yesterday, her first solo exhibition at the TKG+ Projects, inquires into Kuo's previous body of work through a subtle and complex narrative that revolves around her idea of home. The entire exhibition space embodies her inner landscape, like a park in a dream where each work softly whispers. Double Reading (2019), a video work shot on site at the space, attempts to excavate what lies deep within the artist's subconscious via images of once-present honour guards, eliciting an inexplicable, haunting state of self-censorship.

Upon her father's retirement, Kuo and her family left the Zhongxing New Village in Nantou, Taiwan, where she grew up. Stirring a deep attachment to objects and light in her old home, her departure inspired her to search for her roots through art making. In Delay and Pit (2013), memory as an analytic approach of inquiry is used not only for the quest for her identity, but also for the investigation on how structural changes in politics cast an influence on local developments in the course of modernization. The Zhongxing New Village is a delayed projection of KMT's then 'Nanjing Capital Project' back in China. The policy of 'infrastructure first' results in significant insufficiency in all other aspects, such as a deserted cultural scene. A new work Is Waking Up (2019), on the other hand, can be considered a hybrid representation of Kuo's memories—pouring rain and a sewage system with wastewater running through, on top of which stands the Zhongxing Auditorium, an architecture of the 50s that looks like a bomber aircraft from a bird's eye view. It is an allegory of modernity telling the story of a lost plane. It is, too, the artist's spatial memory of her hometown. Encircled by wooden walls yet present in the exhibition space, the enormous object's ostensible invisibility closely corresponds to the artist's state of mind.

Starting in 2016, Kuo began dismantling a piece of carpet in an extremely prolonged, self- torturing, and neurotic manner. Through repetitive and almost ritualistic manual labour, she carefully pulled the threads apart, loosened the wool, and turned them into numerous solid pom-poms. Over time, her body developed a movement pattern most efficient for the task. She could stay in the same position for hours with both arms being the only body parts that frantically moved. It is as if the whole body was isolated in a vacuum, without growing or ageing. Continuing the trajectory of Kuo's artistic practice, this piece of carpet, as an object echoing the motif of ceaseless labour, is part of the sound installation Sleep, Dream, in a Feverish Land (2018). The work attempts to capture the essence of human existence — perpetually engaged in activities of sleeping, eating, and laboring (both physically and mentally). The sound of dismantling carpet, of eating and sleeping, of emotional fluctuations, portrays the never-ending repetition in human life.

In the space with a whole wall of floor-to-ceiling windows, an ambivalent, unsettled sphere like that of the artist's inner world is invoked. The installations in the exhibition represent the manifold states of the mind while spurring complex dialectical discussions, readily viewed as Kuo's memorandum on her investigation of what reality is.

How Real is Yesterday 昨日有多真實

Sign up to be among the first to know when new exhibitions by Yu-Ping Kuo or at TKG+ Projects open.