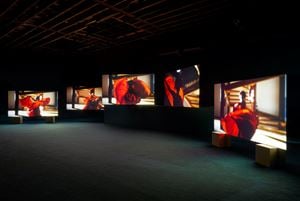 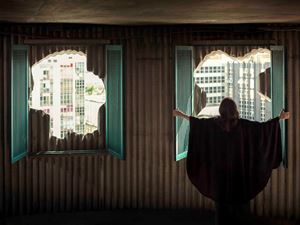 Isaac Julien's nine-screen installation, premiering at Victoria Miro, traverses a collection of Lina Bo Bardi's most iconic buildings, offering a meditation on the iconic work and on the legacy of the visionary modernist architect and designer (1914–1992).

'Linear time is a western invention; time is not linear, it is a marvellous entanglement, where at any moment points can be chosen and solutions invented without beginning or end.'–Lina Bo Bardi1

Having filmed on location in São Paulo Museum of Art (MASP), SESC Pompéia and in the Teatro Oficina, Julien proposes an open-ended reflection on Lina Bo Bardi's architecture and her approach to Brazilian culture. These three buildings, widely regarded as landmarks of Brazilian modernism, stand as representative of Lina Bo Bardi's groundbreaking ideas. Travelling further north, the work also encounters Bo Bardi's buildings in Salvador: the Museum of Modern Art, Bahia; the Coaty Restaurant and the Gergório de Matos theatre.

Starring the acclaimed Brazilian actresses Fernanda Montenegro and her daughter Fernanda Torres, A Marvellous Entanglement portrays Bo Bardi at different stages of her life, as Montenegro and Torres recite texts closely adapted from the architect's writings.

A central figure of Latin American modernist architecture, Lina Bo Bardi devoted her working life to promoting the social and cultural potential of art, architecture and design. Exploring these themes, A Marvellous Entanglement establishes Bo Bardi's iconic staircase, which she designed for the Museum of Modern Art, Bahia, as the stage upon which Julien orchestrates an original work by choreographer Zebrinha and performed by the Balé Folclórico de Bahia. The Coaty, a modern ruin perched on the Ladeira de Misericordia in Salvador, accommodates in turn a series of performances by Brazilian art collective Araka. In close collaboration with Julien, the collective performs in situ happenings reflecting upon the significance of Bo Bardi's seldom-accessed masterpiece for a young contemporary audience.

Bo Bardi graduated from the Facoltà di Architettura in Rome just before the outbreak of the Second World War, and shortly after that she became editor of Domus magazine-the architect used to say she started her career at a time when nothing would be built, only destroyed. After the war, Bo Bardi married Pietro Maria Bardi and the couple moved to Brazil. There she would find elements that permanently changed her professional life and world view. Travelling to the Northeast hinterlands, a region blighted by droughts and poverty, Bo Bardi was compelled to bring the creative spirit of Brazilian folk cultures into her sophisticated, prolific practice. Through building, furniture, jewellery and stage design, as well as a powerful theoretical approach, Bo Bardi was able to bring high culture to the masses and cultural awareness to the elites.

Inspired by both official and anecdotal stories about Bo Bardi's life and work, the film is shot across seven buildings designed by the architect; four in Salvador in Brazil's northeast region of Bahia, three in São Paulo. Each becomes a locus for a performance, intervention, enactment or reinvention of scenes that have shaped the history of, and the legends around, her architecture. Full of visual echoes and alliterations, the film focuses on key structural elements of Bo Bardi's designs: staircases, windows and walls opening on to cityscapes, nature or the sea; details of construction; public spaces designed for social interaction. It also reveals the perilous condition of many of Bo Bardi's masterworks, especially those in Salvador, and the pressing need for their conservation. In a country where a fragile democracy tries to survive after a dictatorship that lasted 21 years, Julien looks at Bo Bardi as a character whose voice can still shed light on issues that are as pertinent today as they were during her lifetime.

Following the conceptual thread which led to artistic investigations around portrait making such as Ten Thousand Waves (2010), or the more recent Lessons of the Hour (2019), Lina Bo Bardi - A Marvellous Entanglement looks at historical reparation through visual poetry, moved by the breadth and poetry of Bo Bardi's work, and a profound belief that her legacy has yet to be fully acknowledged.

Born in 1960, Isaac Julien lives and works in London. Solo exhibitions of his work have been held at institutional venues including ARoS Aarhus Kunstmuseum, Denmark (2018), The Whitworth, Manchester (2018), The Royal Ontario Museum, Toronto (2017), MAC Niterói, Rio de Janeiro, Brazil (2016), MUAC (Museo Universitario Arte Contemporáneo), Mexico City (2016); the De Pont Museum, Netherlands (2015); Museum of Modern Art, New York (2013), Art Institute of Chicago (2013), Museum of Contemporary Art, San Diego (2012), Nasjonalmuseet, Oslo (2012), Bass Museum, Miami, Florida, USA (2010), Museum Brandhorst, Munich (2009), Museu Nacional de Arte Contemporânea - Museu do Chiado, Lisbon, Portugal (2008), Kestnergesellschaft Hanover (2006), Pompidou Centre Paris (2005), and MoCA Miami (2005). He has exhibited at biennials including the 56th International Exhibition of Contemporary Art - La Biennale de Venezia (2015), Johannesburg Biennale (2012), Moscow Biennale of Contemporary Art (2011), Shanghai Biennale (2010). Julien was the recipient of The Royal Academy of Arts Charles Wollaston Award 2017. He was appointed a Commander of the Order of the British Empire (CBE) for services to the Arts in the Queen's Birthday 2017 Honours List. In 2019, Isaac Julien was appointed to the faculty of the University of California, Santa Cruz. Julien and independent curator and writer Mark Nash, the former head of contemporary art at the Royal College of Art in London, will work together on developing the Isaac Julien Lab at the UC Santa Cruz campus, which will provide students with the opportunity to assist Julien and Nash with project research and the production of moving-image and photographic works in California and London.

****Lina Bo Bardi was born Achillina Bo in Rome in 1914. After studying architecture in the city she moved to Milan, setting up her own studio in 1942, aged just 28. Her nascent career interrupted by war (her studio was destroyed by aerial bombing in 1943), she moved from Italy to São Paulo in 1946, quickly re-establishing her practice and co-founding with her husband, the writer, curator and collector Pietro Maria Bardi, the influential art magazine Habitat, and later becoming the editor of Domus. Bo Bardi's work is characterised by the integration of the values of the Modernism with those of Brazilian popular culture and its pluralist identity. She applied construction techniques learned from local craftsmen to her designs, which include iconic buildings such as São Paulo Museum of Art (MASP), Museu de Arte da Bahia (MAM-BA) and SESC Pompéia, widely considered to be her masterpiece. In addition, she was a noted editor, illustrator and curator, a designer of jewellery and creator of set designs and costumes for experimental film and theatre. She died in 1992. Posthumous exhibitions dedicated Bo Bardi's work include the major touring exhibition Lina Bo Bardi: Together, organised by the British Council in 2012. In 2014, a Google Doodle commemorated what would have been Lina Bo Bardi's hundredth birthday. 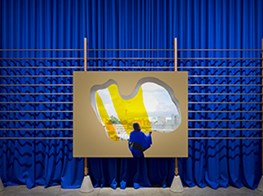 In a darkened room flashes of looming concrete walls and extruded limbs – serial images of Lina Bo Bardi's SESC Pompéia art and leisure centre in São Paulo – pulse to a score by the German-Spanish composer Maria de Alvear. The artist and filmmaker Isaac Julien and his editor Adam Finch – the room is part of Julien's David Adjaye-designed studio...

Sign up to be among the first to know when new exhibitions by Isaac Julien or at Victoria Miro open.