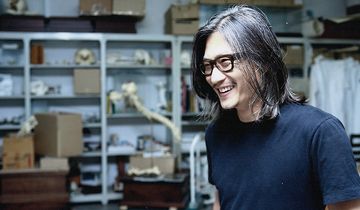 Hyungkoo Lee graduated from Seoul's Hongik University in 1998, after which he went on to receive an MFA from the School of Arts, Yale University, in 2002. Many of Hyungkoo's artworks produced between this period appeared in The Objectuals, his first major solo exhibition at Sungkok Art Museum, Seoul, in 2004. On view were a range of his optical instruments, from the wearable A Device (Gauntlet1) that Makes My Hand Bigger (1999), which enlarges the wearer's hand and fingers, to the prints showing models donning transparent helmets that multiply the number of their eyes to eight (8E-P, 2002) or blow the mouth out of proportion (Altering Features with BH3, 2003).

The pseudo-scientific nature of Lee's artworks is perhaps best reflected in 'Animatus' (2005–7), a series of fabricated fossils of famous cartoon characters. In order to construct the skeletons of Bugs Bunny (Lepus Animatus, 2005–6) or Tom and Jerry (Felis Catus Animatus & Mus Animatus, 2006–7), Lee carefully studied animal anatomy and the characters' external designs. The sculptures, which are all made by hand, are products of negotiation between science and cartoonish exaggerations. In an interview with Ocula Magazine in 2019, the artist notes some of the considerations he had, such as the characters' simplified number of fingers and toes and disproportionately huge eyes.

Lee's exploration of the human body includes the relationship between senses and movements. As he reflected in his 2019 Ocula Conversation, this interest was inspired by finding himself in a new, culturally different environment when studying abroad, where he felt that 'I needed to readjust my senses through learning or repetitive training'. With the aid of A Device for Walking Backwards (2001), an antennae-like gadget with mirror on either side for an access to the hind vision, Lee learned to walk and, later, run backwards. His engagement with unfamiliar perspectives can also be seen in the single-channel video Measure (2014), which shows him wearing a belt with a pair of horse attached to it (Instrument 01, 2014), and evaluating the movements of a horse and rider at a dressage competition.

In other works, the skeleton becomes fluid, abstract objects. The large-scale installation Kiamkoysek (2018), for example, consists of bone parts hanging from the ceiling or arranged on the floor, hinting at the remains of an ancient, gigantic creature or an abstracted landscape. To add to the ambiguity, Hyungkoo Lee derived the title from a Korean word for 'oddly shaped rocks and stones' and wrote it phonetically according to the Yale romanisation system, which made the resulting word—Kiamkoysek—unfamiliar even to native Korean speakers. Similarly, X (2019)—an installation presented at Lee's solo exhibition Penetrale at P21, Seoul, in 2019—shows skeleton-like fragments affixed onto a three-dimensional grid, accompanied by small spheres and arrows, evoking an unknown universe.

Hyungkoo Lee discusses his uncanny investigations of the body and its mechanisms, a collection of which will be on view at P21 in Seoul for the artist's solo show, PENETRALE.