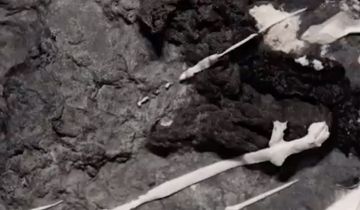 Jason Martin is a contemporary British artist known for his monochromatic abstract paintings and mixed-media works that engage with a range of materials and techniques to explore the physical properties of the medium of paint in contemporary art.

After training at Goldsmiths, University of London, in the early 1990s, Martin developed diverse methods of manipulating paint including dragging, scraping, squeegeeing, or combing pigment across different supports. The resulting paintings—often monochromatic and evocative of post-Minimalism or Colour Field Painting—feature irregular surfaces that create a sense of movement. In Lover (1997), for example, red oil paint spreads horizontally on a sheet of Perspex, its soft undulating lines suggesting motion, while the sweeping and wavy strokes in Detox (1999) form an alternating pattern of upright and upturned triangles.

While Martin's paintings are abstract, the shadows created by the hardened lines of his brushstrokes or marks add a sense of dimension to his artwork and evoke landscapes. In Fantasia (2003)—a square oil painting on aluminium—dark turquoise lines rise and fall to hint at mountain ridges or ocean topography. Vertigo (2006)—a monumental oil painting also on aluminium—consists of soft and feathery undulations that recall a curtain or waves. In an interview with The Spaces in 2016, the artist acknowledged the intertwined relationship of abstraction to figuration in his work, saying, 'I've always viewed myself as a landscape painter dressed up as an abstractionist.'

After nearly two decades of painting in oil, Martin took a three-year hiatus from the medium in 2013 to redefine his goals for it. During this period, he worked in mixed media, including metal-cast sculptures. In the solo show Painting as Sculpture at Lisson Gallery, Milan, in 2013, the artist presented a series of small nickel- and copper-cast works that capture the thickness, volume, and texture of globules of paint on a smooth surface. In Cabo (2013), the small particles captured in the texture of paint contrast with the smooth exterior of the support surface, while Sloe (2013) features sweeping strokes seemingly cascading down in nickel from the upper-left corner. The exhibition also included a stainless steel sculpture, titled Anathema (2013) and shaped like a meteorite or a seedpod, with a rough and gnarled exterior.

When he returned to oil painting in 2016, Martin simplified his approach, moving away from large paintbrushes to work with smaller hand-held brushes. More recent paintings commonly depict horizontal bands that are uneven in surface and line (a product of painting with smaller brushes), and are titled after the colours the artist used. Untitled (Davy's Grey / Ivory Black) (2016), for example, shows bands of dark grey on a background of bluish grey. The top and bottom of the canvas has been smoothed, contrasting the rugged surface in the middle.

Martin continues to evolve his practice by experimenting with new materials. For his solo exhibition Meta physical at STPI, Singapore (23 March–4 May 2019), he employed embossed relief, paper pulp, and paper casting techniques to create artworks that are rich in texture. In the relief print First in last (2018), for example, the small intricate marks made by a rotary device only become visible up close; from a distance, the work appears to be a monochromatic painting in red with erratic lines across it. Currently, the artist's solo show at Lisson Gallery in London (Long Way Home, 15 May–22 June 2019) features paintings made with a new type of oil paint containing graphite. A product of collaboration with the paint manufacturer Old Holland, the 'Jason Graphite Grey' and 'Jason Graphite Grey Deep' lend paintings a slight metallic finish.

Martin lives and works in London and Portugal.

View More Ocula Insight ‘Jason Martin: Meta physical’ at STPI By Ocula IGTV British artist [Jason Martin][0]'s solo exhibition [Meta physical][1] [(23 March–4 May 2019)][1] at [STPI][2] in [Singapore][3] was the result of his residency at the Institute, during which he exp