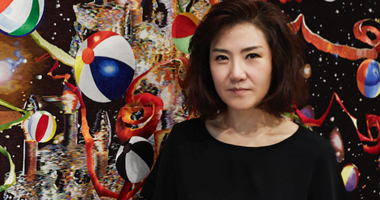 Kyungah Ham works across installation, video, performance and traditional media. The legacy of war is a recurring motif in Kyungah Ham's art, in particular the division of the Korean peninsula and related government propaganda. Ham's paintings and sculptures often conceal political messages, which may initially be eclipsed by the colourful and luscious style in which they are rendered. Ham enacts a dialogue that extends across the barriers of ideology and physical distance that mark South Korea relations with its northern neighbour. Ham's work reflects both historical and contemporary episodes of conflict, and construct a strange and compelling mixture of propaganda, social activism, and personal memory.

Ongoing since 2012, the Real DMZ Project interrogates the demilitarised zone (DMZ) between North and South Korea through annual, research-based exhibitions that bring together the works of Korean and

If politics, systems, and rules are based on some sort of ideology, I think that art is something that lies on the edge where it can transcend, translate, and express one's experience.

Since 2008, Korean artist Kyungah Ham has worked on a series of massive embroidery pieces with collaborators she's never met. Ham, born in 1966, works with intermediaries to smuggle her designs from S

Artist Kyungah Ham's colorful image grabs the eyes of visitors to the 10th Taipei Biennial held at the Taipei Fine Arts Museum in Taiwan. At first glance, they just look like bright-colored abstract patterns, but when examined closely, the canvas is jam-packed with woven stitches in various colors, constituting an elaborate embroidery design....

There has been an age-long controversy over whether art can be graded and rated, but prestigious art awards across the globe hint at what is going on in contemporary art and what artists are doing. In Korea, the Korea Artist Prize (KAP), currently ongoing at the National Museum of Modern and Contemporary Art (MMCA) Seoul, plays this role. This...

The National Museum of Modern and Contemporary Art (MMCA) in Seoul, in cooperation with the SBS Culture Foundation, has recently launched the Korea Artist Prize 2016 exhibition, which will run until January 15, 2017. MMCA’s flagship exhibition is showcasing the four finalists of the Prize, namely Kim Eull, Back Seung Woo, Ham Kyungah...

Ham Kyung-Ah (b. 1966) is an artist who tenaciously delves into the crevice of contradiction and irrationality while challenging the rules and taboos of the system hidden within the solid shell of reality. Her work occasionally initiates from spontaneous ideas and later completed with long-term time, labor and cost. Ham blindly follows people in...

Be among the first to know when new artworks and exhibitions by Kyungah Ham are added to Ocula.
Sign UpLogin