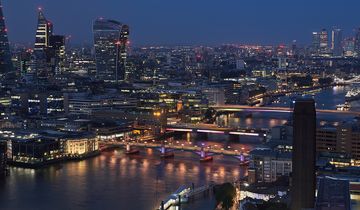 Born in 1967 in Albuquerque, New Mexico, Villareal studied at Yale University, graduating with a BA in 1990 before graduating again in 1994 with an MPS from the Interactive Telecommunications Program at New York University's Tisch School of the Arts. The latter programme, and initial research with virtual reality, gave Villareal skills that have been crucial to his ongoing practice.

Leo Villareal's pathway to the electronic light-based artworks that have defined his career started in the middle of Black Rock Desert, Nevada, in the mid-1990s at the famous Burning Man Festival. Responding practically to the challenges of returning to his campsite in the darkness and confusion of the event each year, the artist built an array of 16 strobe lights with a microcontroller programmed to turn them on and off acting as a guiding beacon.

Discovering the emotive and artistic potential of his technological expertise and art background, Villareal began to work on more complex combinations of computer programming, light, space, site, and time based on what his early prototype had revealed. In 2002 the artist presented his first fully conceived LED artwork, Double Hexad (2002), at the Palm Beach Institute of Contemporary Art's Sculpture Now exhibition in Florida.

Double Hexad—a roundel comprised of LEDs behind opaque Plexiglas—presents many of the core features that have defined the artist's practice. While strongly rooted in abstraction it evokes universally familiar human sensations conveyed by combinations of colour, light, and movement.

In 2010 the San Jose Museum of Art held the first survey exhibition of Villareal's work, presenting the fruits of his decade-long experimentation with patterns of light in time and space. The exhibition highlighted the rapid growth in scale and complexity of his mesmerizing works. Although visually distinct, these artworks, like the new pieces in Pace Gallery's solo exhibition of the artist in London (22 November 2019–18 January 2020), demonstrate the artist's consistent practically and philosophically minimalist approach. This approach focuses on the function of underlying structures and rules, and how they govern the whole, by looking to the lowest common denominators in the system: the 0s and 1s of complex binary code, and the pixels of light that make an image.

The precise form and movement of Villareal's artworks are not pre-planned in the programming stage. Rather, within the established parameters of scale, speed, and opacity set by algorithms in the artist's custom-made software, the work develops organically. The behavior of the individual particles simulated by the LEDs unexpectedly creates nonrepeating patterns that develop by chance. The resulting works are not a contained sequence on a loop; instead, they are an open-ended and subjective experience for the viewer. What the viewer sees will not be repeated, making each encounter unique.

These qualities, aesthetically and intellectually accessible to a broad spectrum of audiences, may account for Villareal's rapid emergence on the international art scene. From Diagonal Grid (2007) for the Borusan Center for Culture and Arts in Istanbul, Turkey, to Light Matrix (2016) for the Auckland Theatre Company in New Zealand, Leo Villareal has created major installations across the globe.

Over the past decade, Leo Villareal has increasingly worked on public projects that activate civic and institutional landmarks. In 2012 Villareal was commissioned to create a site-specific light installation at Cornell University's Johnson Museum of Art, New York, in honour of the late astronomy professor Carl Sagan. The resulting work, Cosmos (2012), consists of 12,000 LEDs affixed to the ceiling of the Malin sculpture, running a computer-programmed pattern of dazzling, swirling, and shifting constellations, day and night. In 2013 he completed the installation of The Bay Lights, a 1.8-mile-long, now permanently installed array of 25,000 white LED lights adorning San Francisco's Bay Bridge.

For the ongoing 'Illuminated River Project' (2016–2022) Leo Villareal has returned to working with iconic bridges. His artistic vision to illuminate the 15 bridges across the Thames in London was selected by the Illuminated River Foundation in 2016. Each of Villareal's light installation designs, implemented step by step each year, reacts to the atmosphere of the site—the motion of the water, the colours at different times of the day, and the movement of traffic—as well as the long legacy of artworks the river Thames has inspired by artists like Monet and Whistler.

Alongside a growing international list of public projects, Leo Villareal's works have featured in group and solo exhibitions around the world. His works can be found in the permanent collections of prominent institutions such as The Museum of Modern Art, New York; Brooklyn Museum; Arario Museum, Seoul; IFEMA, Madrid; Naoshima Contemporary Art Museum, Kagawa, Japan; Time Warner Centre, New York; and the National Gallery of Art, Washington. Leo Villareal is also on the board of Burning Man Network.

Boasting its own gallery in Marfa, Texas, Art Blocks has been as eager to embrace the contemporary art world as Pace has to promote NFTs. Their first collaboration is a series of oil slicks by John Gerrard.

Artworks from another U.S. festival, Burning Man, are traveling to England's Chatsworth House this month.

Sign up to be notified when new artworks and exhibitions by Leo Villareal are added to Ocula.
Sign Up Login