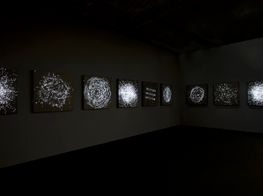 Five more London bridges will soon be lit up as part of the Illuminated River project. Using LED lighting designed by American artist Leo Villareal, the project aims to visually connect the city's iconic bridges through subtle lighting sequences and colour schemes conceived to showcase the architecture and history of each bridge.

The latest bridges to be announced are the Westminster Bridge and Lambeth Bridge. From next month, Westminster Bridge's latticework will be illuminated with soft green hues, evoking the green benches of the House of Commons' debating chamber, while Lambeth Bridge's red glow will reflect the red benches of the chamber in the nearby House of Lords. The lighting designs extend the theme in the paintwork of both bridges, which has long symbolised Britain's two-chamber parliamentary system.

'The illumination of Westminster and Lambeth bridges [will bring] a fresh new spirit and atmosphere to the political centre of London that will transform this part of the Thames as we begin, gradually, to ease out of the challenges of the last 12 months,' said Lord Neil Mendoza, Chair of the Illuminated River Foundation.

The Blackfriars Road, Waterloo, and Golden Jubilee bridges will also be lit up next month, bringing the total number of bridges illuminated through the project to nine. The first four bridges—London, Cannon Street, Southwark, and Millennium—were lit up in 2019.

Villareal created designs for 15 bridges on the Thames in his winning proposal, submitted in partnership with architects Lifschutz Davidson Sandilands, for the Illu­min­ated River Inter­na­tion­al Design Com­pet­i­tion, which launched in June 2016. The Illuminated River Foundation says the project is now complete, but there is capacity to expand it 'on a bridge-by-bridge basis'.

Adding up each side of all the bridges in the project gives a total length of five kilometres, which the Illuminated River Foundation claims makes it 'the longest public art commission in the world'.

Aside from seed funding of £500,000 from the City of London and £250,000 from the mayor's office, the £27m required to install the lights and maintain them for a decade (roughly £3 million per bridge) has come from philanthropy kickstarted by Hannah and Jacob Rothschild, who first conceived the Illuminated River project.

Represented by Pace Gallery, Villareal has extensive experience producing large-scale illuminations of civic landmarks. In 2013, for instance, he lit up San Francisco's Bay Bridge with 25,000 white LEDs for The Bay Lights project. —[O] 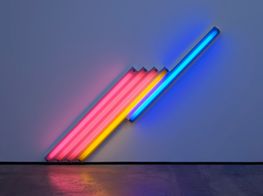 Daniel Nicholas Flavin Jnr was a pioneer light artist and installation-maker associated with the Minimalist movement. Life Raised in Queens, New York in an Irish Catholic family, Flavin was initially attracted to being a priest, but became