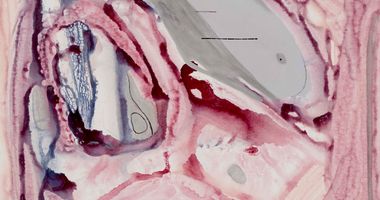 Inhabited by Expressionist figures, Manuel Mathieu's paintings feature forms that are flattened and shapeless, one melting into the other. Flowers appear as crude rings rendered in blue and white, while swathes of green and yellow merge into murky swirls against a smooth blue background in Eternal Flower (2017). In a painting of his late grandmother, titled Self-portrait (2017) because of her influence on him, the back of a human figure is covered in what appear to be flower bulbs. By comparison, human faces are reduced to barely discernible whirls of colour in Rempart (2018), which depicts the artist's grandmother cradling him a baby.

Working with muted and pastel colours, Mathieu manipulates paint by employing techniques such as scratching, rubbing, and layering—at times adding tape and chalk to the canvas surface—to create the ghostly figures and varied textures that characterise his paintings.

Manuel Mathieu draws his subject matter from his personal life. He often takes the year 2015 as a starting point, when he was hospitalised after a motorbike accident and his grandmother was diagnosed with cancer. During his recuperation, the artist contemplated legacies of trauma—both personal and collective—and began to explore the histories of his family and birthplace in his paintings.

The resulting paintings interrogate Haiti's modern history, calling for a revisitation of the past to relieve ongoing trauma in the present. An array of fragmented shapes and what evoke facial features float in Loyalty (2017), a work inspired by the video footage of the funeral of François Duvalier, the Haitian dictator whose totalitarian regime was succeeded by his son, Jean-Claude Duvalier. These paintings were exhibited in Truth to Power, his major solo exhibition at Tiwani Contemporary, London, in 2017.

That same year, Mathieu suffered a second accident—this time in Montreal—that led to the exhibition Nobody is Watching at Chicago's Kavi Gupta in 2018. Compared to the works in Truth to Power, the canvases shown at Kavi Gupta were more personal, revolving around the artist's recovery from his accident.

Manuel Mathieu has also worked with mediums beyond painting, exploring the mutability of shapes as a reference to the body in transformation. His ceramic sculptures, such as those exhibited in his solo show Negroland: A Landscape of Desires at Kavi Gupta in 2021, often consist of shapes that resemble fragments of a larger whole.

In 2018, Self-portrait (2017) became the first artwork by a Haitian-born artist to join the permanent collection of the Montreal Museum of Fine Arts (MMFA). With an aim to help diversify the MMFA collection, Mathieu used the money from the sale to start the Marie-Solange Apollon Fund. Named after his grandmother, the fund is dedicated to acquiring works by marginalised artists for the museum.

With a busy year of exhibitions, new directions continue to emerge in the practice of painter Manuel Mathieu.

The exhibition precedes the artist's major solo show at the Longlati Foundation in Shanghai next year.

Be among the first to know when new artworks and exhibitions by Manuel Mathieu are added to Ocula.
Sign Up Login