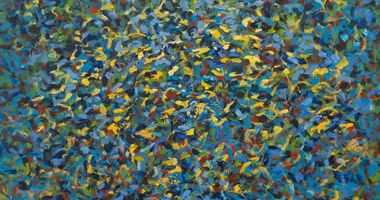 Prasanna held his first solo show at Paradise Road Galleries in 2010. Since 2015, the artist has been refining his style—a blend of saturated pigments applied in rhythmic strokes— emerging as one of the few abstract painters in Sri Lanka's contemporary art scene.

Prasanna's paintings use colour to reflect the motion of light. The resulting paintings achieve a sense of depth through high contrast hues distributed in spontaneous arrangements.

Prasanna's 'Komorebi' (2018) is a series of multi-panel paintings that capture the gradual stages of sunset as seen from below the canopy trees of Colombo, and borrows its title from the Japanese word meaning 'the light shining through the trees'.

In Komorebi XXIV (2018), an acrylic-on-canvas painting, bright yellow sits atop lush green foliage. Light spreads and emerges from beneath the vegetation, reflecting the richness of Sri Lanka's cityscapes and Prasanna's detailed observations.

Prasanna's 'Twilight' (2019) series recovers his existing interest in landscape and flora to recreate the contrast in the sky as the sun sets below the horizon.

In Twilight III (2019), the transition from purple to orange and green to red using short brush strokes shows the city coming to life through complementary hues applied with rhythmic precision. While in Twilight I (2019), bright reds overtake dark splatters of purple and green, suggesting rather a scene inside the city, in which light not only refers to a point in time but the saturation from heat—an aggregation of bodies perhaps, intercepted up close.

Prasanna's work has been shown widely across Colombo, Sri Lanka.

Be among the first to know when new artworks and exhibitions by Ruwan Prasanna are added to Ocula.
Sign Up Login