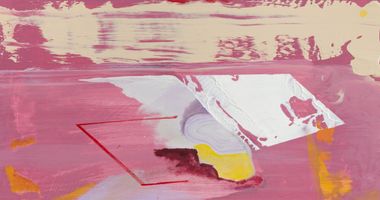 In Walter Price's paintings, fragments of real and imagined words, familiar and invented symbols, and abstract figures come together to form dreamlike spaces.

Born in 1989 in Macon, Georgia, Price served in the US Navy aboard the USS Whidbey Island between 2007 and 2011, receiving his art education through the G.I. Bill. Formally known as the Servicemen's Readjustment Act of 1944, the G.I. Bill covers the cost of training and education for military veterans, and saw Price attend the Art Institute of Washington, from where he received his BA in 2011, followed by an art programme at Middle Georgia College, completed in 2014.

Price's experience aboard the USS Whidbey Island seeps into his paintings through the frequent application of a strong horizon line. Intimately sized, his paintings shift between abstraction and representation, depicting ambiguous narratives through a limited palette. Blue is the primary hue in Elephants view blue (2016–2018), an acrylic painting on wood, where the familiar shapes of sofas are visible against the light blue outline of a staircase. Behind them, a brick wall integrates into the great dark blue shadow. In The Thing that horse ourselves for uncertainty (2018), which was included in the 2019 Whitney Biennial, a car—painted in the dominant colours of orange and red—disappears into a background that is evocative of an urban landscape with a sign that reads, 'think slowly'.

Familiar objects such as cars, bricks, and sofas recur throughout Price's work, helping to 'hold the viewer', he has explained, while allowing them create their own associations. The sofa, for example, usually appears outside, further enforcing his paintings' contextual ambiguity and dreamlike atmosphere. A green sofa sits in the midst of an abstract landscape with a palm tree in i have no idea (2018), for example, while a red one appears in the bottom-right corner of a blue expanse in Follow the land (2018), which is also inhabited by ghostly apparitions that recall humans.

Such fleeting resemblances to the human body can be found in other paintings. Practically on Orbit (2017), an acrylic and pastel on canvas, for example, shows a human head with an afro on a raised platform, with overlapping legs and arms suggesting movement and a sense of rhythm. A similarly dancing figure appears in Not an Attack Vessel (Pedestal Lady) (2018)—here, only parts of the figure's legs are visible, while the body and face have been covered by a cloud of blue that morphs into the brick wall in the background.

Price's interplay of representation and abstraction may bring to mind the work of early American abstract painters such as Arthur Dove, whose modernist compositions also reference the landscape. Their works diverge, however, in Price's use of text, although the words' meanings are not always legible, as in the truncated letters depicted in Florine (2017).

Walter Price's artwork is in the collections of Aïshti Foundation, Lebanon; Fondation Louis Vuitton, Paris; Fondazione Sandretto Re Rebaudengo, Turin; and the Whitney Museum of American Art, New York, among others.

Selected solo exhibitions include We passed like ships in the night at Aspen Art Museum (2019); Walter Price, MoMA PS1, New York (2018); and Walter Price, The Modern Institute, Glasgow (2016). Pearl Lines, a major solo exhibition of Price's work, was held at Karma, New York, in 2016; it was reiterated at the Modern Institute Glasgow and Kölnischer Kunstverein, Cologne, in 2018. Price has participated in international exhibitions such as the 2019 Whitney Biennial and Front International: Cleveland Triennial for Contemporary Art, MOCA Cleveland (2018).

Be among the first to know when new artworks and exhibitions by Walter Price are added to Ocula.
Sign Up Login