Artist Tarek Al-Ghoussein passed away unexpectedly in New York on 11 June after 25 years influencing art making in the United Arab Emirates and beyond. The cause of death has not yet been confirmed.

In a Twitter post, the NYU Abu Dhabi Art Centre described Al-Ghoussein's death as 'a huge loss for the arts in the UAE, across the region and the world'.

Born to Palestinian exiles in Kuwait, Al-Ghoussein lived in the US, Japan, and Morocco in his youth. In 1985, he completed a BFA in Photography at NYU followed by an MA from the University of New Mexico in 1989.

After initially pursuing a career in journalism and documentary photography, he soon turned to art photography.

A documentary instinct and a sense of place and displacement fed into Al-Ghoussein's work. His whimsical and evocative photos capture the landscape, familiar objects, and abandoned spaces of the Middle East.

Al-Ghoussein became a fixture of the developing arts landscape of his adopted home in the UAE from the early 2000s. His work was displayed at the UAE Pavilion at the 53rd Venice Biennale in 2009. He returned to the event representing Kuwait in 2013. 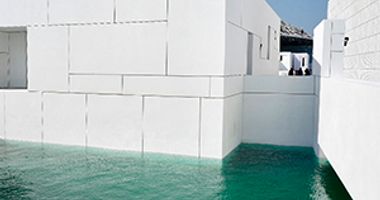 Al-Ghoussein's last major project, the photographic series 'Odysseus', remains unfinished. Setting out to document all 214 of Abu Dhabi's coastal islands, only a part of the series could be shown at Louvre Abu Dhabi's Art Here 2021 Richard Mille Art Prize exhibition.

Tarek Al-Ghoussein influenced a younger generation of artists first as a professor of photography and media at the American University in Sharjah and then as Professor of Visual Arts at NYU Abu Dhabi.

Lateefa bint Maktoum, who showed alongside Al-Ghoussein at the exhibition Emarati Expressions in 2011, praised the artists' mentorship.

'He was a brilliant photographer, a professor and to many students a father figure,' she said. 'He may not have had his own children but I know that the students that he taught will mourn his loss as if they lost their own father.'

An obituary shared by Third Line Gallery said Al-Ghoussein 'captured images of places and objects that would soon cease to exist, preserving the narrative of the spaces and their former inhabitants.'

'We will deeply miss our friend and artist, may his soul rest in eternal peace,' the gallery said. —[O]

More than 150 artists will present work when the Emirati exhibition takes place for the 15th time.

Ocula Magazine explores some of the U.A.E.'s must-see exhibitions this spring.