The gallery currently represents eight artists, including Eniwaye Oluwaseyi and Zandile Tshabalala, both of whom have upcoming solo shows at the gallery. Mba is also trying to recruit two African diaspora artists in the United States and Canada, and planning shows with established artists who haven't yet exhibited in the region.

Mba worked in London as an editor and art advisor prior to opening the gallery in what has proven a turbulent year. The opening was scheduled for March when the pandemic went global, but she said she was grateful for the extra time it afforded her, both to develop her exhibitions and for the art world to start taking notice of Africa.

'The global market has increasingly turned its attention to African and Black artists as viable creators and worthwhile sources of investment – which made the opening of ADA all-the more timely,' Mba said, though she admits the sudden interest in African artists has been overwhelming at times.

'When I started my career, artists from the continent were nonexistent – I once had clients who flagged that they had rather "get a Banksy print" than invest in an African artist's work,' she said. 'Today, it appears that interest for the latter is not only constant but continuously increasing.'

So much so that Mba wondered if it was sustainable or a market bubble that would soon burst.

Nevertheless, she said, 'I actively believe in the durability of Africa's creative scene, and by developing it from the inside and affirming it internationally, we are also acting to strengthen it and make it increasingly independent from a shifting, sometimes deceptive global demand.'

Mba chose to open her gallery in Ghana for several reasons: it is her home, she is familiar with the dynamics at play, and she said she feels a duty to help develop the country's art industry.

'Being half Nigerian, Lagos was also an option, but it was clear that the art scene there is already bustling. Nigerians buy art, invest in it, have galleries, museums, art fairs.'

In Ghana, she said, the art scene is less developed, despite the meteoric rise of artists such as Amoako Boafo.

'Ghanaians are only just starting to see the benefits, both social and economic, of a solid art industry and community,' she said. 'The issue at this stage is the local buyers market, which could be stronger. We also do not have enough infrastructure to support the talent which we produce, leading many creatives to develop their careers in Europe or the United States instead. With the needed galleries and museums, artists would remain; and this is one aspect which I am actively working to change.'

'I am confident that Ghana will grow to become the new art hub of Africa,' she said. 'Looking at the most prominent artists these days, many are from Ghana – the talent is clearly there and waiting on a much-anticipated attention.' —[O] 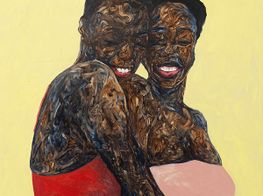 Known for his empowering fingertip paintings, Amoako Boafo is a Ghanaian-born contemporary artist based in Vienna. Among other exploits, Boafo has collaborated with fashion house Dior and launched an artwork into space with Blue Origin and the

A spate of new residencies aims to redress the underrepresentation of African artists in the West.