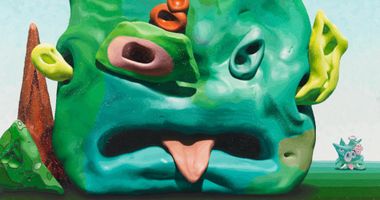 Simone Leigh is an American artist known for her sculptures, videos, installations, and public projects that explore historical and contemporary racism in the United States and the subjective experiences of Black women. With a background in ceramics, Leigh often works with materials, forms, and techniques drawn from traditional African art.

Leigh is perhaps most known for her 'Anatomy of Architecture' series (2016–ongoing), which combines images of Black women with forms drawn from traditional and contemporary architecture and cultural iconography. Her references include early Egyptian terracotta pottery and 19th-century African American face jugs. Jug (2019), for example, is a two-metre bronze sculpture of a woman. Her lower body is bell-shaped, evoking both a jug (with the handle) and a wide hoop skirt.

The 16-foot-tall bronze statue Brick House (2019) is the first monumental public work in 'Anatomy of Architecture'. Taking its title from an expression that refers to the strength of Black women, Simone Leigh portrays a Black woman with an afro and cornrow braids with cowrie shells, referencing architecture including Mousgoum dwellings and a restaurant in Mississippi. Brick House is also the first work to appear on the High Line Plinth in New York.

Simone Leigh's ongoing concern with the representation and welfare of Black women in the United States has led her to create community-based alternatives to the country's healthcare system. In 2014, she collaborated with Stuyvesant Mansion in Brooklyn, New York, to create Free People's Medical Clinic, which provided services including free medical screenings and therapy sessions.

Operating in a similar vein, Leigh's solo exhibition The Waiting Room (2016) at the New Museum in New York included community workshops in acupuncture and herbal medicine, amongst other topics. The Waiting Room was dedicated to Esmin Elizabeth Green: an African American woman who died in 2008 in a hospital receiving room while waiting to be seen. In an article for the Guardian in 2016, Leigh noted that the Green case underscored 'the lack of empathy people have towards the pain of black women.'

Simone Leigh was awarded the prestigious Hugo Boss Prize in 2018, which led to her solo presentation Loophole of Retreat at the Solomon R. Guggenheim Museum, New York, the following year. She has participated in a number of major international fairs, including the 10th Berlin Biennale (2018) and the Whitney Biennial 2019. In 2022, Leigh will be the first female African American artist to represent the United States at the Venice Biennale.

The fifth edition of the triennial was delayed first by the pandemic and then Hurricane Ida. Artistic Directors Naima J. Keith and Diana Nawi were undeterred, emphasising that the event was 'born out of a time of hardship'.

We were amazed by these two sculptures by Bruce Nauman and Thaddeus Mosley showing last weekend at London Gallery Weekend.

Be among the first to know when new artworks and exhibitions by Simone Leigh are added to Ocula.
Sign Up Login