Hermann Nitsch Died the Day Before His Bloody Venice Exhibition 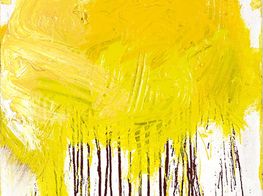 Austrian action artist Hermann Nitsch died at age 83 on 18 April, the same day VIPs attended a dinner in Venice to celebrate the exhibition of his 20th Painting Action (1987).

In a statement, the Nitsch Foundation said, 'We deeply mourn the death of Hermann Nitsch not only for his contributions to the world as an actionist, painter, graphic artist, and composer, but also as a husband, father, friend, mentor, and companion.'

Austrian President Alexander Van der Bellen testified to the artist's importance, tweeting, 'His work will live on, I'm sure of it.'

The work is being presented by owner Helmut Essl and Vienna's Galerie Kandlhofer. It is Nitsch's only painting action that remains in one collection.

Nitsch created the work at the Vienna Secession Building, which was built in 1897 to exhibit works by artists such as Gustav Klimt and Joseph Maria Olbrich following their break from the official Vienna Academy of the Arts.

In his lifetime, Nitsch likewise sought to push artistic boundaries, bridging painting, performance, and ritual, incorporating materials such as peaches, tomatoes, sugar cubes, and flowers, as well as blood and guts.

First performed in 1975, the play incorporates up to 500 performers, blood, faeces, viscera, incense, vinegar, milk, urine, petrol, turpentine, ammonia, and 13,000 litres of wine in an experience that seeks to transcend language.

'The 6-Day-Play of the O.M. Theatre aims to be the greatest and most important celebration of peoples—it is an aesthetic ritual glorifying existence,' Nitsch said. —[O]